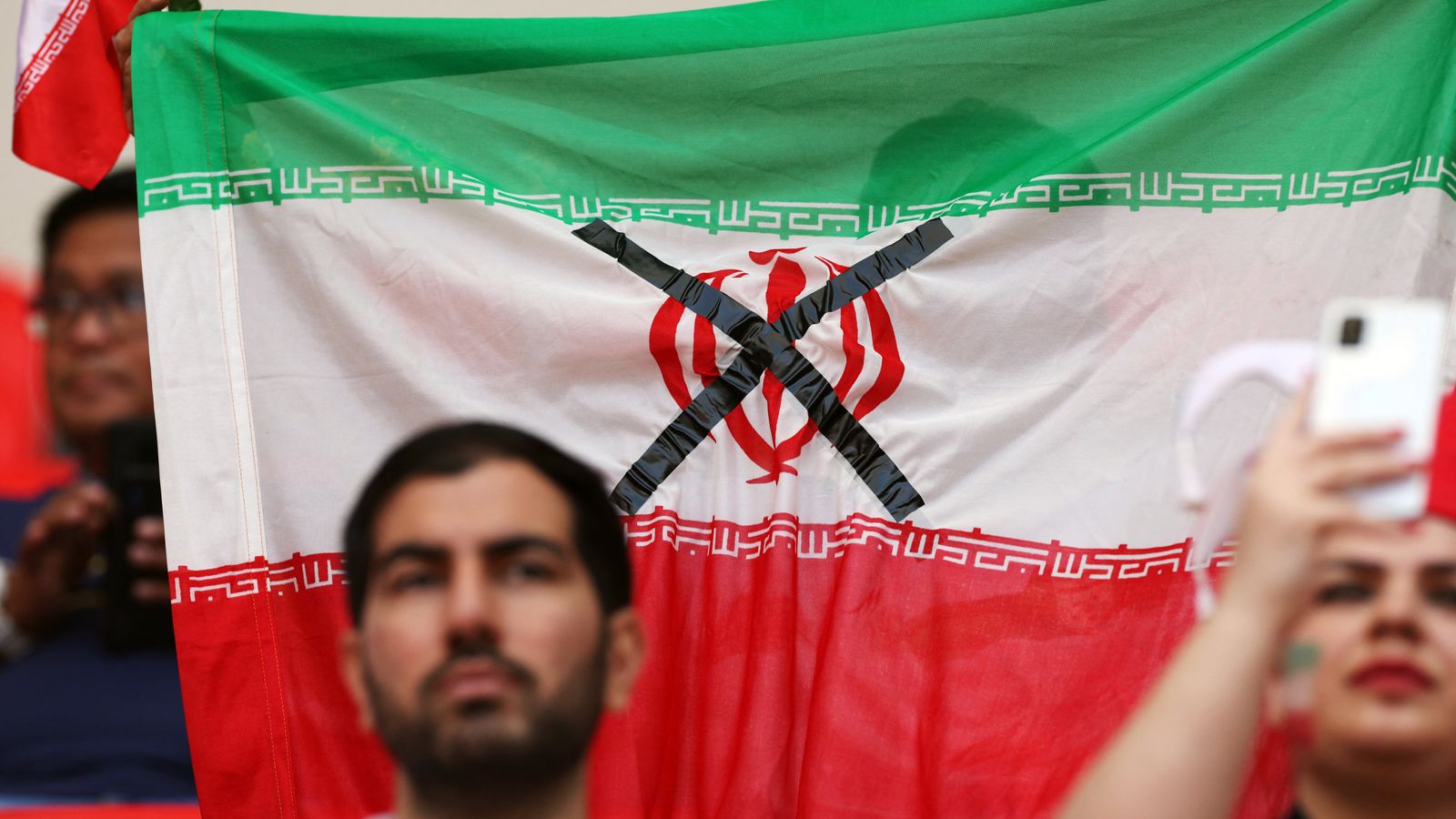 Pro-regime supporters and anti-government protesters confront each other outside the Ahmad bin Ali Stadium in Al Rayman, Qatar, ahead of Iran's Group B match against Wales.

On-going protests in Iran threatened to overshadow the country's second match at the World Cup as pro-regime supporters and anti-government protesters confronted one another ahead of kick-off.

As fans prepared to take their seats at the Ahmad bin Ali Stadium in Al Rayman, Qatar, for the Group B match against Wales, those with differing political views confronted each other outside the venue.

Outside the security checkpoint, some fans shouted "women, life, freedom", while others shouted back "The Islamic Republic", according to Associated Press reports. 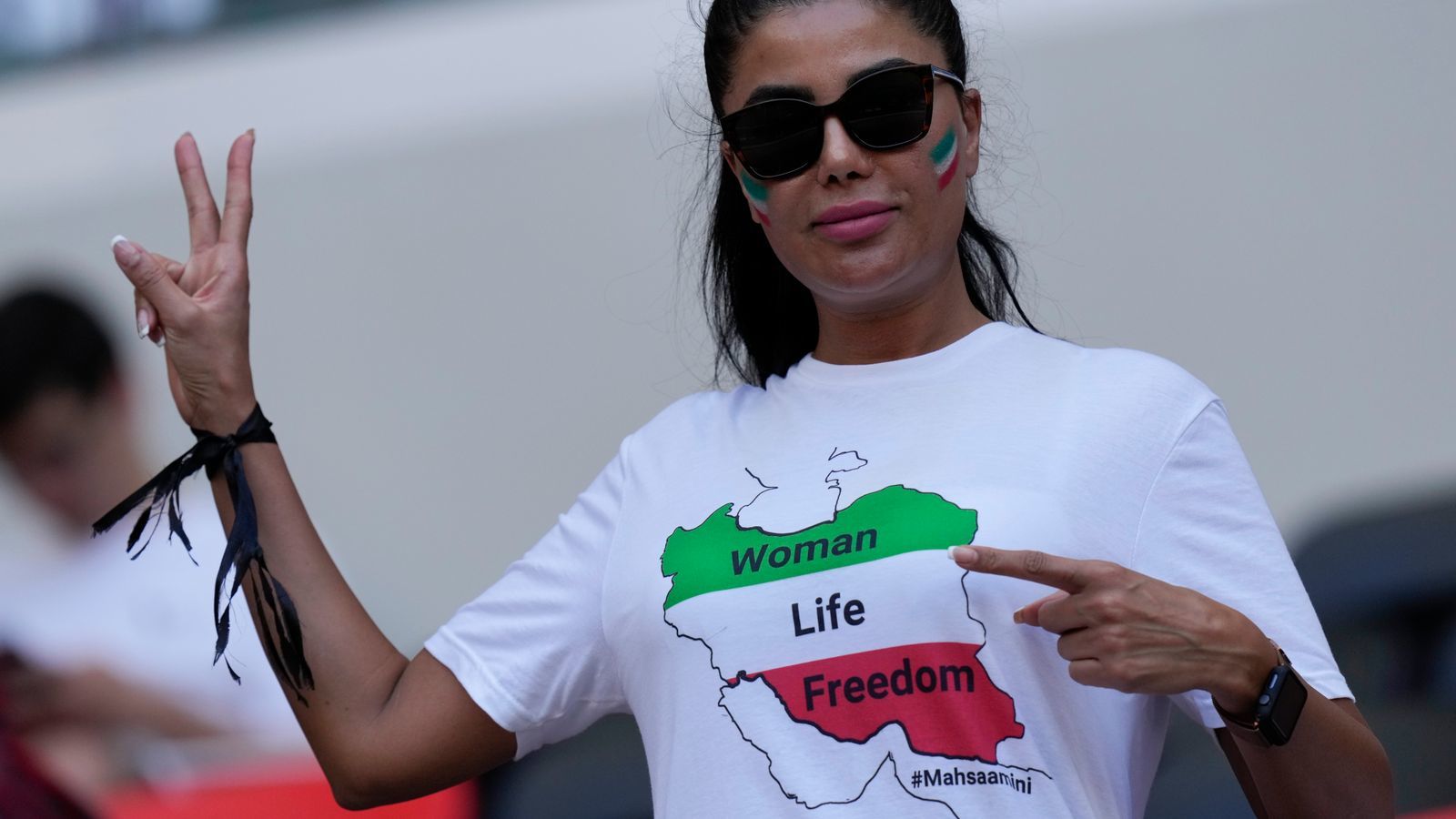 Some Iran fans confiscated Persian pre-revolutionary Iranian flags from supporters, and shouted insults at those wearing shirts with protest slogans.

Small groups of men angrily chanted "The Islamic Republic of Iran" at women giving interviews to foreign journalists about the protests.

Many female fans appeared visibly shaken as Iranian government supporters surrounded them with national flags and filmed them on their mobile phones.

Widespread demonstrations have followed the death of Mahsa Amini, a 22-year-old woman who died in the custody of Iran's morality police in September after being detained for alleged violations of the country's strict dress code. 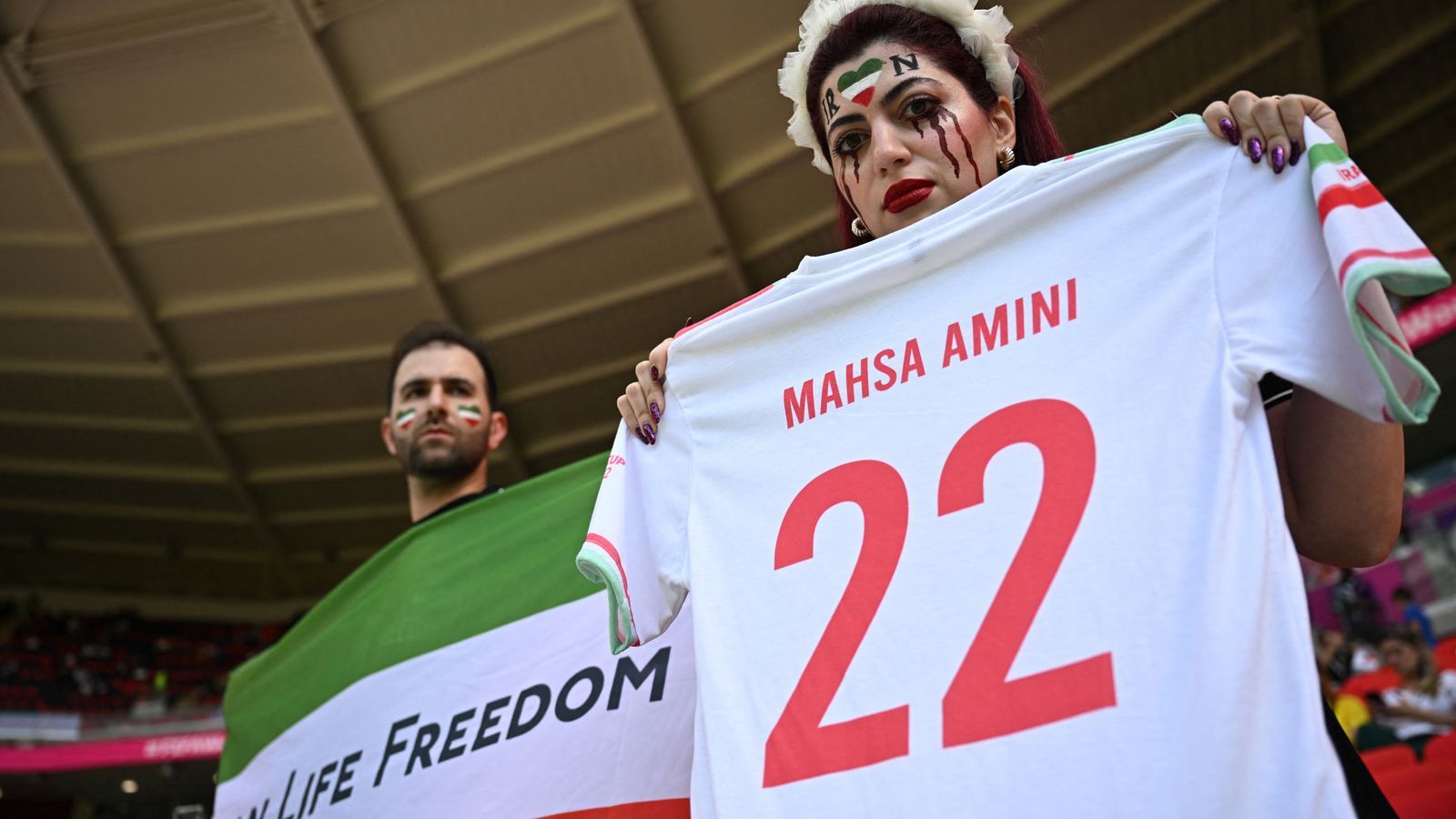 One pair of supporters were pictured inside the stadium - a woman wearing a T-shirt with "Mahsa Amini" printed on it, and a man holding aloft an Iranian national flag with the protest slogan, "Woman, Life, Freedom".

They were later spotted being confronted by officials, who appeared to confiscate the flag. 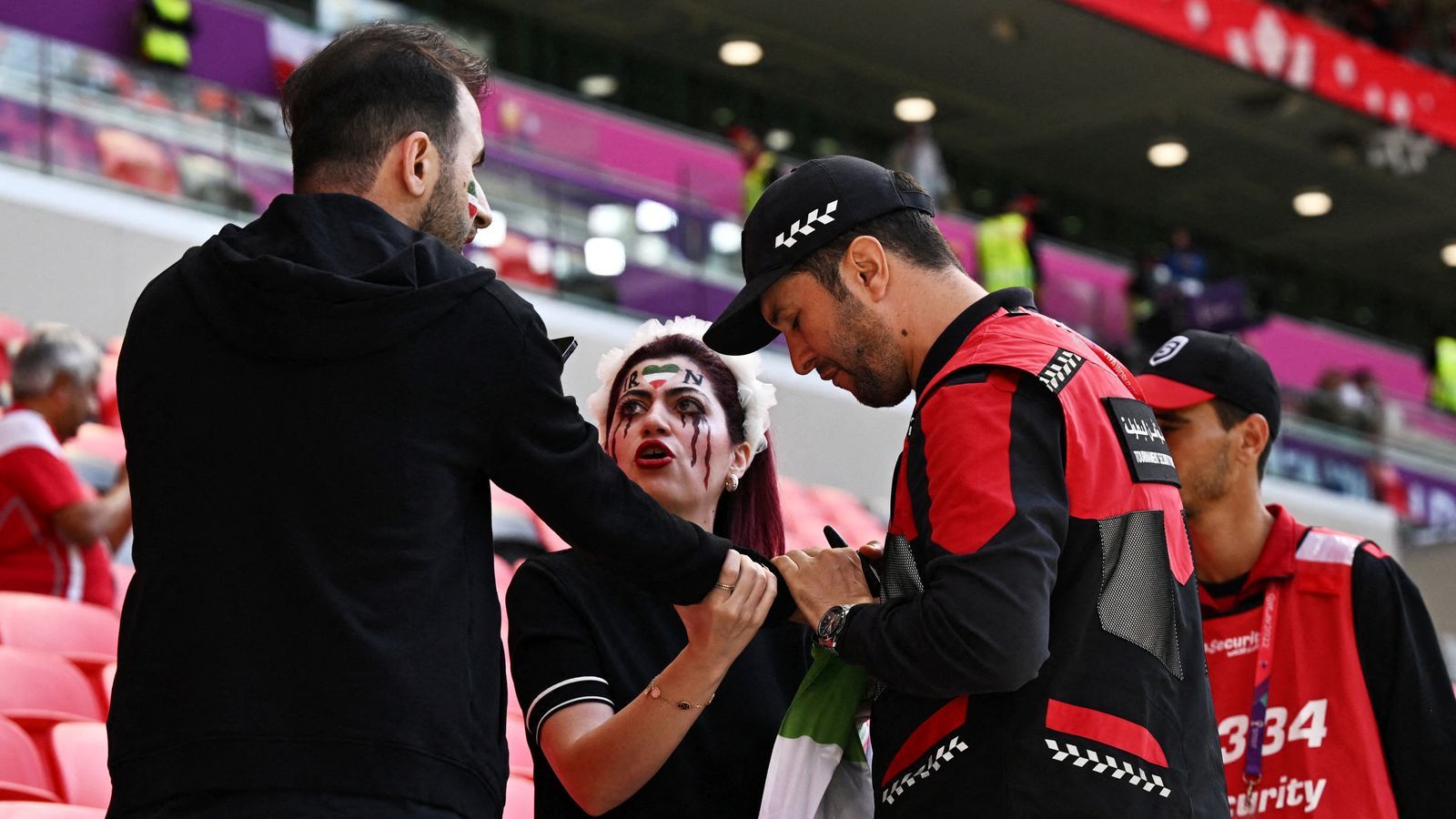 While protests took place both inside and outside the venue, they did not spill on to the pitch today.

Iran's players, who had refused to sing their national anthem before the start of their World Cup opener in Qatar against England on Tuesday, this time chose not to remain silent.

Loud jeers were heard from Iranian supporters as the anthem played, with the team appearing to sing quietly.

Some fans were visibly moved to tears during the national anthem.

The gesture of staying tight-lipped has been interpreted as a sign of solidarity - the Iranian team putting themselves firmly on the side of the wave of protests back home.

There were fears after the England match the players could face repercussions for their actions. 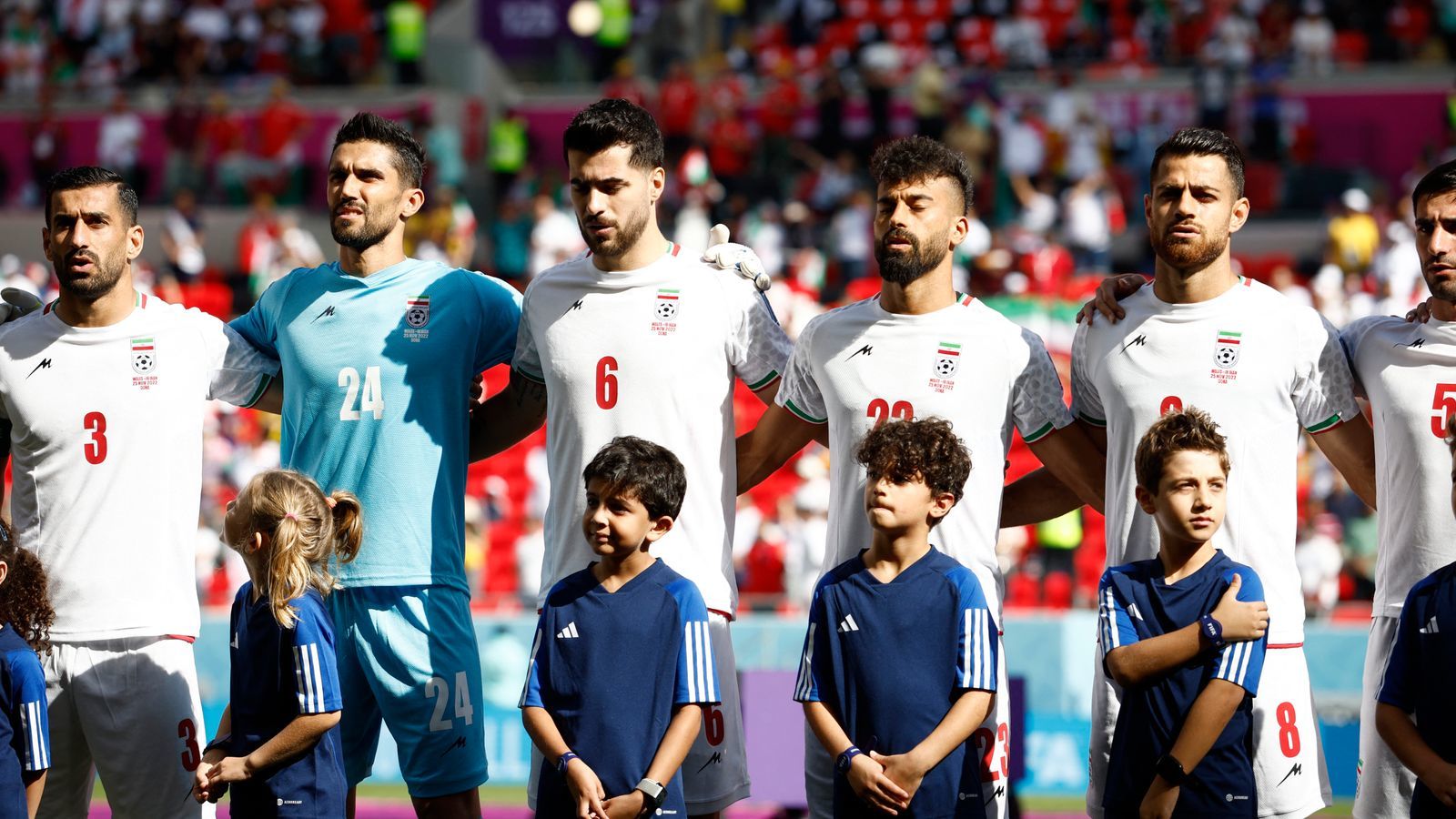 Iranian authorities have responded with deadly force to suppress protests that have marked one of the boldest challenges to its clerical rulers since the 1979 Islamic revolution.

State television did not show footage of the players lined up for the start of the match against England, which they lost 6-2 to the Three Lions.

The only official reaction has come from Iranian government spokesman Ali Bahadori Jahromi, who tweeted, "We love Iran's national team, in all circumstances", after that game.

Team Melli, as the football team is known, have traditionally been a huge source of national pride in Iran, but they have found themselves caught up in the country's political turmoil.

Asked on Thursday about the unrest at home striker Mehdi Taremi said they were in Qatar to play football.

"We are not under pressure," he added - after they refrained from singing the national anthem in their first match.