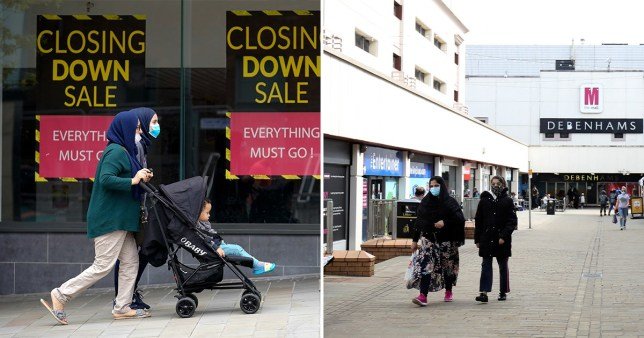 Infection rates drop in some of England’s worst affected areas

The three areas most at risk of going into local lockdowns because of coronavirus spikes are now seeing their infection rates rapidly falling.

Oldham, Blackburn with Darwen and Pendle in north west England have all apparently turned a corner in their battle to reduce the number of new cases of the virus.

This is the highest rate in England, but it is down from 95.3 in the seven days to August 14.

Residents in these areas have faced restrictions on socialising with others outside of their household since the beginning of August.

Oldham in particular was said to be ’48 hours away’ from a more severe lockdown being imposed last week which could have seen pubs, restaurants and gyms closed.

The council leader Sean Fielding said this would have been ‘catastrophic’ for the town and the Government decided against stricter measures after reviewing the latest data.

Oldham was ’48 hours away’ from a local lockdown

The statistics for every local authority area in England have been compiled by the PA news agency, based on Public Health England data. They cover the seven days to August 21 and are based on tests carried out in both laboratories and the wider community.

Northampton topped the list of worst-affected areas last week, primarily because of a big outbreak in a sandwich-making factory.

The East Midlands town has seen its rate drop massively this week to 35.6 from 116.6. While signs that measures are working in some of the worst-affected areas, new spikes are developing elsewhere in the country.

Redditch, near Birmingham, has seen its infection rate increase massively to 29.3, compared to just 4.7 in the previous week.

The rate in Oadby and Wigston in Leicestershire has also increased to 31.6 from 26.3. Oxford, Corby and Kettering are also seeing higher rates of infection than the week before.

Leciester was the first place to go back into lockdown

In Stoke-on-Trent the infection rate has continued to rise, days after the council issued a lockdown warning.

The figures show 47 new cases were detected in the seven days to last Friday, and this saw the city’s infection rate rise from 18.3 to 28.9 cases per 100,000 of the population. Abi Brown, leader of Stoke-on-Trent City Council, last week warned lockdown was on the cards if the trend continued. She said:

‘You can’t look at the national news without another city-wide lock-down coming into force or being discussed. ‘We don’t want to be the next one – the next seven days is a critical time for the city so let’s all play our part, protect our loved ones and avoid lock-down.’