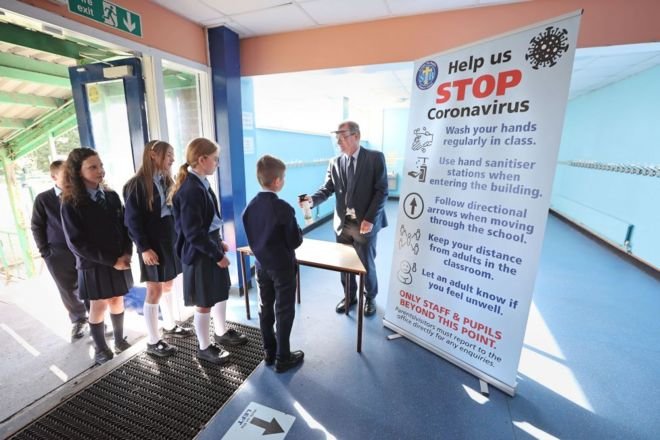 Government has 'fingers in ears' over 2021 exams

Ministers are being accused of "sticking their fingers in their ears" over the possibility that next year's public exams may have to be cancelled.

It argues that as the situation develops, using a system of centre assessed grades may become inevitable.

The government is considering a slight delay GCSE and A-levels next summer.

But NEU joint general secretary Mary Bousted said this was a position that was becoming "increasingly untenable" and teachers urgently needed to know what evidence of pupil achievement they needed to collect so fair assessments could be made.

Her comments come a day after national attendance figures revealed one in six secondary schools were not fully open to all pupils last week, with 16% having to send at least some pupils home to self-isolate amid a rise in virus cases. 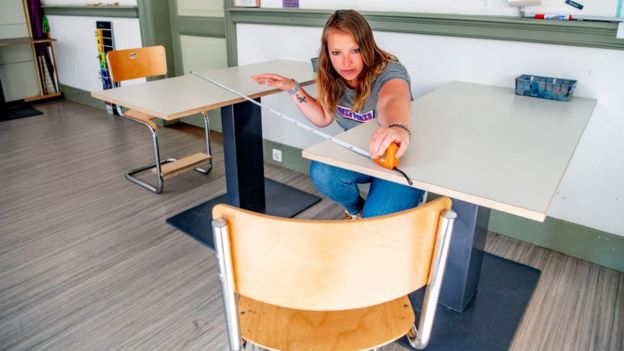 It also comes after the vice-chancellors of several universities called for next year's exams to be cancelled, and for the focus to be on pupils catching up missed learning instead.

"All of that makes it more and more difficult to see that students will get the opportunity to consistently be in school across the country," she said.

"As the situation develops it may become inevitable that what we have to move to is a system of centre-assessed grades... everybody appears to agree that this is a real possibility - that we won't be able to do exams.

"The only body which is sort of sticking its head in the sand, sticking its fingers in its ears, is the government, and that is what they have done consistently in this crisis. 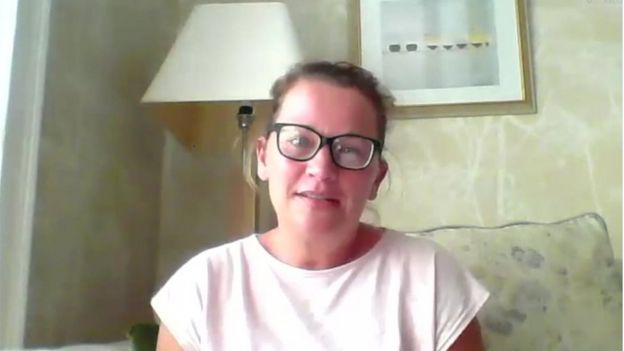 Some teachers are teaching from home via video link

"They seem to think that if you will something it will happen, despite the increasing evidence that there are going to be massive problems with that."

Vice-chancellor at Sheffield Hallam University and education expert, Professor Sir Chris Husbands said: "The challenge for next year's students is in many respects bigger than the challenge for 2020 students.

He told BBC Radio 4's World at One Programme: "If you are coming up to your A-levels in 2021 for many students, the coverage of the syllabus is going to be a lot more patchy."

Professor Sir Chris, who has advised successive governments on education, said it would be very difficult to find a valid assessment system in this situation.

The NEU is due to debate a motion at a conference this weekend calling for students to be given more choice in exams, but Dr Bousted suggested it may be overtaken by events.

"So the motion was written a time ago, it's a fast moving situation, and we are certainly thinking the vice chancellors are raising absolutely real concern.

"They need to be reacting to them and planning appropriately, because the last thing we need - but the danger is increasing that we end up with - is another fiasco next year because the government is willing something that they haven't worked to achieve."

GCSE and A-level exams were cancelled last March because of the coronavirus pandemic, but the system of assessment set up to replace them was later found to be flawed, leading to exam grades being cancelled and re-issued.

"We don't know how many of those closures are exam classes ... but we are hearing of whole Year 11s being sent home on public health advice, we are hearing of that in some inner London boroughs, where cases aren't as high as other areas.

"So that pattern is developing of year groups being at home, exam year groups and that has a huge implication of how you fairly assess children next year.

"The government just seems to think it can ignore all this data. The height of ambition seems to be whether there is a one week delay or three week delay in exams and that just isn't going to cut the mustard on how you lead to fairness in exams next summer."

All the major teaching unions have been calling for a "plan B" on exams in the event that disruption to children's learning continues, even if schools remain open.

Last week Education Secretary Gavin Williamson told the Education Select Committee it was "vital and so important that we get the exams series up and running for 2021".

A DfE spokesman said it was working with Ofqual and the exam boards on an approach that recognises that students will have experienced "considerable disruption" to their education last year.

"There are a range of measures proposed by Ofqual following a public consultation, including a possible short delay to the exam timetable and subject-specific changes to reduce pressure on teaching time.

"We will continue to work with school and college stakeholders, Ofqual and the exam boards, to ensure that exams in 2021 are fair," he added.

The NEU also called for Sats - the tests sat by children at the end of primary school - to be axed next year so teachers could focus on helping pupils to catch up.

Mr Courtney said Sats would be "absolutely pointless" this year as a measure of school performance, because of the uneven pattern of attendance.

"We hope that the government will see sense and say that the Sats don't happen this year.

"If the Sats are going ahead, we believe many head teachers will not play the game this year."