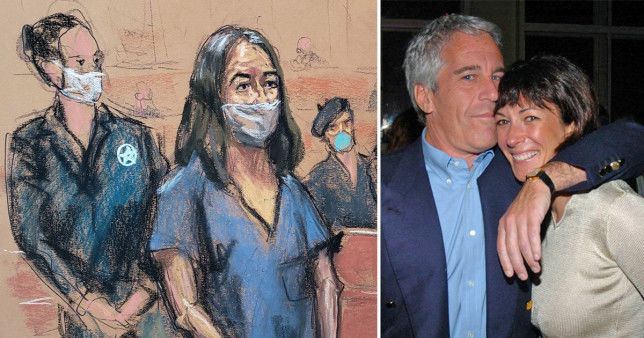 Ghislaine Maxwell appeared in federal court on Friday afternoon for the first time since she was arrested last year, looking drab and far different from her days as a British socialite.

Dressed in a blue smock and navy trousers, Maxwell had her ankles in shackles. Her eyes looked sunken and her hair, once black and in a pixie cut, was graying at the roots and grown below her shoulders. Her arms appeared frail.

Maxwell, 59, pleaded not guilty to an eight-count superseding indictment alleging that she conspired with and aided the late convicted sex offender Jeffrey Epstein in sexually abusing four underage women. 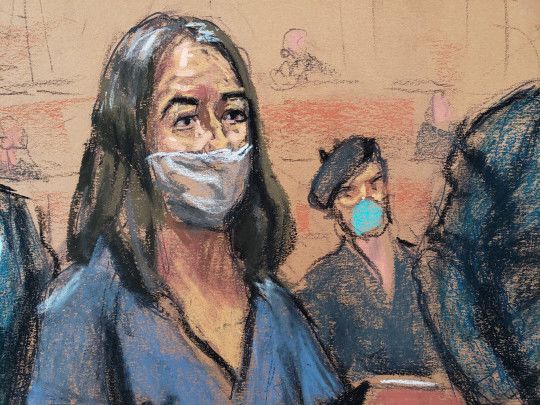 A courtroom sketch of British socialite Ghislaine Maxwell during her arraignment hearing on a new indictment at Manhattan Federal Court in New York on April 23, 2021

‘Yes, your Honor’, Maxwell said when the judge asked if she had received a copy of the indictment.

‘I have, your Honor’, Maxwell replied when asked if she had reviewed it with her lawyers.

As Maxwell affirmed she had understood the superseding indictment and waived its public reading,

Two US marshals sat behind Maxwell as she indicated she understood the indictment and waived the public reading. The marshals quickly got off their seats when Maxwell got up to leave. Maxwell removed her mask and took a sip from a water bottle before being escorted out to return to jail. 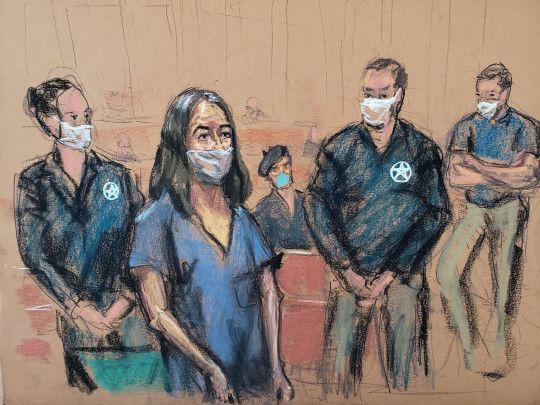 ‘She’s looking forward to fighting’, Maxwell’s family attorney David Markus told reporters outside the courtroom. ‘She has been treated horribly’.

Judge Nathan did not rule on whether Maxwell’s trial would proceed as scheduled on July 12. Nathan said she would come to a determination on the trial date soon and advised the parties to continue preparing for the original date.

Maxwell seeks a continuance of her trial until fall 2021 or winter 2022, while the government is fighting a delay.

She was arrested in July after being accused of recruiting teenage girls for American financier Epstein to abuse. The indictment alleges that Maxwell groomed a girl to engage in sexual activity with Epstein by giving her lingerie and cash and encouraging her to bring other young girls to massage Epstein. 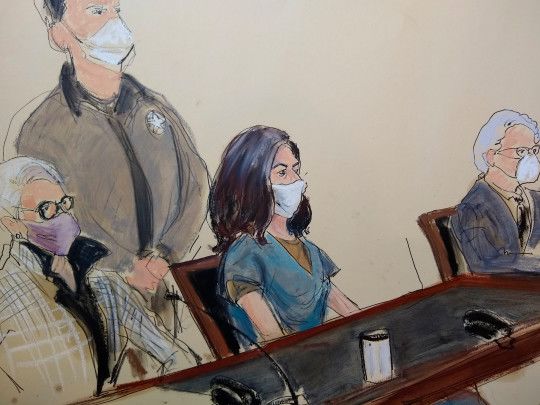 Ghislaine Maxwell, center, appears in Manhattan Federal Court flanked by her attorneys, Bobbi C Sternheim, left, and Jeff Paugliuca, right, and a US Marshal, rear, during her arraignment on a superseding indictment

The British socialite has been behind bars in Brooklyn jail and appeared for her arraignment on two sex-trafficking charges that federal prosecutors added to her indictment in March.

Maxwell requested that her hearing be held in person after apparent supporters of the QAnon conspiracy theory illegally live streamed a remote hearing she had in January for different civil case.

Epstein killed himself while incarcerated in Manhattan in August 2019.