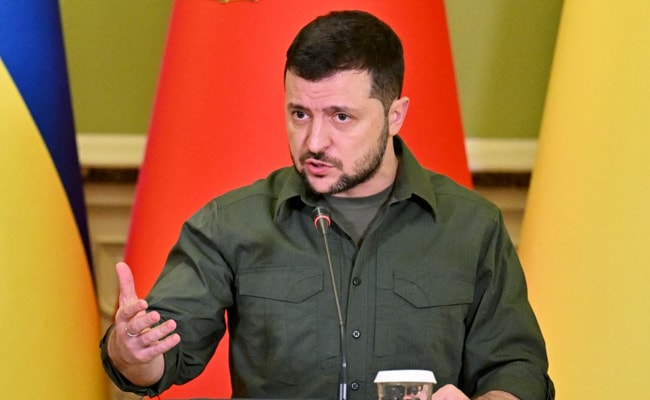 Russia-Ukraine War: Zelensky said "greater unity" in the bloc was the only effective way to counter Russia, stressing Kyiv has shown how important unity can be while battling the Russian invasion.
Ukraine's President Volodymyr Zelensky urged the EU on Monday to end internal "quarrels" saying they only helped Moscow and asked the bloc to adopt more sanctions against Russia.

"All quarrels in Europe must end, internal disputes that only encourage Russia to put more and more pressure on you," Zelensky told an EU summit in Brussels via video-link.

"It is time for you to be not separate, not fragments, but one whole," he said, calling for a new set of sanctions against Russia, including a ban on Russian oil.

EU divisions have slowed the adoption of another sanctions package against Russia, with Hungary saying it will not back an oil embargo against Moscow.

"It is clear that there should be progress in sanctions against Russia," Zelensky said.

"Unfortunately, for a reason that escapes me, we are still not there," he added, as Hungarian Prime Minister Viktor Orban remains the main obstacle to agreeing an embargo on Russian oil.

Zelensky said "greater unity" in the bloc was the only effective way to counter Russia, stressing Kyiv has shown how important unity can be while battling the Russian invasion.

"If someone torpedoes a ship, it's impossible for one or more cabins to have hope to stay afloat when others drown," Zelensky said.

He also said he hoped that those EU countries that oppose fast-tracking Kyiv's EU candidacy status will "change their minds."

"We have met all the necessary criteria for this status," the Ukrainian leader said.

Ukraine has been angered by German Chancellor Olaf Scholz's comments that Kyiv's bid to join the EU cannot be sped up despite Russia's invasion.
#Viktor Orban

Ken 31 days ago
Fuck you. He sounds like he is the boss not just some comic sucking dick for more free stuff and money from everyone in the world
View all comments (1)Add comment