Face coverings will become mandatory again in shops and on public transport in England from next week as part of measures to target the new coronavirus variant, Omicron, the PM has said.

PCR tests for everyone entering the UK will be introduced and all contacts of new variant cases will have to self-isolate, even if fully jabbed.

But Boris Johnson said Christmas would be "considerably better" than in 2020.

The measures were "temporary and precautionary", he added.

Mr Johnson announced the restrictions at a Downing Street news conference after it was confirmed that two Omicron cases had been detected in Brentwood, Essex, and Nottingham. Officials said the cases were linked and connected to travel in southern Africa.

The new variant was first reported from South Africa on Wednesday, with early evidence suggesting it has a higher reinfection risk.

Mr Johnson said: "Our scientists are learning more hour by hour, and it does appear that Omicron spreads very rapidly and can be spread between people who are double vaccinated."

He added: "We need to slow down the spread of this variant here in the UK, because measures at the border can only ever minimise and delay the arrival of a new variant rather than stop it all together."

The prime minister said the new measures would be reviewed in three weeks, by which time they should have better information about the "continuing effectiveness" of vaccines.

The prime minister said the "tightening up" of the mask rules will be outlined by Health Secretary Sajid Javid "in the next day or so". He did not indicate when PCR tests would begin and in a press release the Department of Health only said it was among the measures being "introduced from next week".

Covid restrictions were tightened across the UK days before Christmas last year amid a surge in cases.

Asked by the BBC's Iain Watson if the prime minister could say with any confidence whether or not people could keep their Christmas plans this year, Mr Johnson replied: "We continue to be in a strong position largely thanks to the speed of the vaccine rollout, another booster rollout, and... I'm pretty confident to absolutely confident this Christmas will be considerably better than last Christmas."

Countries around the world are introducing travel bans and restrictions on southern African countries in an effort to contain the variant's spread.

*  All contacts of suspected Omicron cases must self-isolate, regardless of whether or not they are fully jabbed

*  The health secretary is to ask advisers to consider rapidly extending boosters, including reducing the gap between the second dose of the vaccine and the booster

The UK's chief medical adviser, Prof Chris Whitty, said there was a "reasonable chance" that vaccines could be less effective against the new variant but stressed people who are vaccinated or receive the booster jab will be less likely to become seriously ill.

He said the Joint Committee on Vaccination and Immunisation would now need to decide whether to extend the booster vaccine down to adults age 18, and whether a second dose should be offered to children aged 12-15.

The reintroduction of masks in shops and public transport brings England back into line with the other UK nations.

Paddy Lillis from the shopworkers' union Usdaw accused ministers of "flip-flopping on basic and sensible Covid measures" and said the face covering rules should have been kept in place when restrictions were relaxed in July.

"Retail staff working with the public every day are deeply worried about catching Covid-19 and the arrival of the Omicron variant is a further concern," he said.

Carol Popplestone, chairwoman of the Royal College of Nursing, said face coverings were "something we have already called for and it should not have been a new variant that forced the prime minister to act".

This is a moment the government had wanted to avoid.

We've got used to restrictions in England being lifted. But for the first time in months, they're now being re-imposed in response to the new variant.

And these restrictions could have a significant impact.

For example, anyone who goes on holiday will now need to pay for a PCR test and self-isolate until they get a negative result. If Omicron spreads quickly, there could be a lot of people forced to self-isolate for 10 days as close contacts.

But the government hasn't gone for its full plan B. Masks won't be mandatory in hospitality settings in England like they are in Scotland and Wales.

People aren't being told to work from home - and there still aren't plans for vaccine passports.

But it's a sign of the uncertainty and concern in Whitehall that Boris Johnson felt he had to announce these measures.

Both the UK cases of the Omicron variant and their households are self-isolating. Additional testing is being carried out at locations where those people were likely to have been infectious.

"Confirmed cases and contacts are being followed up and requested to isolate and get tested as necessary," the Department of Health said.

Ten countries - South Africa, Namibia, Zimbabwe, Botswana, Lesotho, Eswatini, Angola, Mozambique, Malawi and Zambia - are now on the UK's travel red list meaning, from Sunday at 04:00 GMT, all arrivals will have to quarantine in a hotel for 10 days.

Other countries are also introducing travel bans and restrictions on southern African countries in an effort to contain the variant's spread.

The average number of daily confirmed Covid cases in the UK began rising again in early November. A further 39,567 confirmed cases were announced on Saturday. 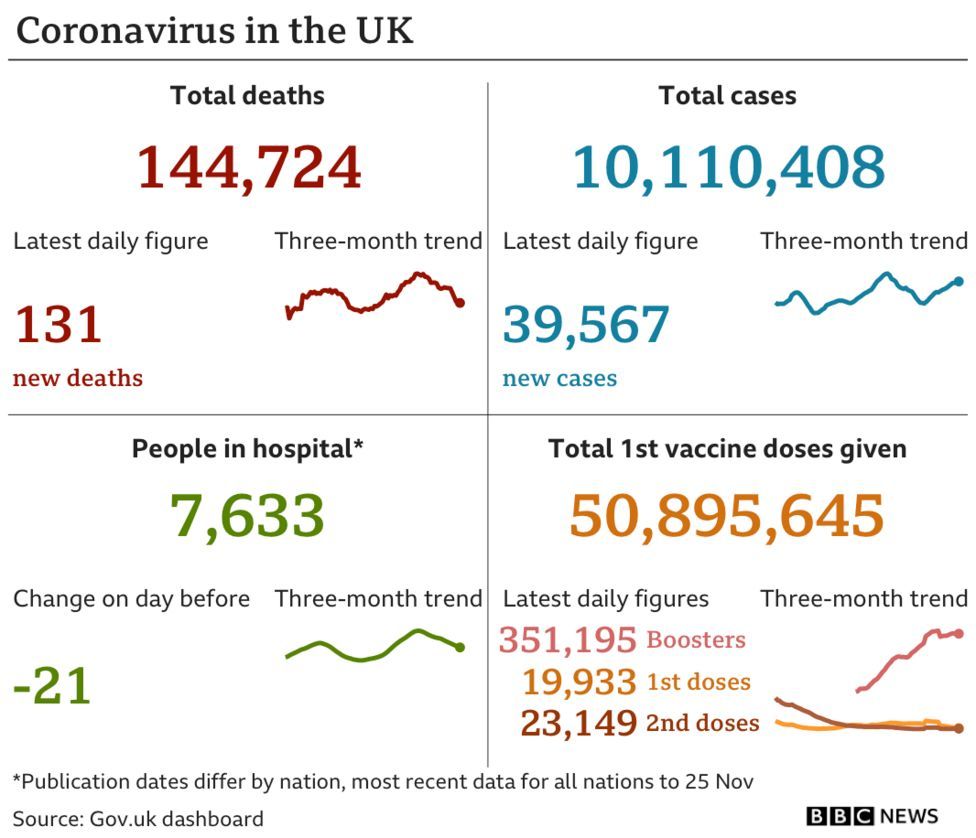