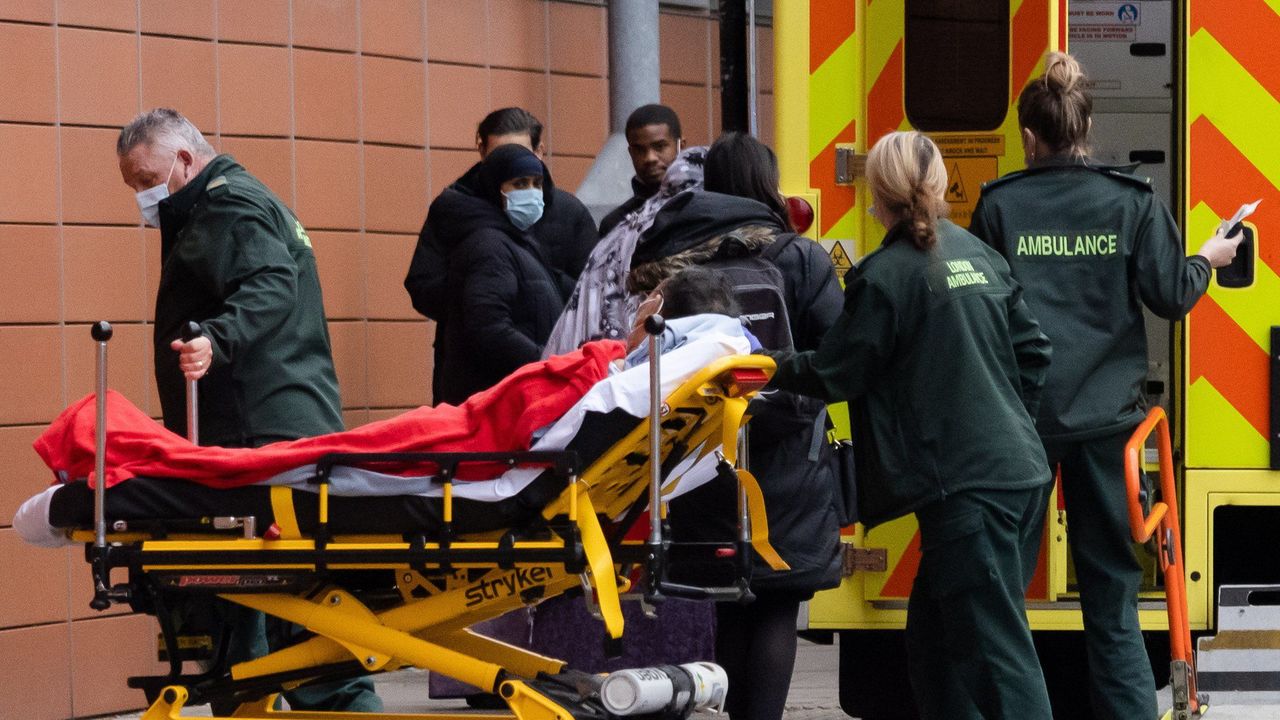 Covid: Boris Johnson plans to 'ride out' Omicron wave with no more curbs

Boris Johnson says he hopes England can "ride out" the current wave of Covid-19 without further restrictions.

But he acknowledged parts of the NHS would feel "temporarily overwhelmed" amid a surge of Omicron cases.

The prime minister said there was a "good chance" he would not impose fresh measures and would recommend continuing the government's "Plan B" strategy in England to ministers on Wednesday.

The testing regime from 10 January will be for key industries including food processing, transport and the border force, in order to reduce the spread of the virus to colleagues.

The PM said at a Downing Street briefing he will recommended England sticks with Plan B restrictions, when cabinet ministers meet to discuss extending them.

The measures - which include working from home where possible, mask wearing in most public settings and Covid passports in some venues - are currently due to run out on 28 January.

As daily UK Covid case figures exceeded 200,000 for the first time with the spread of the Omicron variant, the PM said people who believed the pandemic to be over were "profoundly wrong".

The daily cases include a backlog of two days of cases from Wales and four days in Northern Ireland.

He said this was a moment for caution but also that the UK's position was different from other waves, as Omicron is milder than previous variants and booster vaccines have been rolled out.

Mr Johnson said the country had a chance to "ride out this Omicron wave without shutting down our country once again".

"We can keep our schools and our businesses open and we can find a way to live with this virus," he said.

Mr Johnson acknowledged the weeks ahead would be "challenging" with "some services disrupted by staff absences". But he promised to "fortify" the NHS to withstand pressure.

The assurances come as many industries are facing staffing problems over the number of workers self isolating with Covid or as contacts of cases, while many people have struggled to get tests over Christmas amid supply and demand issues. 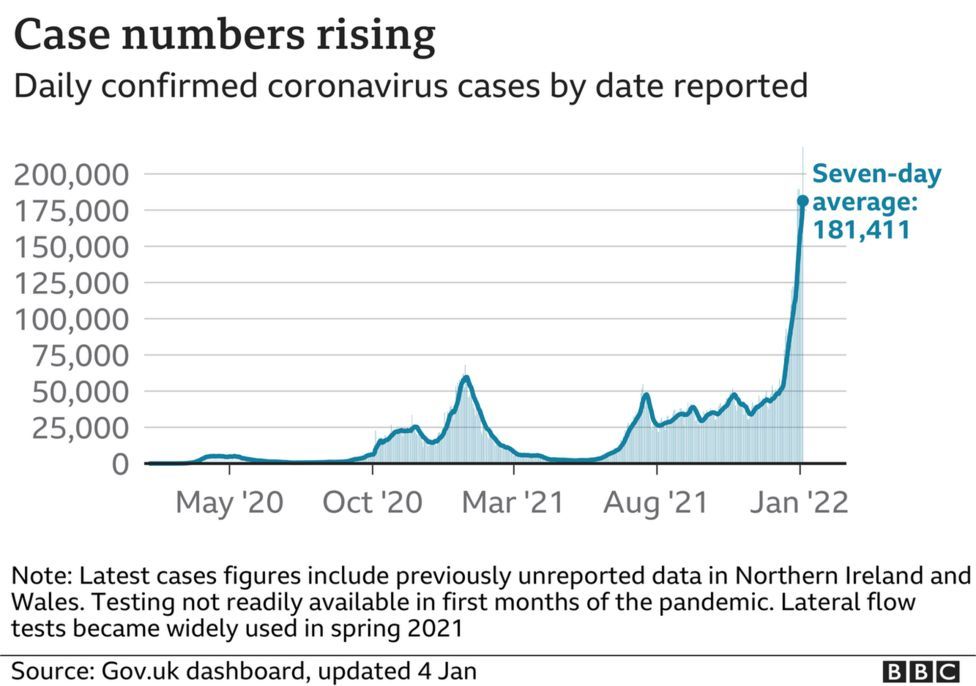 The government would continue to watch what happens in Covid data, but Mr Johnson said the Plan B restrictions in England were the correct and balanced approach.

"It has to balance the effect on people's lives and livelihoods of lockdowns, which are painful, which take away people's life chances and which do a great deal of social damage, damage to people's mental health as well as damage to the economy," Mr Johnson said.

He said the health service was moving on to a "war footing" with plans to set up coronavirus surge hubs at hospitals across England in preparation for a potential wave of admissions.

Mr Johnson added the government was working to identify NHS trusts "most likely to need actual military support, so this can be prepared now".

If modelling done by Warwick University for the government is anything to go by, it may be more a case of having to ride it out rather than being able to.

That's because the window to have a significant impact on the peak with extra restrictions could have already passed.

Instead, what matters now is to what extent the virus spreads in older, more vulnerable groups who are most are risk of getting seriously ill.

To date, most Omicron infections have been in younger age groups.

But there are signs that older age groups are seeing more infections now.

The hope is the boosters will do enough to limit that.

It will be another week or two at least before we can be sure.

Speaking alongside the PM, England's chief medical officer Prof Sir Chris Whitty said lateral flow tests provided a "very good guide, actually, to whether someone is at that moment infectious".

Asked about the possibility of shortening the self-isolation period for Covid cases, he said the current system, where people are released if they test negative on day six and seven of their 10-day isolation, was the correct one.

Prof Whitty expected the infection number would rise, but mortality rates from Omicron would be lower than other waves, while booster jabs provided "very significant protection from hospitalisation".

Pressure on intensive care units was less than in previous waves, he said, but there was a lot of pressure on A&E and other hospital services.

Mr Johnson said it was "absolutely heart-breaking" that up to 90% of people in intensive care with Covid had not had a booster jab and more than 60% have not had any vaccine at all, describing many of them as "dying needlessly". 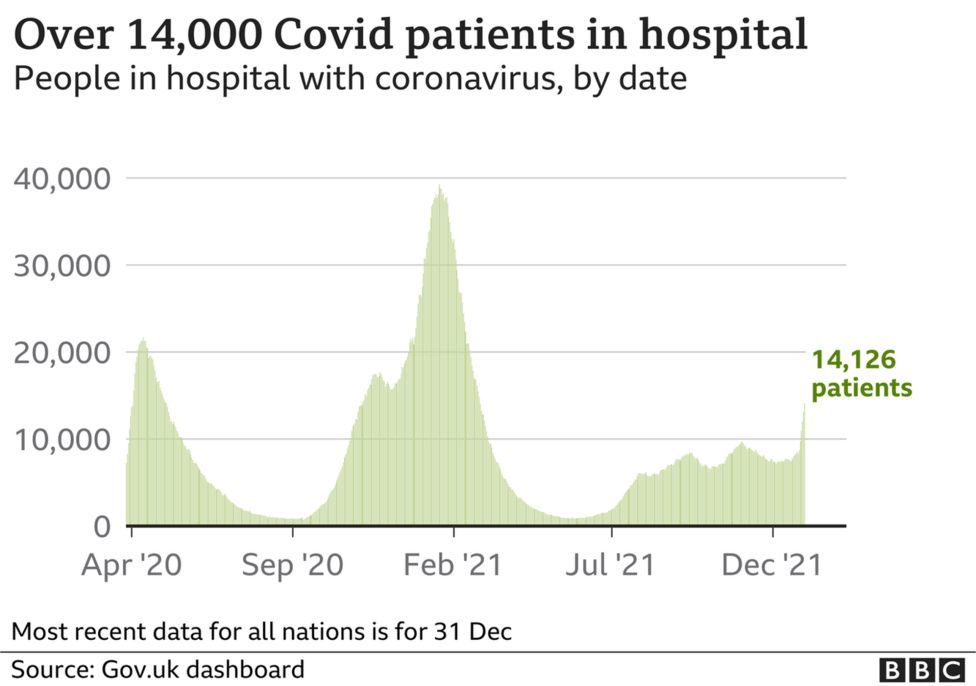 Responding to the prime minister's press conference this evening, Labour's Wes Streeting called on him to go "a lot further" to make sure tests are available for people who need them.

The shadow health secretary said: "The fact we've got doctors, nurses, school pupils struggling to get access to tests this week is entirely down to the government being asleep at the wheel over Christmas.

"The government needs to get a grip so we can avoid the need for further restrictions."