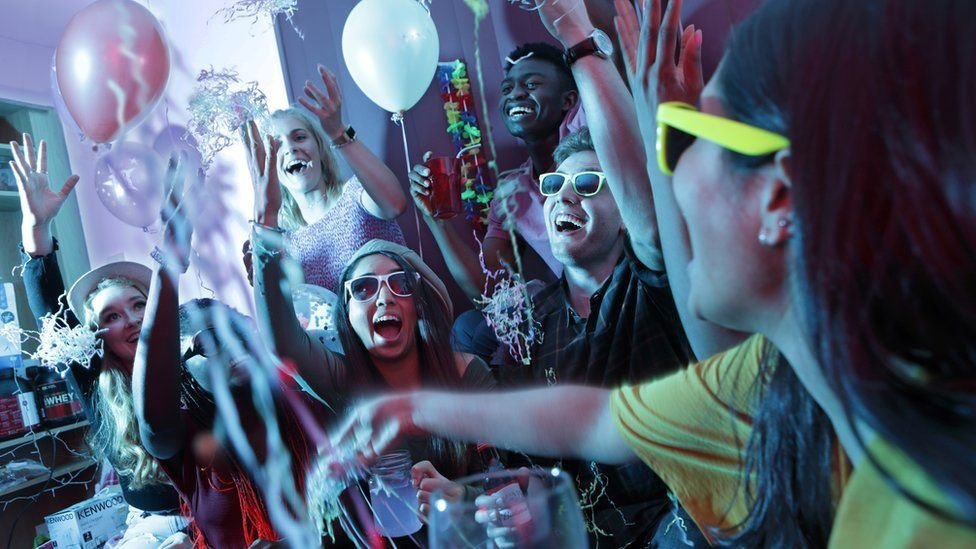 These will double for each repeat offence to a maximum of £6,400.

At a No 10 news conference, Home Secretary Priti Patel said there remained a "small minority that refuse to do the right thing".

"To them my message is clear. If you don't follow rules then the police will enforce them," she said.

Currently in England the fine for those attending illegal indoor gatherings stands at £200 - or £100 if paid early.

Fines of up to £10,000 for holding large illegal gatherings of more than 30 people will still only apply to the organisers.

Police will continue to follow the strategy of engaging with the public, explaining the rules and encouraging compliance, but the Home Office has warned that in severe breaches of lockdown rules, offenders should expect to receive a fine.

Ms Patel said the government would "not stand by while a small number of individuals put others at risk".

She was joined at the briefing by NHS England regional medical director for London Dr Vin Diwakar, who compared breaking the rules to turning on a light in the middle of a blackout during the Blitz.

"It doesn't just put you at risk in your house, it puts your whole street and the whole of your community at risk," he said.

He added: "I hope that the likelihood of an increased fine acts as a disincentive for those people who are thinking of attending or organising such events."

Official figures will be released next week showing how many fines have been given out since the start of this latest national lockdown, Mr Hewitt said.

However, he stressed that "forces are telling us there has been a significant increase" in recent weeks.

"That's reflecting the fact that we've had more officers out on dedicated patrols taking targeted action against those small few who are letting everybody down," he said.

According to Mr Hewitt, three police officers were injured in Brick Lane, east London, last week, after more than 40 people were found cramped indoors at a house party.

Meanwhile, more than 150 people were found at a party in Hertfordshire, complete with music equipment including mixing decks and amplifiers, and another officer was injured.

He said forces in England had issued 250 fixed penalty notices (FPNs) to people organising large gatherings between late August, when regulations were introduced, and 17 January.

In some other recent examples of lockdown breaches:

*  London's Metropolitan Police issued more than 140 FPNs totalling £39,000 in just two days last weekend - including a house party of more than 40 people in Tower Hamlets and a large party at a place of worship in Hackney

*  South Yorkshire Police last week handed out 127 FPNs, of which 92 were for indoor gatherings

*  At the weekend, 15 people were fined at a house party at a holiday rental in Sheffield

*  And in Greater Manchester, police responded to three separate parties over the weekend, the largest one involving more than 40 people at a flat in Cheetham Hill

The latest fines announcement comes after figures showed that assaults on emergency workers made up more than a quarter of Covid-related crimes prosecuted in the first six months of the pandemic.

The Crown Prosecution Service (CPS) said there were 1,688 such offences between 1 April and 30 September in England and Wales.

They were among almost 6,500 crimes related to coronavirus in that period.

Some 1,137 charges were brought for breaking coronavirus laws, according to the figures published by the CPS - which cover completed prosecutions.

On Thursday, it was reported that another 1,290 people had died within 28 days of testing positive for Covid-19 in the UK, bringing the total to 94,580.

And a further 37,892 lab-confirmed cases of coronavirus were announced, bringing the total number of cases in the UK to 3,543,646.