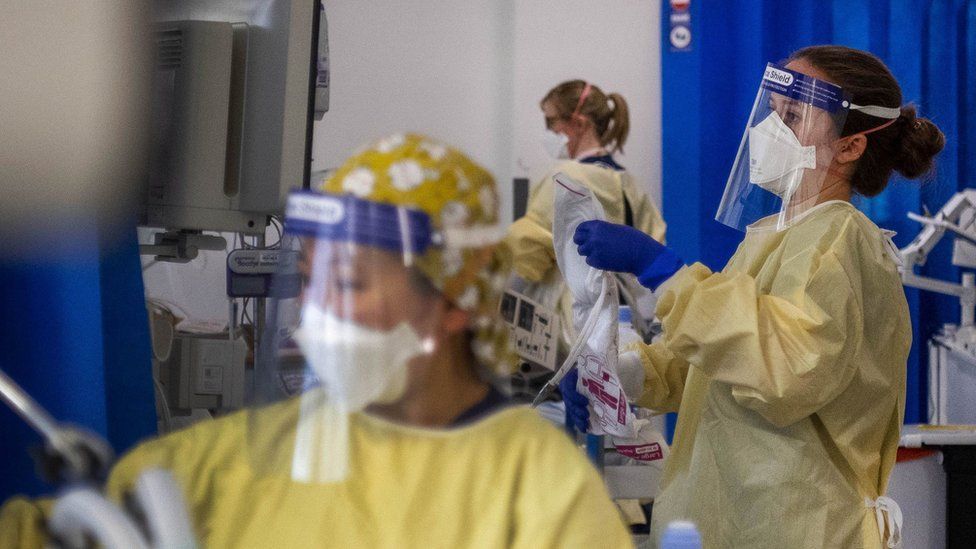 Covid-19: NI has the highest infection rate in the UK

The past month has seen a considerable rise in coronavirus cases in Northern Ireland.

Hospitalisations have increased. As have deaths.

But the data also indicates that the vaccine has been doing its job - things are nowhere near as bad as the last surge at the start of the year.

Northern Ireland has the highest infection rate in the UK. And by quite some margin. 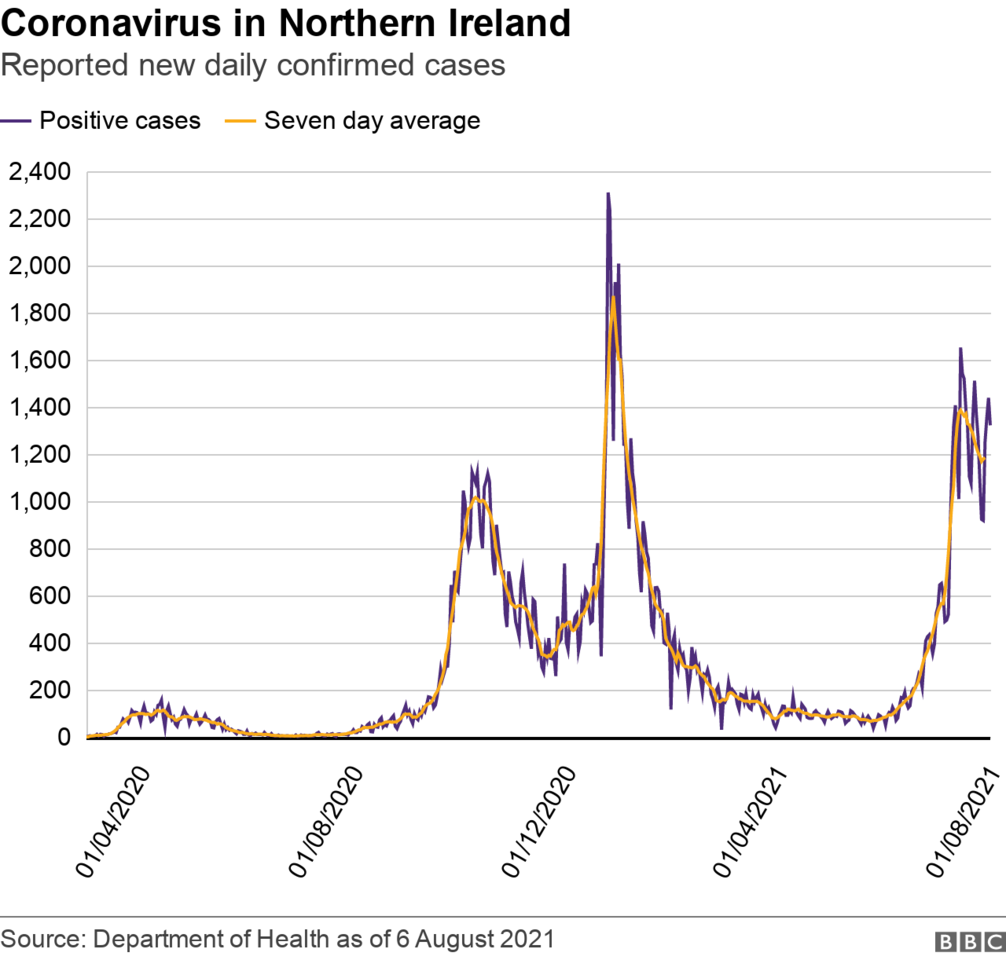 The latest data from the UK government, for the seven days up until 1 August, puts Northern Ireland's infection rate (per 100,000 population) at more than three times that of Wales and Scotland:

The Republic of Ireland's government doesn't publish a seven-day infection rate, but it can be worked out. For the same period, it was 185.2 - much lower than Northern Ireland's.

There are indications that the Republic's rate is on the rise. However, it's worth noting that during the latter half of July, Ireland was seeing similar numbers of daily cases as Northern Ireland - despite having two and half times the population.

There was a slight decrease in Northern Ireland's case numbers at the beginning of the week and the latest infection rates from the Department of Health (DoH) indicate a fall in comparison to the previous seven days.

But the department's dashboard also records that case numbers started to rise again at the end of the week.

In any case, the numbers are fairly clear - right now, coronavirus is spreading in Northern Ireland more quickly than in Britain and the Republic. 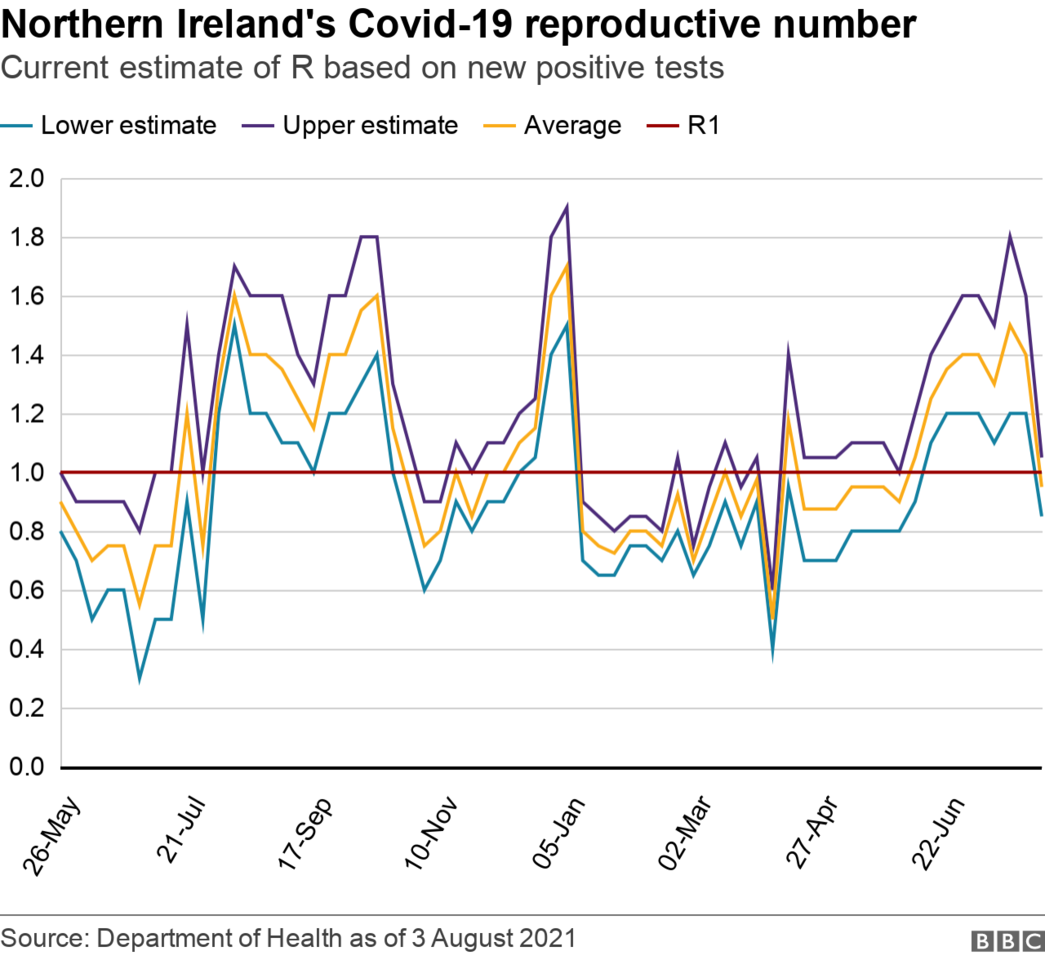 The big question is, why? That's difficult to answer by looking at infection rates alone.

So let's look closer at who is getting infected.

Younger adults seem to be driving the higher rate of infection.

Data from the DoH shows that over the past week, almost 70% (68.7%) of all positive tests for Covid-19 were among people younger than 40.

And this isn't overly surprising - for a few reasons.

Younger adults will naturally make up a large part of the workforce who are on the move and mixing with other people.

Socialising will also be affecting this increased rate.

And perhaps, the most important factor - a lower rate of vaccination among those aged 18-39.

We'll look at vaccination rates in more depth below, but - in short - the figures show that young adults in Northern Ireland are less likely to have had a vaccine dose than older people.

Of course, vaccination does not stop transmission of coronavirus, but a number of studies have indicated that it reduces that risk.

Vaccinations opening to 16 and 17 year olds might have an effect - but it'll take a few weeks before the figures give any hint of this.

For now, Northern Ireland has roughly the same seven-day rolling average for new cases as we saw around seven months ago.

That was around the peak of the winter surge in January, when more than 1,000 hospital inpatients were Covid-positive, and about 20 people with the virus were dying every day.

Things are nowhere near as bad at that now.

That's looking at our current caseload in a positive light.

Another - equally accurate - way of looking at the data is that we have many more people in hospital than we did just a month ago, and our death rate hasn't been as high for five months.

The vast majority of adults in Northern Ireland have had at least one dose of vaccine. 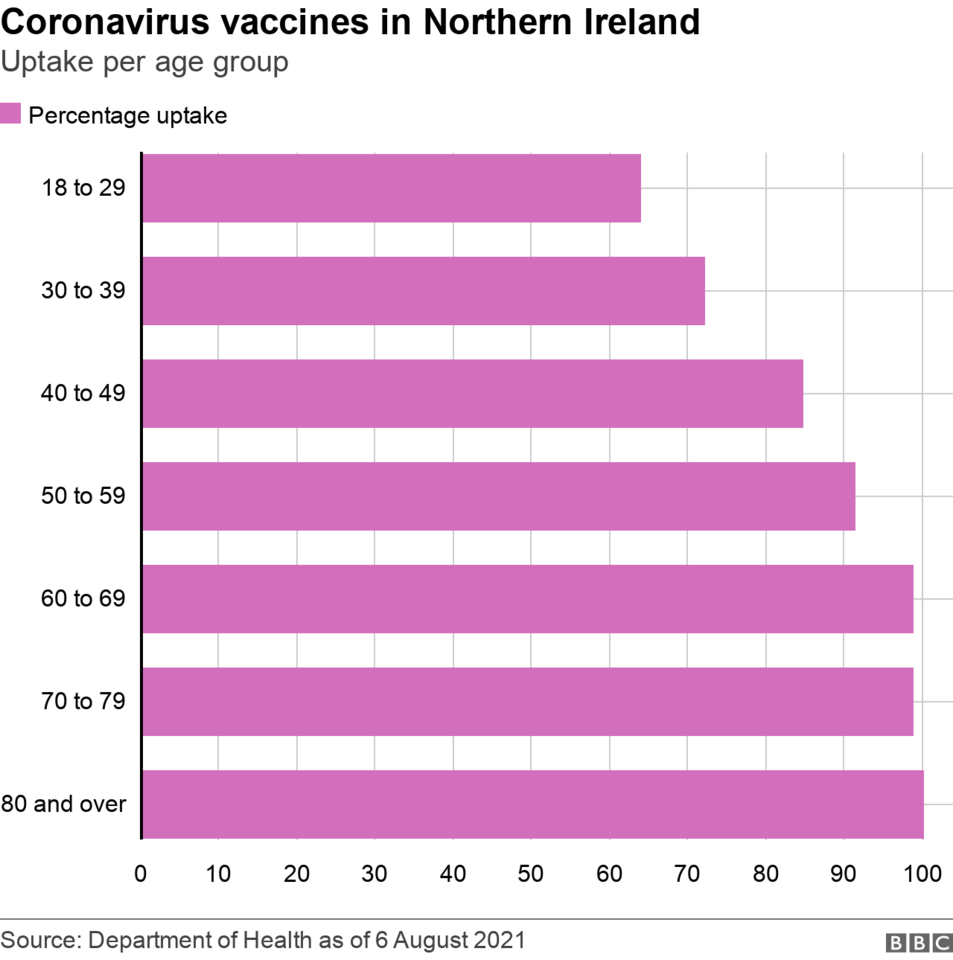 The DoH's latest figures show that 84.2% of adults in Northern Ireland have had a jab.

The effort to roll out the vaccination programme has been impressive.

That said, Northern Ireland has the lowest rate of first dose vaccination in the UK. 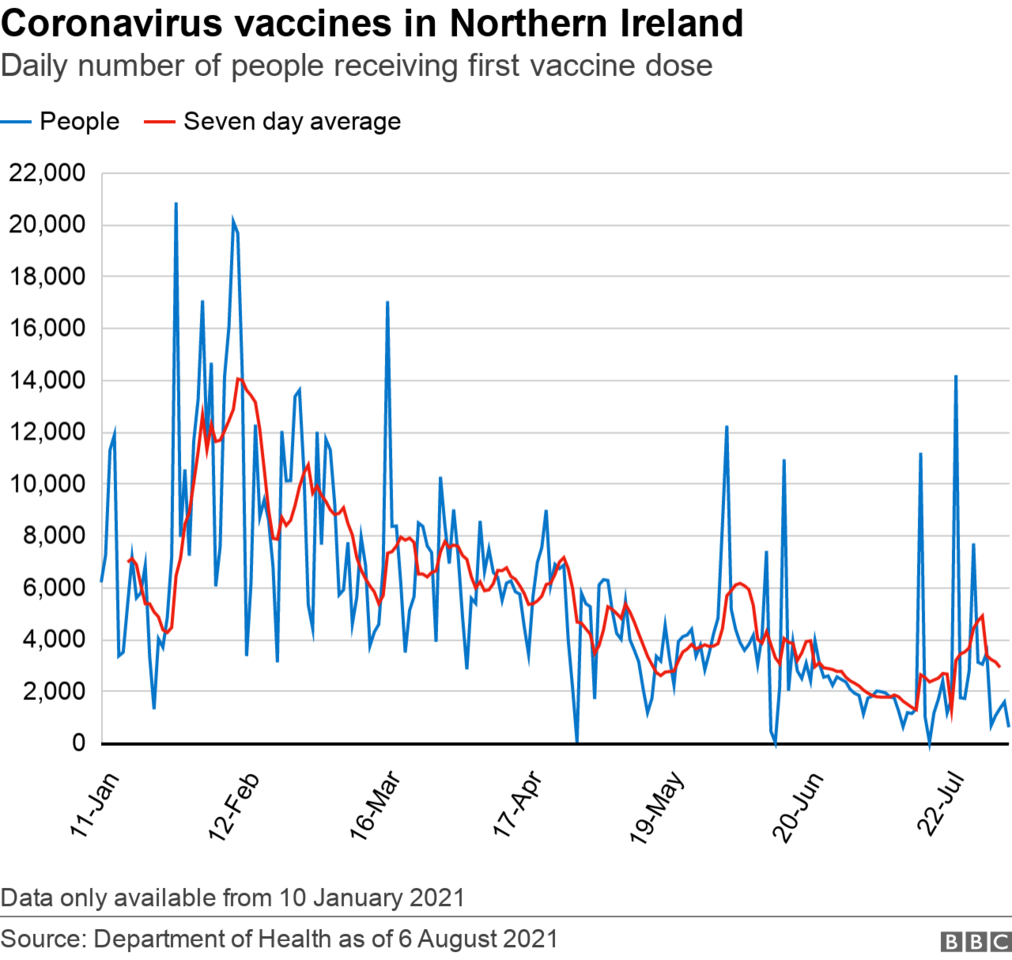 A gap between Northern Ireland and the rest of the UK started to open in late June and then widened.

It's been closed slightly over the past week or two.

Northern Ireland has also fallen behind the Republic of Ireland in terms of vaccinations.

This indicates an impressive recent performance by the Republic, given that its vaccination programme began later - and more slowly - than the UK's.

By last weekend, the Republic had vaccinated about 87% of its adult population. 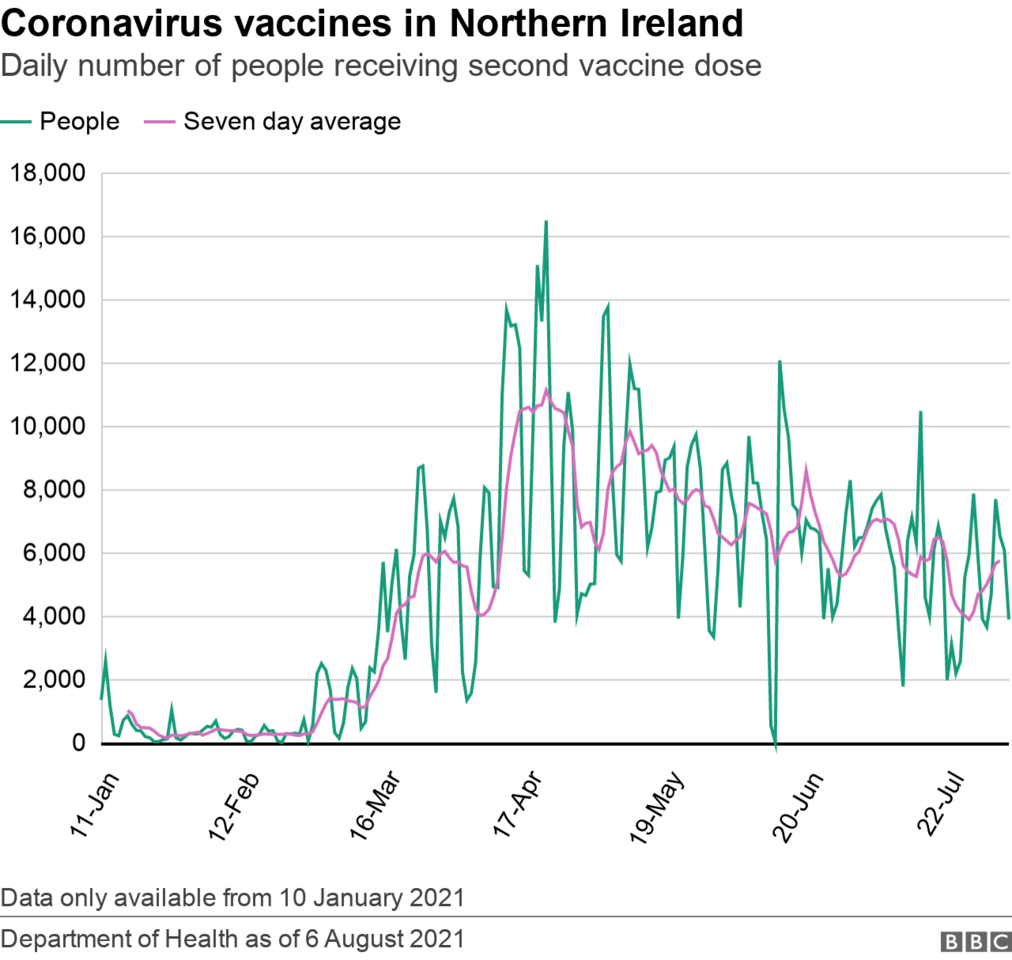 When it comes to second doses, Northern Ireland is at a very similar level to England and Scotland (around 73-74% of the adult population).

The latest development in the vaccination story is, of course, the opening of vaccinations to 16 and 17 year olds in Northern Ireland.

The Republic opened up its vaccination programme to these ages at the end of July.

It's also expected that registration will open on 12 August for 12-15 year olds in Ireland to get a jab. 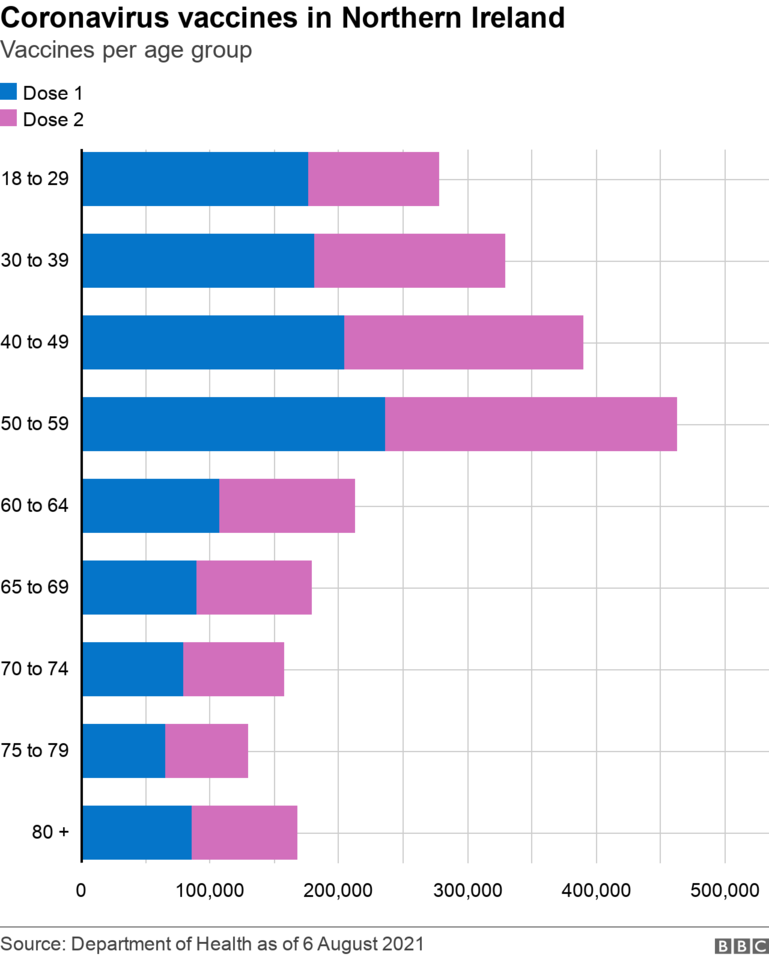 Younger adults in Northern Ireland have the lowest uptake rate for vaccinations of any age group.

By comparison, all age groups above 50 are at least 90% vaccinated, and vaccination rates are particularly high in those over 60 (around 99.8%).

In comparison to Northern Ireland, uptake rates for young adults are higher in Scotland and Wales, but roughly similar in England.

At midnight on 5 August, there were 226 people in Northern Ireland's hospitals with Covid-19. 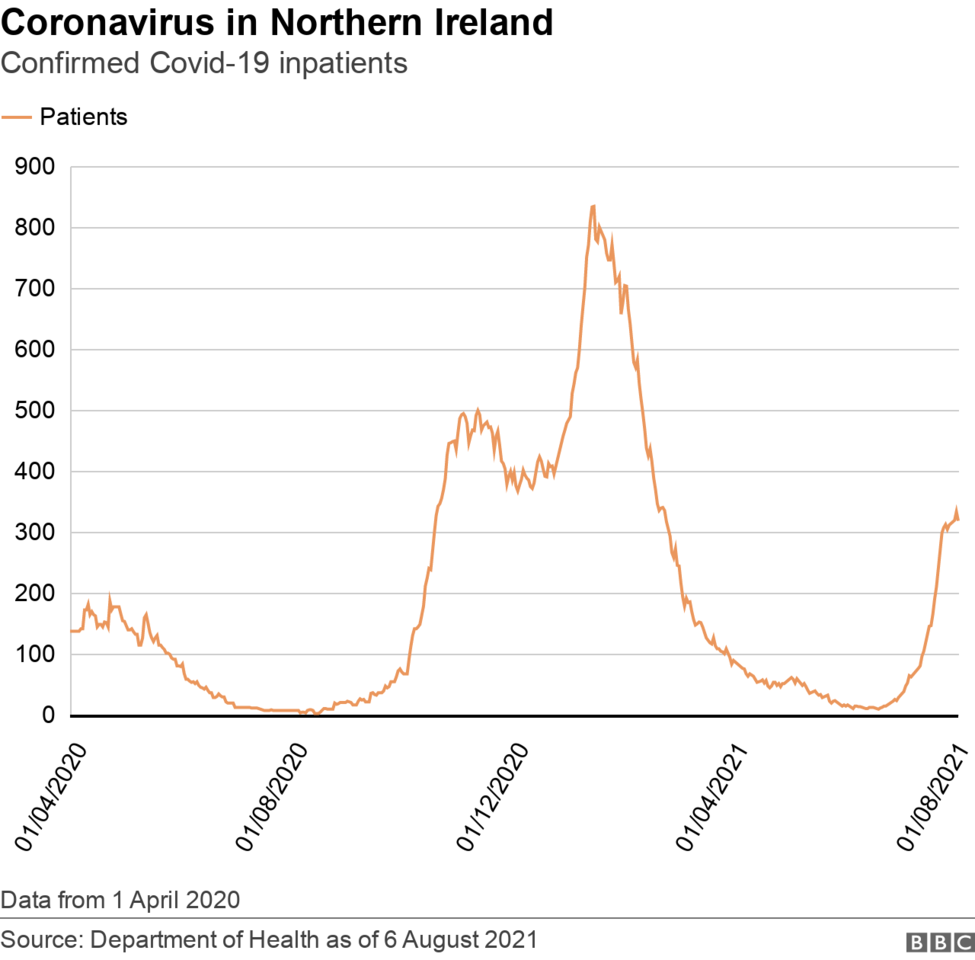 This represents a drop since the end of July, but it's still quite an increase in the space of a few weeks - there were 66 Covid-positive inpatients a month previous.

But it's also worth remembering that at one point, we had more than a thousand people in hospital with the virus.

Figures released by the Belfast Trust show that 12 pregnant women were treated in hospital in the week up to 5 August.

The age profile of Covid-positive inpatients has also changed in comparison to what we saw in January.

It's true that the majority of people in hospital with Covid-19 in Northern Ireland are over the age of 70.

But consider the proportion of Covid inpatients being treated between the ages of 20 and 39.

On 25 January, there were also 29 people in hospital with Covid in that age bracket - but that made up just 3% of inpatients.

In short, younger adults are now making up a greater proportion of inpatients with Covid.

Undoubtedly, the lower rate of vaccination among young adults in Northern Ireland goes some way to explaining this.

Mirroring the rise in Covid-positive inpatients, is the increase in ICU patients who have the virus - currently 37. 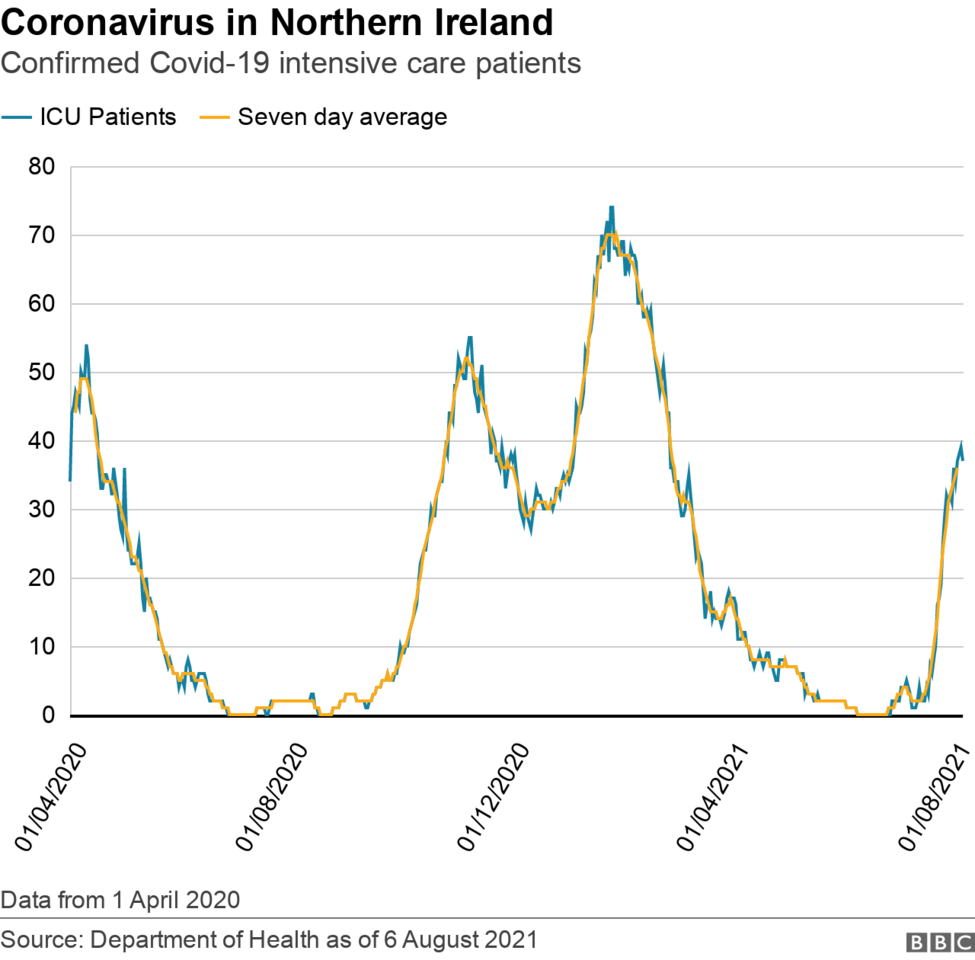 On a positive note, the rate of Covid admissions to hospital has been falling - albeit slowly - since the end of July.

In theory, this should mean a further drop in the number of people in hospital with the disease. 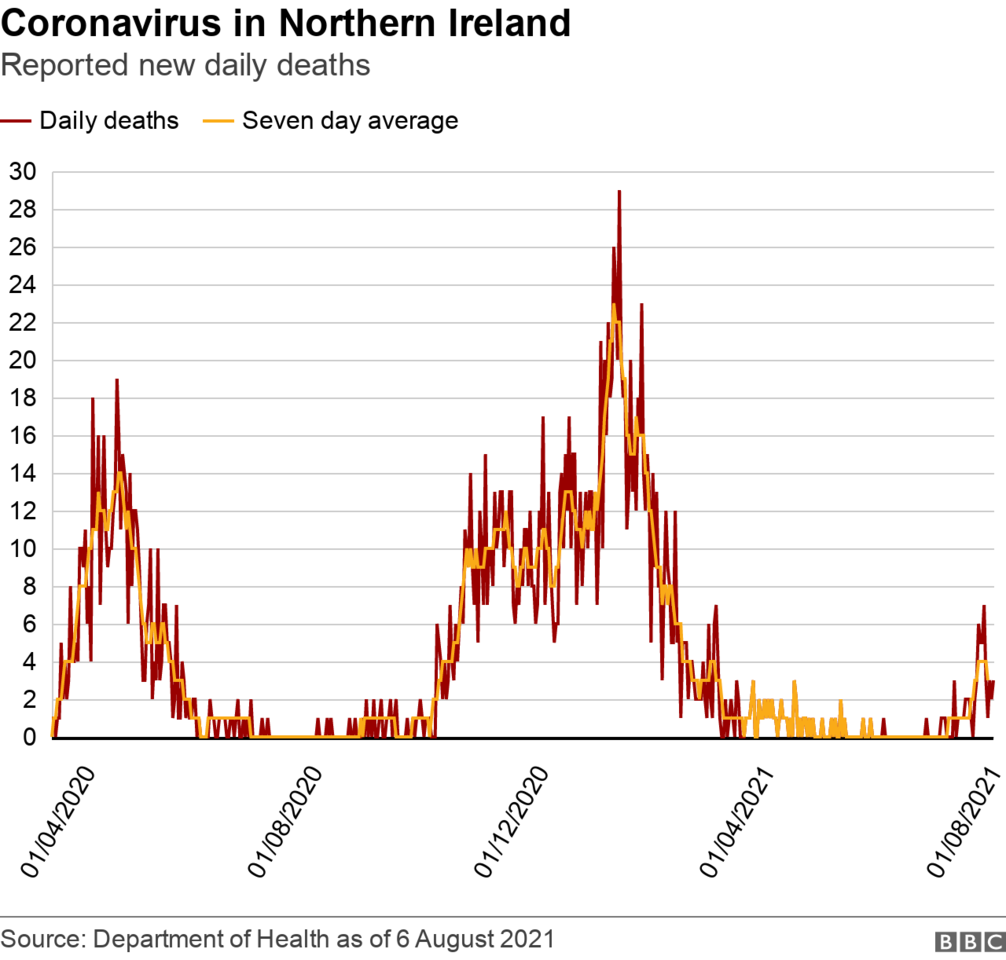 Over that period, the DoH has recorded 43 deaths. 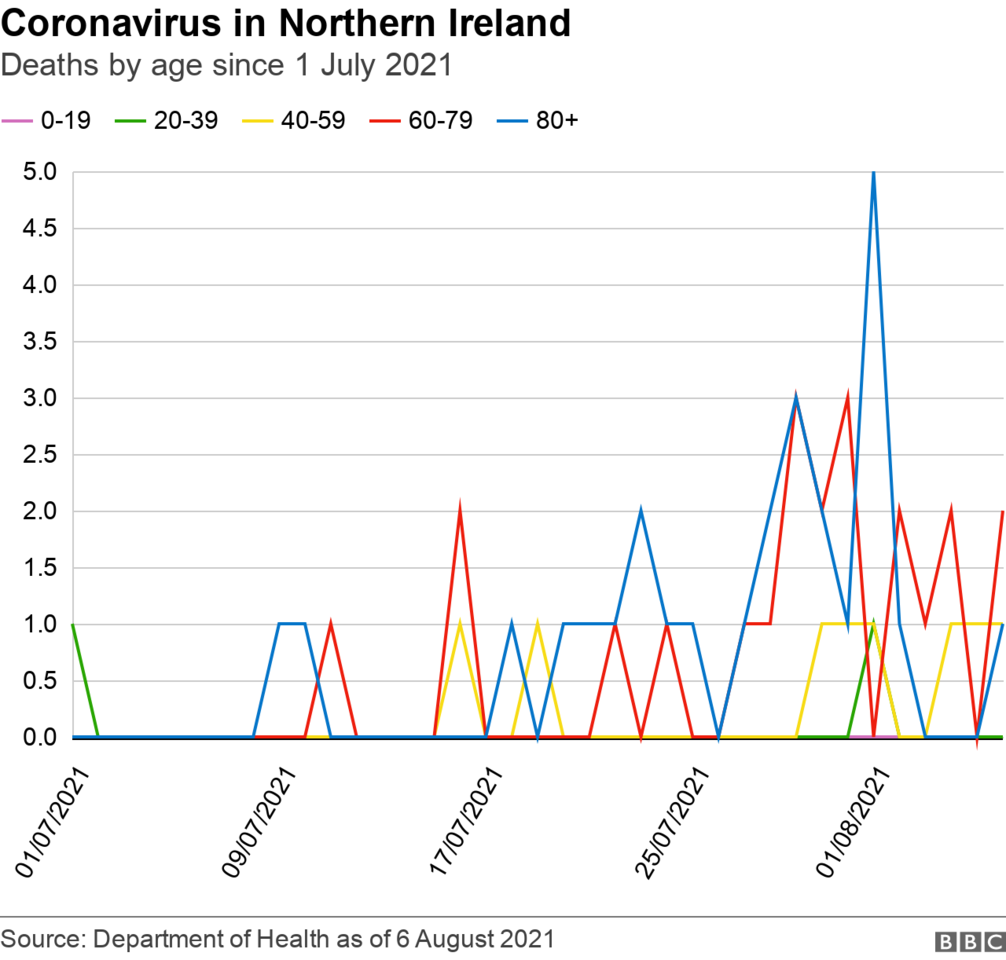 The latest seven-day rolling average for deaths is three.

That's a far cry from mid-January when it was 23.

But it's also worth noting that the DoH recorded a rolling average of zero between 17 May and 12 July.

This differs from the DoH's figure of 2,213 because the department counts deaths within 28 days of a positive test for the virus, while Nisra counts the death certificates where Covid is mentioned.