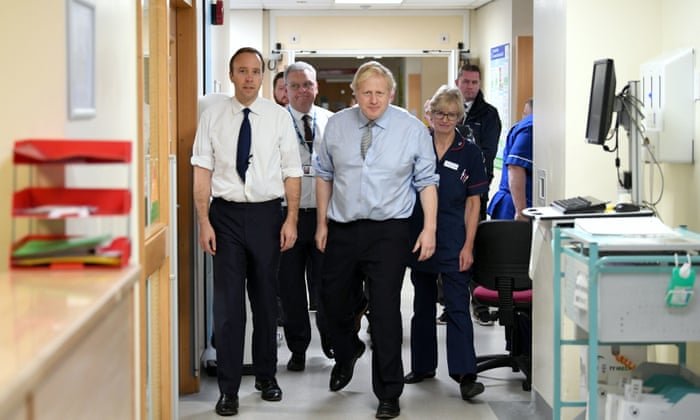 Health professionals back King’s Fund thinktank after ‘perverse’ rise in fee
The government should stop charging overseas doctors and nurses hefty fees to use the NHS in order to help tackle the service’s deepening staffing crisis, Britain’s leading health thinktank has urged.

The King’s Fund warns that the charges – which are about to go up from £400 to £625 a year for foreign workers and their dependants – are a “perverse” deterrent to the very staff the government admits it needs to attract to plug holes in the NHS workforce. The rise means a health professional from abroad with a partner and two children will have to pay £2,500 a year.

Boris Johnson has come under fire for deciding to increase the immigration health surcharge for migrants from outside the European Economic Area and to extend it to EU staff for the first time after Brexit, despite acknowledging that the NHS will need to recruit even more personnel from around the world if he is to deliver his key election pledges of 50,000 more nurses and 6,000 extra GPs by 2024.

Richard Murray, the chief executive of the King’s Fund, fears the move may exacerbate staff shortages that are causing widespread problems for the overstretched NHS. The charge should also be lifted for people coming to work in social care, he said.

“Treating hard-working healthcare staff as a burden on the very services they provide is perverse. It sends out the wrong message and could discourage recruitment at a time when we should be warmly welcoming every healthcare professional who wants to work here,” Murray said. “Removing the surcharge for health and social care staff would support the government’s own targets for the health services and support struggling social care.”

The NHS in England is already struggling with about 100,000 vacancies, according to the most recent official figures. In a vivid illustration of the problem, the Royal Stoke hospital admitted last week it had not been able to open 102 extra beds as planned on 1 December to help it cope with the winter surge in demand because it did not have enough staff.

Foreign health workers coming to the UK for at least six months, but not permanently, are required to pay the surcharge upfront for themselves and each family member on top of the £464 cost of a visa. It “represents the most cost-effective and fair means of ensuring temporary migrants make a financial contribution to the operation of the service”, the government says.

The fees raised about £200m a year when they were introduced in 2015, though initially costing £200 a head. Doubling that to £400 last December was due to bring in a further £220m a year, the Home Office said. Ministers argue that raising it again to £625 next year is justified as it costs the NHS on average £470 a year to treat a surcharge payer who needs care.

Critics say it is unfair and wrong to charge overseas-born health professionals for using a service which they help to fund by paying income tax and national insurance.

“While the new government says it wants to make it easier for international staff to come to work in the health service, they are doing the exact opposite by charging them to use the very service they are contributing their skills to,” said Chaand Nagpaul, who chairs the British Medical Association, which represents doctors.

The rise to £625 “is sending the completely wrong message to talented staff from around the world, who the NHS vitally depends on, and who could as a result be dissuaded from coming here,” he added.

Dame Donna Kinnair, chief executive of the Royal College of Nursing, said: “It cannot be acceptable that nurses that come from overseas to work in the NHS face these charges whether they access NHS services or not. This charge goes against efforts to hire professionals. A new nurse from overseas with two children would have to work for 116 hours just to pay off the charge – hardly an incentive for coming to work in our NHS.”

The government welcomed the “vital contributions which doctors, nurses and other health or care professionals make to the NHS”, a spokesperson said. “We are delivering on the people’s priorities by increasing the immigration health surcharge for those coming to live in the UK and will be setting out detailed plans shortly. The vast majority of income collected by the Immigration Health Surcharge goes back into frontline services across the UK.”
Add Comment