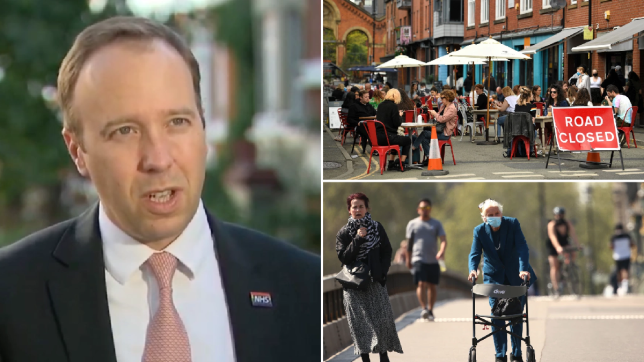 The jump is the largest daily increase in Covid-19 cases since mid-May, and follows on from 1,813 new infections being reported on Saturday. It comes as the number of new hospital admissions remains low, while only two deaths were recorded in the 24 hours previous.

Speaking to Sky News today, the Health Secretary said: ‘The rise in the number of cases that we have seen today is concerning. The cases are predominantly among younger people, but we’ve seen in other countries across the world and in Europe, this sort of rise in cases among younger people leads to a rise across the population as a whole.

Hancock went on to insist that people should keep sending their children to school and continue returning to their offices despite the rise in cases.

He said he understood why ‘people are concerned’ but said both schools and workplaces across the UK were ‘covid secure’.

The Health Secretary warned that younger people should be protecting the elderly
Nearly 3,000 new cases of the virus were reported today

The daily increase in coronavirus cases began topping 1,000 during August and has since been steadily increasing, with 1,940 cases on Friday, 1,735 on Thursday and 1,508 on Wednesday. Altogether, the UK has seen 347,152 people test positive for the virus.

The rising number of cases could be down to the continued easing of lockdown restrictions, although government data also shows that significantly more people have undergone coronavirus tests in the last three months than at the start of the pandemic.

Labour’s shadow health secretary Jonathan Ashworth said the spike in cases was ‘deeply concerning’, as he urged Hancock to address the issue in the Commons.

He said: ‘This increase, combined with the ongoing testing fiasco where ill people are told to drive for miles for tests, and the poor performance of the contact tracing system, needs an explanation from ministers.

Lockdown restrictions have continued easing across most of the UK

‘Matt Hancock must come to the House of Commons to set out what is being done to get testing back on track and bring case numbers down.’

Scotland’s first minister Nicola Sturgeon also noted her concern at the figures and tweeted that they must ‘remind us again of the need to be very vigilant’.