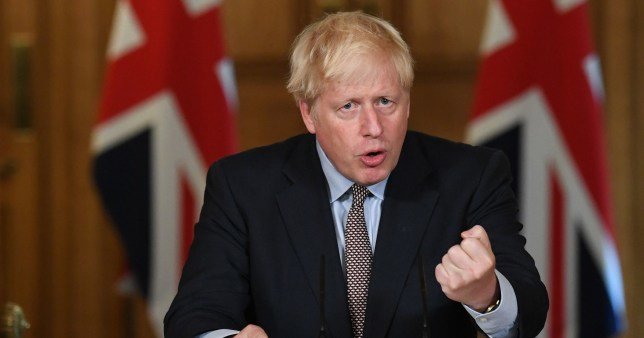 Boris Johnson is to chair his first emergency Cobra meeting in four months in another sign that new lockdown-style measures are on the way.

The meeting, which will take place tomorrow, comes after the PM faced significant pressure from opposition leaders to consult them on plans to tackle the second wave of coronavirus hitting the UK.

The significance of a Cobra (which stands for Cabinet Office Briefing Room A) meeting is that it is usually called ahead of significant decisions being taken.

Mr Johnson will phone the first ministers of Scotland, Wales and Northern Ireland and brief Cabinet on his latest thinking ahead of the meeting, which will be followed by a press conference.

However, the PM’s spokesman was unable to say whether Mayor of London Sadiq Khan, who has called for lockdown to be imposed on the capital city next week, would be invited to the crunch talks.

The PM’s spokesman said: ‘We do face significant challenges as we enter the winter months.

‘You can see what’s been happening over the course of the previous 72 or 96 hours.

‘The PM spoke on Friday about his concerns about a second wave. There was an update to the Cabinet on Saturday, the PM held more meetings with scientific advisers and with colleagues yesterday.

‘Today he will be engaging with the devolved administrations, let’s see where we get to.

‘Tomorrow morning is an opportunity for Cobra to discuss what next steps may be required in the coronavirus response.’

It comes after scientists warned the UK could be seeing 50,000 new cases of coronavirus a day by mid-October if efforts aren’t taken to control the disease.

The government’s chief scientific adviser Sir Patrick Vallance has said the ‘vast majority of the population remain susceptible’ to catching coronavirus and that ‘speed’ and ‘action’ were now needed to tackle the crisis.

Appearing alongside him, chief medical officer Chris Whitty said people should ‘break unnecessary links’ between households to stop coronavirus spreading out of control.

It is unclear what new measures could be introduced in the coming days and weeks, but reports suggest the PM is considering a two week ‘circuit breaker’ national lockdown, a curfew on pubs and a ban on households mixing.

It is also being reported that the government is planning an ‘enforcement blitzkrieg’ on businesses ignoring the lockdown restrictions.

Pubs and restaurants could be shut down if they are caught flouting Boris Johnson’s ‘rule of six’, according to The Sun.