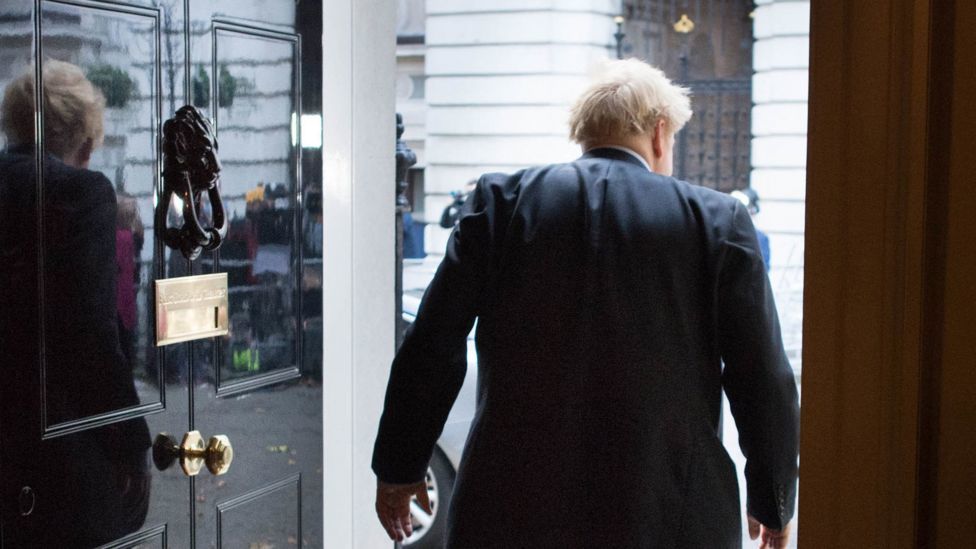 Boris Johnson has resigned as Conservative leader and will step down as prime minister when a new leader is found. But how does that happen?

How long will Boris Johnson stay in power?

In the past, prime ministers choosing to step down have usually stayed in office until a successor is found. That means he would stay in office until the Conservatives choose a new leader, as his predecessors Theresa May and David Cameron did when they resigned.

It's been suggested that process could last until October, although it could be much shorter with the replacement of Theresa May as leader only taking two months.

Former Conservative Prime Minister Sir John Major said it would be "unwise" for Mr Johnson to stay in office for three months.

In his resignation statement Mr Johnson only said: "I've agreed with Sir Graham Brady, the chairman of our backbench MPs, that the process of choosing that new leader should begin now and the timetable will be announced next week."

Could he go any sooner?

Some Conservative MPs have suggested the timetable for the leadership election could be shortened and completed in a few weeks.

Sir John Major said one option was that Mr Johnson could resign as prime minister immediately and that Deputy Prime Minister Dominic Raab could take over temporarily.

He also suggested there could be a significant change to the leadership election process. The timescale for the contest is decided by the executive of the 1922 Committee of backbench MPs, and they could decide to change the rules as well before the contest starts.

Labour leader Sir Keir Starmer says if Mr Johnson is not removed at once, he would call a vote of no confidence.

Under a motion of no confidence, all MPs - not just Conservatives - would get to vote. One more MP voting in favour than voting against would be required for it to pass.

Such an outcome, however, would rely on Conservative MPs voting against their own government - which would be unlikely.

How do the Conservatives elect a new leader?

Once a Conservative leader has stood down, an election for a new party leader is triggered. Under the current rules, candidates need the support of eight Conservative MPs to stand.

Once all the candidates have declared - if there are more than two candidates - Tory MPs will hold a series of votes until only two remain.

*  in the first round, candidates must get 5% of the votes to stay in the running (currently 18 MPs)

*  in the following rounds, the candidate with the least number of votes is eliminated

When two MPs are left, all Conservative Party members around the country - so not just MPs - will vote for the winner. Of course, there's still time to change that process. 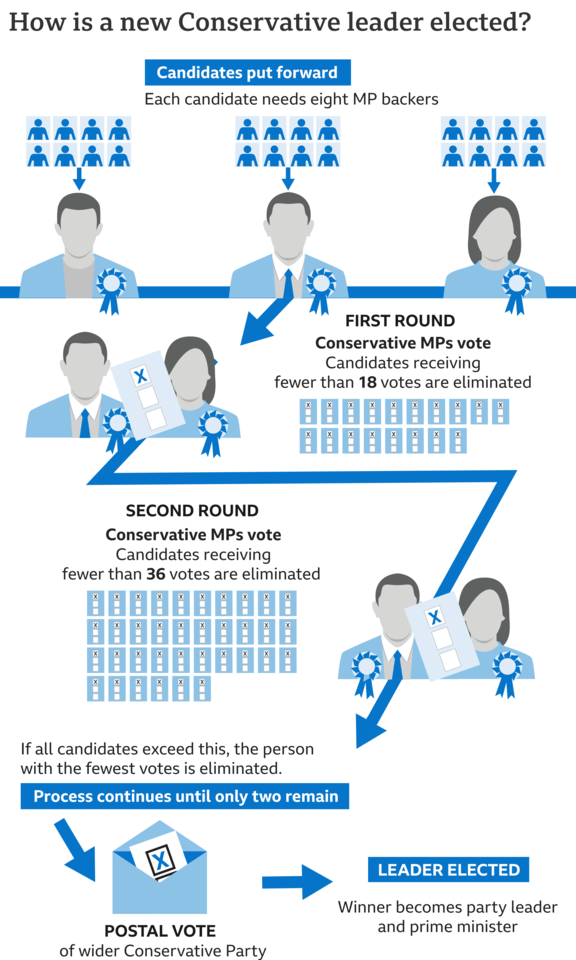 How is the next prime minister appointed?

Whoever wins the contest to lead the Conservatives will become the leader of the party with the largest number of MPs in Parliament.

The Queen will therefore ask them to form a government.

Will there be a general election?

When a prime minister resigns, there is not automatically a general election.

The latest an election can be held is January 2025, but the new prime minister could choose to call an election before then.

Who could replace Boris Johnson as prime minister?

At the moment, there is no obvious successor to Mr Johnson, but there are several potential candidates.

Former Cabinet ministers Jeremy Hunt and Sajid Javid have both previously stood for leadership and may choose to do so again.

Other possible contenders include:

What powers does Boris Johnson still have?

Until he officially gives up the office of prime minister, Mr Johnson still has the same powers, in theory. In reality, he now lacks the authority to introduce any radical new policies.

He will still represent the UK abroad and can continue to make public appointments or changes to his team of ministers.

One of his final acts in office is likely to be awarding knighthoods and appointments to the House of Lords in his resignation honours list.