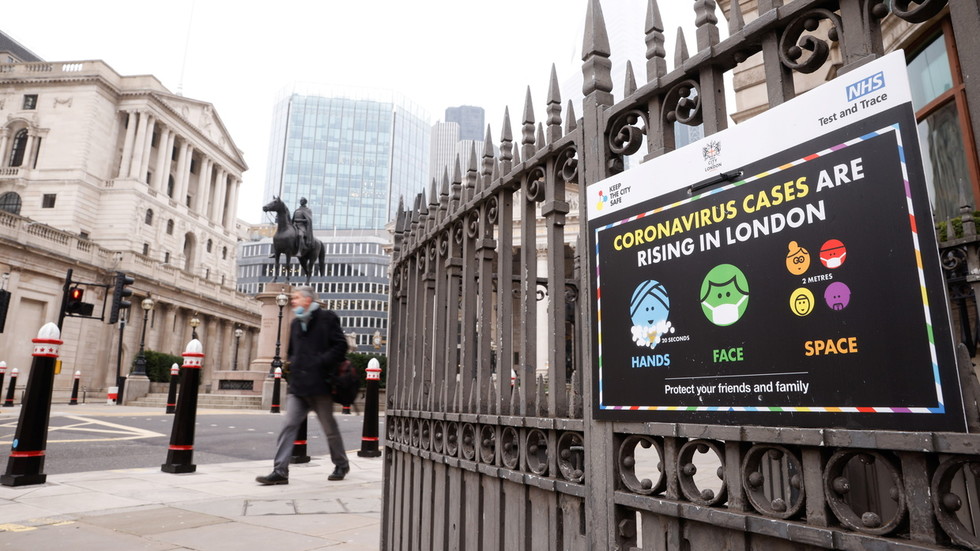 Boris Johnson has been accused of mismanaging the UK’s response to Covid-19, as his government rolls out a new ad campaign encouraging people to adhere to the nation’s third lockdown.

The British prime minister on Saturday implored his countrymen to comply with the measures, claiming that the NHS was under increasing pressure amid a rise in coronavirus cases.

The message mirrored a new television advert initiative launched by his government.

“Once more, we must all stay at home. If it's essential to go out, remember: wash your hands, cover your face indoors and keep your distance from others,” the ad states, adding that staying home will safeguard the NHS and “save lives.”

There is concern that more and more people are ignoring the lockdown, which was announced on Monday and marks the third time that the government has imposed blanket restrictions on movement and other activities throughout the country.

Data collected by transport app Citymapper shows that people in London, Manchester and Birmingham are moving around less than they were in autumn, but are still more mobile than they were during the first lockdown in April.

But Johnson’s appeal seems to have angered nearly all sides of the lockdown debate as he faced ridicule for being too indecisive and ineffective, while also being accused of exaggerating the threat of the virus as he simultaneously wrecked the economy and trampled on basic liberties.

Some lashed out at the British leader for not taking a more uncompromising approach to dealing with the health crisis, claiming that BoJo should have used “rigorous action” in order to stamp out the virus.

Others suggested more stringent amendments to the current rules, arguing that people should be ordered to keep farther apart, since the new strain of the virus is believed to have a higher transmissibility.

There was similar fury from Britons who pointed out that Johnson’s inner circle have repeatedly broken Covid-19 guidelines, and suggested that a third lockdown would not have been necessary if people, including those in government, had simply followed the rules.

But while Boris was accused of not doing enough, he was also hounded for allegedly using fearmongering tactics to defend the new lockdown.

Many took issue with his suggestion that the NHS was facing unprecedented or alarming levels of strain, noting that it’s not at all uncommon for hospitals to fill up during the winter.

In fact, the most recent data, published by the BBC on Friday, shows that when compared to 2019-2020, there is no big difference in the statistics regarding current hospital admissions.

The occupancy rate is “actually noticeably lower than a usual year,” the BBC concluded.

Still, the article noted that NHS England “warns against using direct comparisons,” as patients now require more attention, plus the increased infection control and the movement of staff to intensive areas overloads the process.

Veteran journalist and commentator Peter Hitchens noted in his most recent column for the Mail on Sunday that the government was taking unusually extreme measures to rectify a commonplace problem.

“If you look back into the archives of any newspaper or TV news station, you will discover that the NHS has a ‘winter crisis’ thanks to overloaded intensive care wards, year after year. But nobody ever thought before that this could be solved by strangling the country and forbidding grandparents to hug their grandchildren,” Hitchens wrote.

Others interrogated Johnson about why emergency ‘Nightingale’ hospitals have been shuttered or remain understaffed if there truly is a dangerous shortage of beds due to Covid-19.

There are other indicators to suggest that the British public is becoming increasingly hostile towards the new lockdown measures. A segment on ‘Good Morning Britain’ asking if Britons should receive cash rewards for snitching on their neighbours for violating Covid-19 rules faced considerable backlash, with many comparing the proposition to East Germany’s police state.

The country’s police forces have also faced criticism for heavy-handed enforcement of the lockdown guidelines. On Friday, two women in the UK were fined by police for driving five miles to go for a quiet walk, with officers telling the ladies that the peppermint tea they were carrying counted as an unlawful picnic.