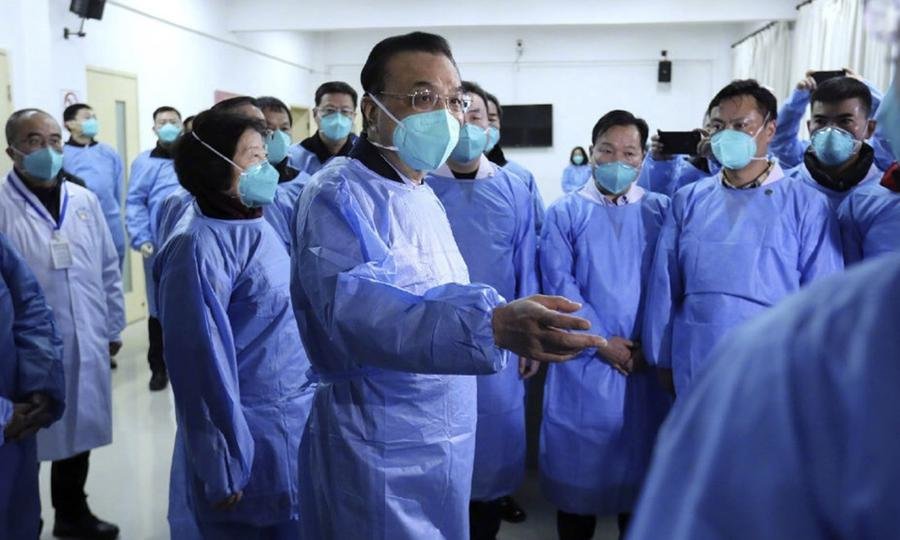 Hong Kong scientist has warned of the nightmare scenario as deadly coronavirus continues to spread
A world-renowned scientist in Hong Kong has warned that the deadly Wuhan coronavirus could infect as many as 150,000 people per day in one of China’s largest metropolitan areas – Chongqing.

Dr. Gabriel Leung, the chair professor of public health medicine at the University of Hong Kong and founding director of the World Health Organization Collaborating Center for Infectious Disease Epidemiology and Control, said the infection rate could soar to that unprecedented level by April or May, which could produce disastrous consequences in the sprawling megapolis of more than 30 million people.

During a press conference on Monday, Leung estimated that as of Saturday, about 25,630 people were likely infected in China, nearly 10 times the official confirmed count of 2,700 cases at the time. Leung added that the number of people infected could be as high as 44,000 if the figure included those whose infection was in the incubation stage.

Leung said the epidemic will continue to grow until it peaks in April and May, hitting other large metropolitan areas such as Beijing, Shanghai, Shenzhen, and Guangzhou.

Hong Kong is not likely to see any easing of the epidemic until June and July, Leung said. The government’s current “containment” strategy against the disease may not work over the long run and stronger measures could be needed, including running large-scale public hygiene campaigns, reducing the flow of people between cities and suspending classes and public activities, he said.

As of 3 pm on Tuesday, the total number of confirmed cases in China was 4,470 and the death toll had reached 107, according to the National Health Commission. More than 30,000 people are under medical observation.

Commenting on the government’s latest decision to forbid those who have lived or stayed in Hubei province in the last 14 days from entering Hong Kong, Leung said it was a good start but stressed that the ban should extend to more mainland cities.

Leung said that some people could lie about where they had been in order to avoid being identified and isolated and that there was little the government could do about it.

Citizen’s Press Conference, a political activist group formed by anti-extradition protesters last year, said in a Monday press briefing that the Hong Kong government should immediately ban all mainlanders from entering the city.

The group said people tended not to tell Hong Kong customs officials if they had been to Hubei and that the government failed to crosscheck. They urged the government to prepare for a scenario in which hundreds of thousands of Hong Kong residents return from the mainland over the next few days infected with the virus.

Sophia Chan Siu-chee, secretary for food and health, admitted that customs officials currently rely on incoming travelers to be honest about where they have been. Chan said the government would consider punishing those who lie.

A train passenger from Guangzhou told NowTV that she was asked to fill in a form at Hong Kong customs asking where she had been over the past two weeks. She said such a declaration was not effective and suggested the Hong Kong government obtain detailed information about all passengers from the China Railway network.

Macau is surpassing Hong Kong in terms of epidemic control. Macau officials successfully identified 144 people from Hubei and sent 140 back to the mainland. The remaining four decided to stay and be quarantined. Macau police will monitor another 500 Hubei people already in the city.

Last Friday, a Wuhan couple who did not show signs of a fever, fled the Prince of Wales Hospital after they were told they would have to pay medical fees of HK$5,100 (US$656) per day as they were not residents. They were escorted back to the hospital by police.

The couple came to Hong Kong to visit their daughter at Lake Silver in Man On Shan. After they were identified as infected, their daughter developed a fever and was sent to the Prince of Wales Hospital for isolation, while her Filipino domestic worker was sent to the Lady MacLehose Holiday Village for quarantine.

The domestic worker did not show any signs of infection, the Philippine Consulate General in Hong Kong announced.

Chung Kin-lai, director (quality and safety) of the Hospital Authority, said on Monday that all patients with suspected and confirmed cases of the virus would not have to pay for medical expenses in public hospitals. Chung said the new measure would help stop the virus from spreading.

Local medical staff were upset by the decision saying it could attract a large number of non-local patients seeking free medical attention in Hong Kong and significantly increase their workload.

As of noon on Monday, the Centre for Health Protection had received reports of 451 infection cases, including eight confirmed cases and 276 cases that were not novel coronavirus. The remaining 167 patients were hospitalized for further investigation.
Add Comment