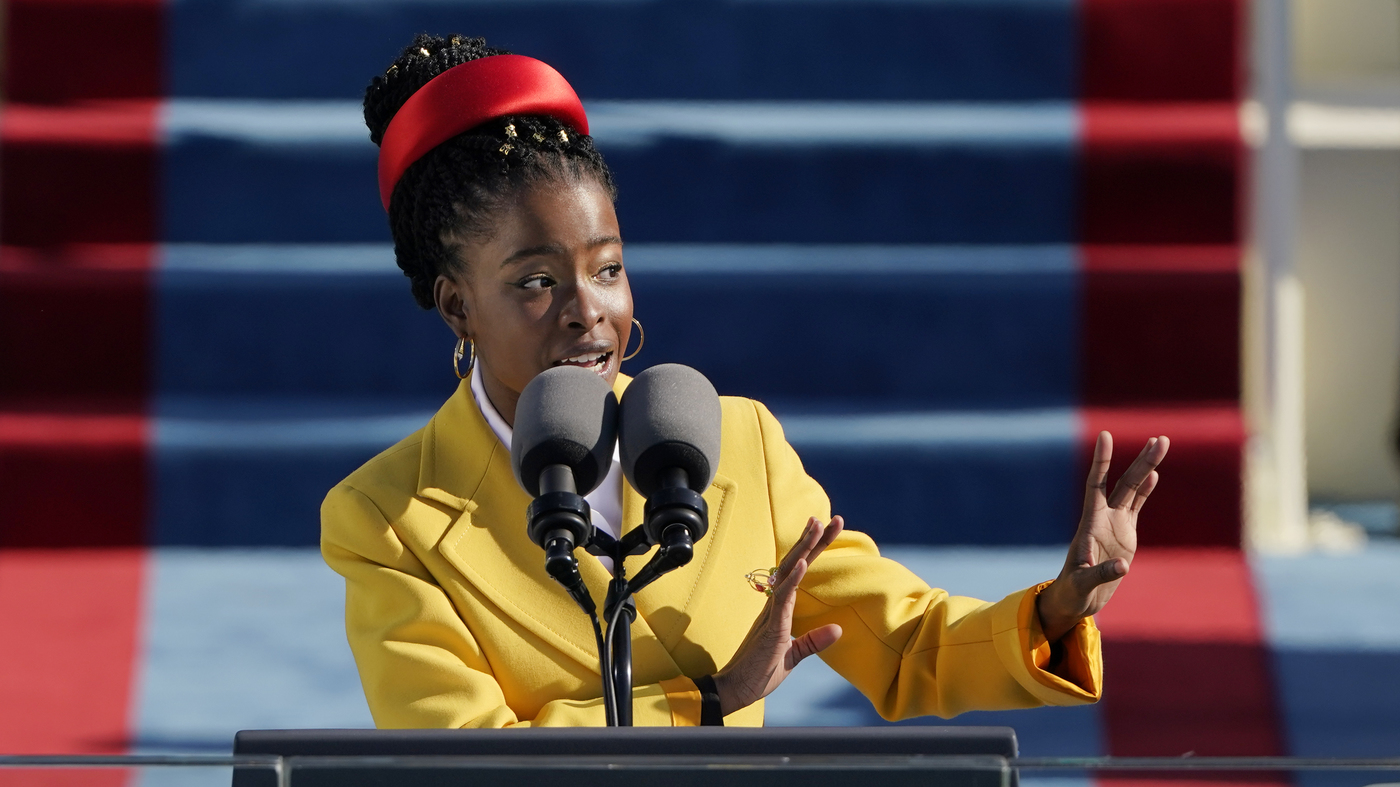 Amanda Gorman - And Poetry - Will Be Part Of Super Bowl LV

Fresh from her burst into the literary stratosphere after her appearance at President Biden's inauguration, poet Amanda Gorman will recite a new poem during the Super Bowl LV pre-show next Sunday.
The country's newest literary superstar, 22-year-old poet Amanda Gorman, is going to be showcased at an event more often associated with beer, chicken wings and Cheetos: Super Bowl LV.

Gorman, the country's first National Youth Poet Laureate, dazzled viewers with her recitation of her poem "The Hill We Climb" at President Biden's inauguration this month, and the video of her performance has gone viral. She will be reciting at the Super Bowl pre-show on Feb. 7, before the Kansas City Chiefs play the Tampa Bay Buccaneers.

Gorman could reach far more Americans through her appearance at the Super Bowl than she did during Inauguration Day: viewership for the football game in 2020 peaked at 99.9 million — by contrast, President Biden's inauguration — which was one of the most-watched in American history — drew 33.8 million viewers.

Her new poem will honor three Americans — Los Angeles educator Trimaine Davis, Florida nurse manager Suzie Dorner and Pittsburgh-based James Martin, a Marine veteran who volunteers with the Wounded Warrior Project and who has taken in local kids facing issues at home — for their work during the coronavirus pandemic. The three have also been named honorary captains for the Super Bowl by the NFL.

It's unclear if Gorman's invitation came directly from the NFL or from Jay-Z, whose Roc Nation entertainment company formed a partnership with the football league last year to help amp up its social justice profile in the aftermath of the controversy surrounding former San Francisco 49ers quarterback Colin Kaepernick and his activism.

It's been a big week for Gorman, who is the the youngest poet in presidential inauguration history. Not only did she announce her Super Bowl performance, but she also nabbed a modeling contract with one of the world's top modeling agencies, IMG (as did Vice President Harris' stepdaughter Ella Emhoff).

Gorman is also enjoying massive presales for three upcoming books being published by Penguin Random House, including a collection of her work called The Hill We Climb and Other Poems and a children's book entitled Change Sings, both of which are scheduled to be published on Sept. 21. A collectible edition of her inauguration poem will be published on March 16. Penguin Random House has announced that each of the three books will have a whopping initial publishing run of 1 million copies — putting her work in the same sales league as titles in Lemony Snicket's A Series of Unfortunate Events.
#Coronavirus
Add Comment