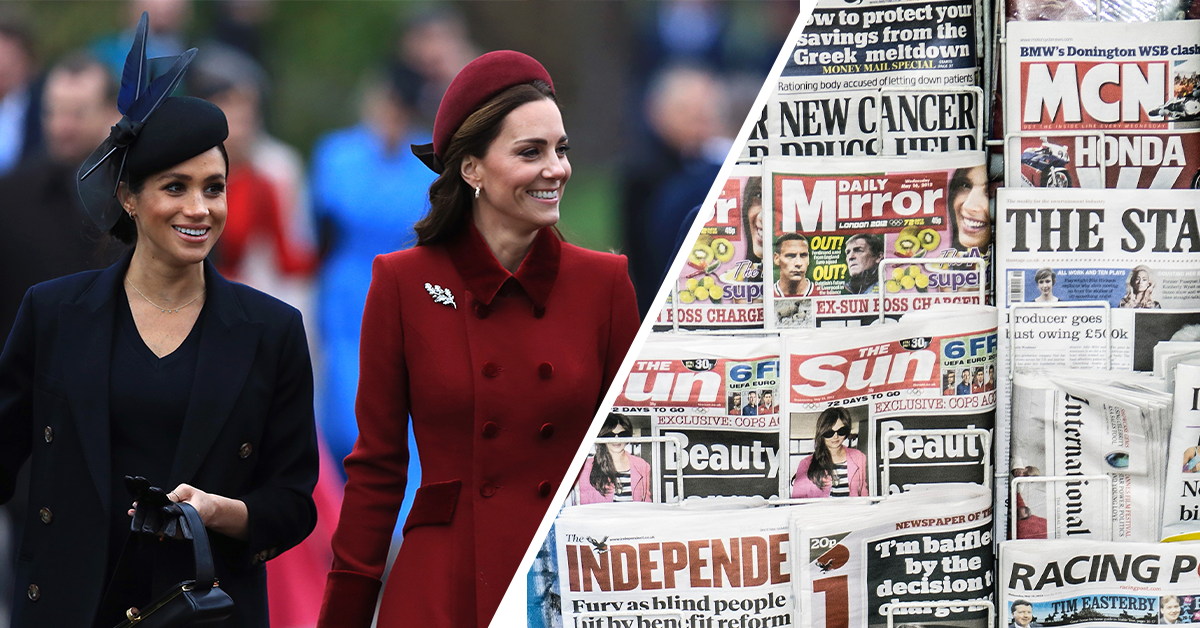 A review of negative published stories about Meghan Markle and Kate Middleton shows disparities in how the royal press office defended them.

Meghan Markle, the Duchess of Sussex, made a stunning accusation during her blockbuster interview with Oprah Winfrey earlier this month: The Palace had failed to correct false and damaging stories about her while she was a working member of the royal family, even as it defended other members.

“Not only was I not being protected, but they were willing to lie to protect other members of the family,” she said. “They weren’t willing to tell the truth to protect me and my husband. ... They knew it wasn’t true. And I thought, Well, if they’re not going to kill things like that, then what are we going to do?”

I reviewed thousands of news articles from June 1, 2018 — the start of Meghan’s first full month as a working member of the royal family — to Jan. 1, 2020, days before Harry and Meghan announced they would step back from royal life. Specifically, I compared coverage of Prince Harry and Meghan (the Sussexes) to coverage of Prince William and Kate Middleton (the Duke and Duchess of Cambridge).

Then I looked at the times a royal family spokesperson went on the record to confirm, deny, or decline to comment on whatever the article was about — and found that Meghan has a strong argument.

Members of the royal family rarely issue personal statements, and the family’s media team rarely goes on the record with the press in response to a story or request for comment. (Buckingham Palace did not provide an on-the-record response for this article. A spokesperson for the Sussexes said, “No comment.”)

It’s important to understand the outsize influence the Palace press office wields as it manages the UK media’s voracious hunger for royal family coverage. It can try to kill false or misleading stories before publication (journalists have said as much); it can contest claims made by anonymous sources by going on the record; it can use pressure, particularly in the form of access to the royals or legal threats, to reframe false or unflattering articles.

This isn’t just about the Sussexes and Cambridges. During the time period I examined, the Palace went on the record to, among other things, justify Prince Edward’s use of a £6,000 private jet for official travel instead of a £250 train, confirm that the Queen no longer wears clothes with real fur, and defend Prince Andrew for consorting with a young woman at the home of his sex offender friend Jeffrey Epstein.

But the Palace generally didn’t go on the record to correct a damaging narrative involving Meghan unless the story also had the potential to tarnish the monarchy’s conservative reputation — like the false reports that Harry and Meghan would raise their child genderfluid — or that of the future monarchs, William and Kate.

By November 2018, six months after her wedding, a distinctly negative narrative about Meghan had emerged in the UK press. An anonymously sourced report in a Nov. 26 Telegraph story alleged that Meghan made Kate cry during the wedding planning process. The tabloids seized the story, and a “Meghan vs. Kate” narrative was born. (The British press has always loved to pit royal women against each other.)

The official handling of this particular story marked “a turning point” when “everything changed” for the Sussexes, Meghan told Oprah. Despite the fact that “everyone,” including members of the royal family, knew that the story in the press was wrong and that it had actually been Kate who made her cry, the Palace press office didn’t correct it. This is what Meghan was referring to when she said “they were willing to lie to protect other members of the family.”

As I showed last year, the UK press didn’t need much encouragement to favor Kate over Meghan in its royal coverage. Indeed, the Palace has protected Kate from the pettiest of negative press for a decade: The night of her first official solo engagement in October 2011, the Palace press team didn’t just issue corrections in response to fake stories that she wore hair extensions — they got the Daily Mail to take down its story. The original URL now automatically redirects to a later story about the childhood scar the reporter mistook for extensions.

Years later, they’re still at it. In September, lawyers for the Cambridges successfully got Tatler magazine to remove “inaccuracies and false representations” from a profile of the future queen. One of the offending details? Kate allegedly had a poster of William in her bedroom as a teenager.

Compare that with the story about Harry being targeted as a “race traitor” by white supremacists for marrying Meghan, in which the Palace declined to comment on ongoing investigations as opposed to saying anything specific about threats to the first person of color to marry into the royal family in recent memory.

We don’t know the internal deliberations of the Palace’s press team. What we do know is what they say — or don’t say — in public. Here are 26 selected stories, in chronological order over the roughly 18-month period Meghan was a working member of the royal family, showing when the Palace decided to speak out for Kate and when they decided to do the same (or not) for Meghan. 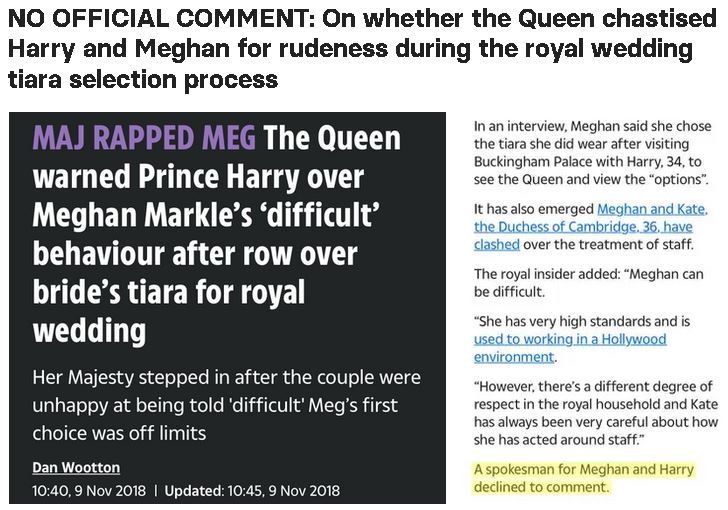 Note: The Telegraph article that broke the story on Nov. 26, 2018, did not state whether the Palace had been contacted for comment.

The Telegraph, Nov. 23, 2018: “A Kensington Palace source said: ‘The funds raised by the cookbook are supporting the Hubb Community Kitchen, which is an independent project that leases space from Al Manaar. The project is empowering the women and helping provide some hope and joy to a community that has gone through unspeakable tragedy.’” 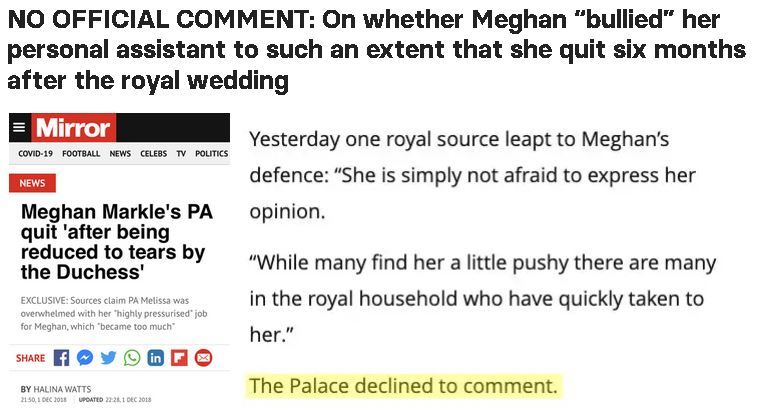 Note: On March 2, the Times published a story alleging that in October 2018, the Sussexes’ communications secretary at the time, Jason Knauf, made a formal complaint to HR about Meghan’s treatment of her personal assistants. The Sussexes forcefully denied these accusations. 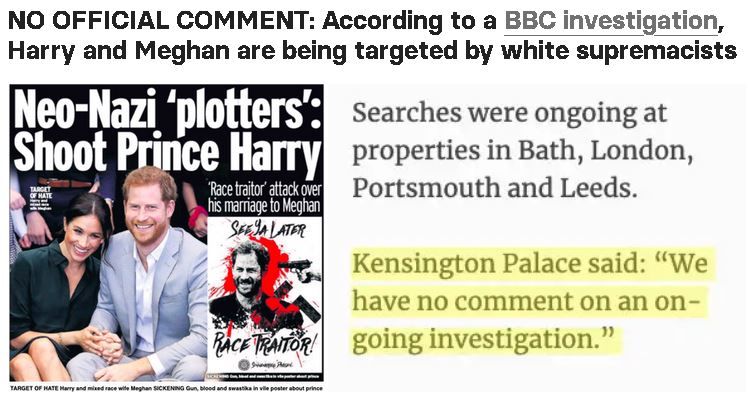 The Mirror, Dec. 7, 2018: “Kensington Palace said: ‘We have no comment on an ongoing investigation.’”

The Express, Dec. 8, 2018: A Kensington Palace spokesman said, “Their Royal Highnesses attend these meetings in turn. This session was focused on [programs] led by the Duke of Sussex.” 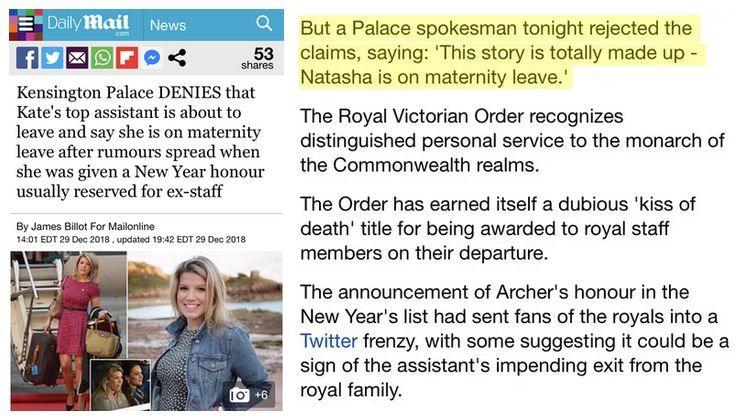 The Mail, Dec. 28, 2018: “A Palace spokesman tonight rejected the claims, saying: ‘This story is totally made up — Natasha is on maternity leave.’” 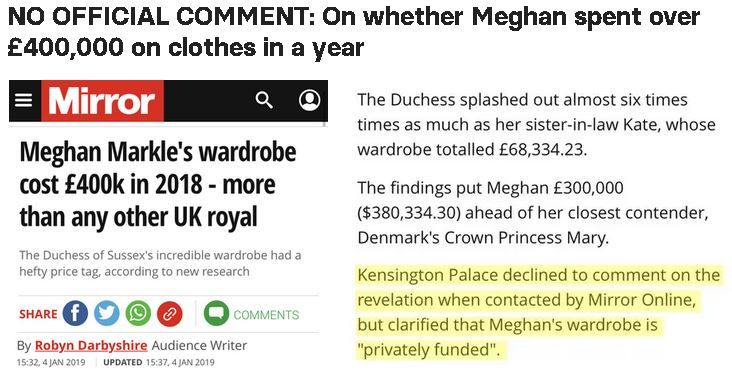 The Mirror, Jan. 4, 2019: “Kensington Palace declined to comment on the revelation when contacted by Mirror Online, but clarified that Meghan's wardrobe is ‘privately funded.’”

The Sun, Jan. 15, 2019: “Kensington Palace was contacted by the Sun Online but declined to comment.” 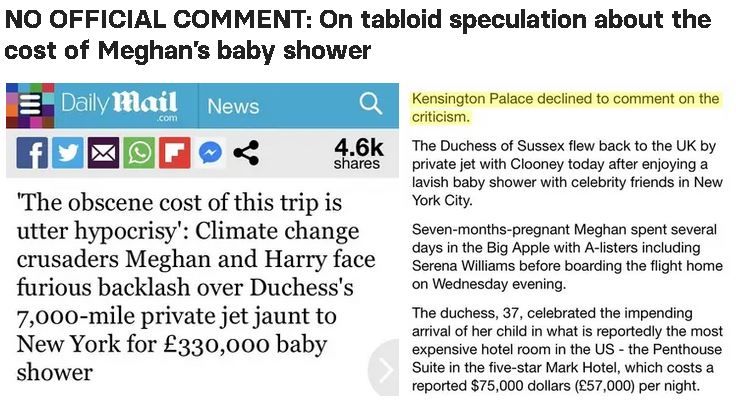 MailOnline, Feb. 21, 2019: “Kensington Palace declined to comment on the criticism.” 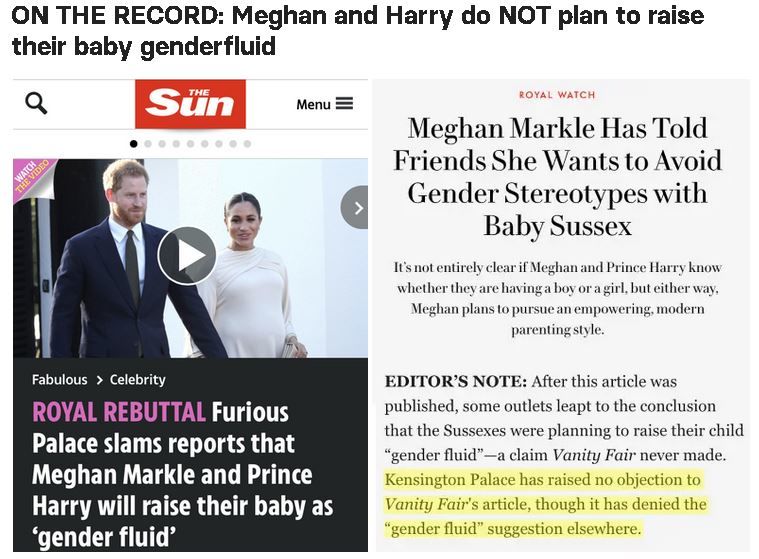 The Sun, Mar. 2, 2019: “Yesterday we reported that [a] source close to the couple told Vanity Fair that Meghan, 37, ‘won't impose stereotypes’ on the royal baby, due in April. She had reportedly told guests at her recent New York baby shower that she would raise their baby in a ‘fluid’ way. But, in a rare royal denial, Kensington Palace issued a statement saying: ‘This story is totally false.’”

Vanity Fair, originally published Feb. 28, 2019: “EDITOR’S NOTE: After this article was published, some outlets leapt to the conclusion that the Sussexes were planning to raise their child ‘gender fluid’ — a claim Vanity Fair never made. Kensington Palace has raised no objection to Vanity Fair’s article, though it has denied the ‘gender fluid’ suggestion elsewhere.” 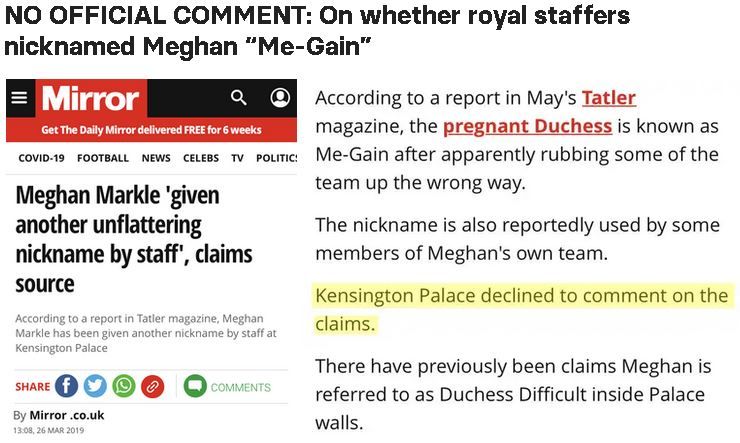 Note: The Tatler article that broke the story did not state whether the Palace had been contacted for comment.

MailOnline, Apr. 4, 2019: “Speaking to the MailOnline a Palace spokesperson said: ‘As part of the broader management of the estate, the physical surroundings of royal residences are under constant review. ‘From time to time, adjustments are made to the landscaping and gardens, including hedging.’ 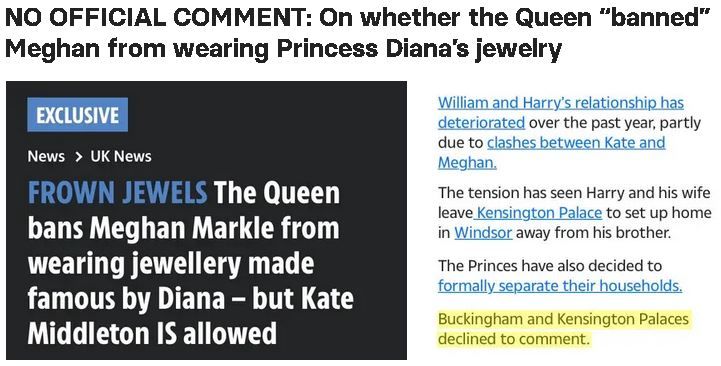 The Sun, April 4, 2019: “Buckingham and Kensington Palaces declined to comment.” 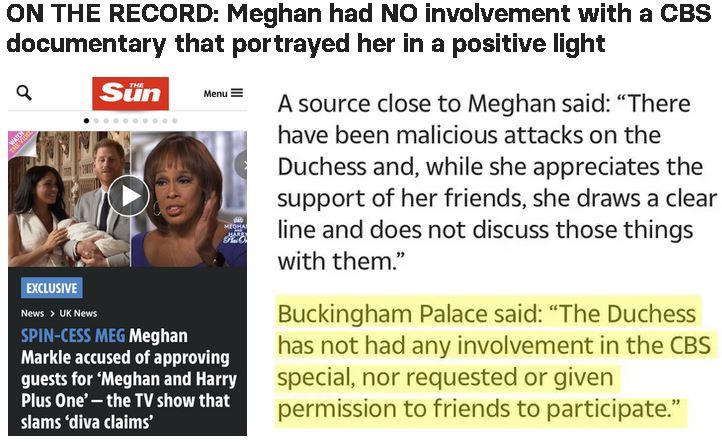 The Sun, May 17, 2019: “Buckingham Palace said: ‘The Duchess has not had any involvement in the CBS special, nor requested or given permission to friends to participate.’” 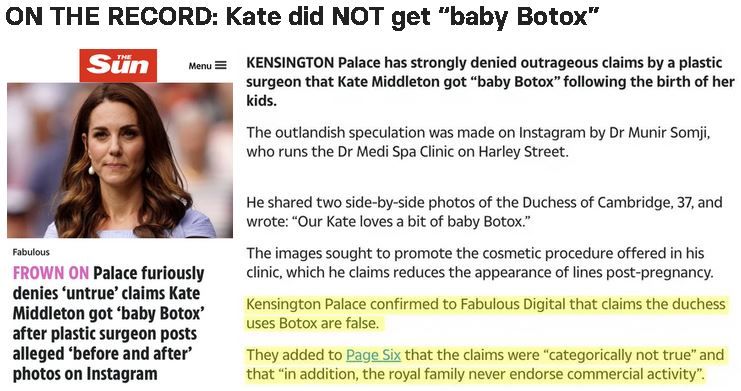 The Sun, July 25, 2019: “Kensington Palace confirmed to Fabulous Digital that claims the duchess uses Botox are false. They added to Page Six that the claims were ‘categorically not true’ and that ‘in addition, the royal family never endorse commercial activity.’”

Sunday Mirror, Aug. 10, 2019: “Last night a spokesman for Meghan thanked us for alerting her to the scam. A royal source added: ‘This is obviously not true and an illegal use of the duchess’ name for advertising purposes. We will follow our normal course of action.’”

MailOnline, Aug. 22, 2019: “A spokesman for Kensington Palace said: ‘We do not comment on what they do with their private time as a family.’”

Note: The Sun alleged “William and Kate were not aware of the alleged switch and had not asked for special treatment” but did not provide a source for that claim. 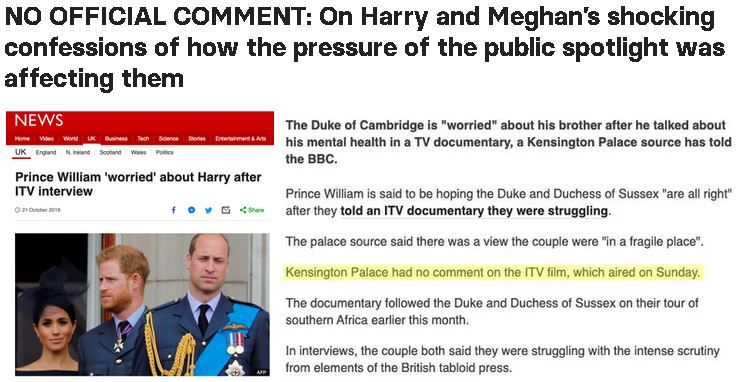 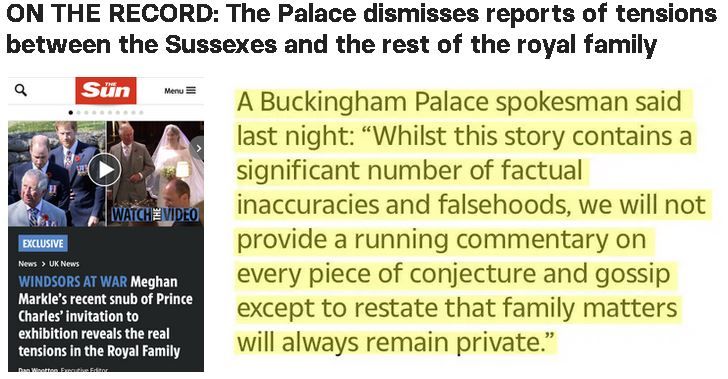 The Sun, Oct. 25, 2019: “A Buckingham Palace spokesman said last night: ‘Whilst this story contains a significant number of factual inaccuracies and falsehoods, we will not provide a running commentary on every piece of conjecture and gossip except to restate that family matters will always remain private.’”

The Express, Nov. 21, 2019: “Kate was due to join William for the ceremony this evening but Kensington Palace confirmed the Duchess of Cambridge had to cancel ‘due to their children.’ Kate’s last minute cancellation is not due to a health issue of either Prince George, Princess Charlotte or Prince Louis.” 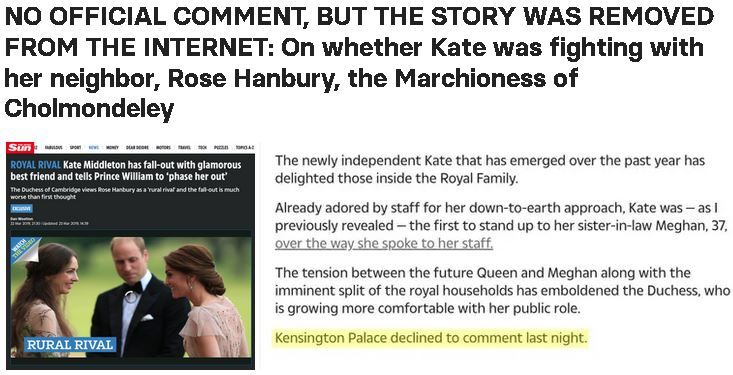 Note: The Sun broke this story, which was picked up by many outlets. According to Archive.org’s Wayback Machine, the piece was removed from the Sun’s website at some point after June 3, 2020.

The Sun declined to comment on the removal when contacted by BuzzFeed News. 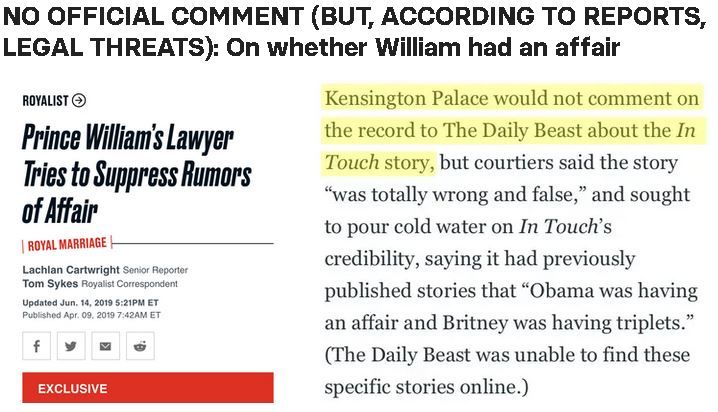 The Daily Beast, Apr. 9, 2019: “Kensington Palace would not comment on the record to The Daily Beast about [the story that Prince William had an affair], but courtiers said the story ‘was totally wrong and false,’ and sought to pour cold water on In Touch’s credibility, saying it had previously published stories that ‘Obama was having an affair and Britney was having triplets.’ (The Daily Beast was unable to find these specific stories online.)”

Correction: The negative media narrative around Meghan began to emerge in November 2018, six months after her wedding. An earlier version of this story misstated the year.