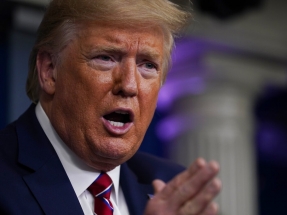 New York and Illinois followed California on Friday in locking down to stem the coronavirus pandemic as US President Donald Trump declared the United States was already "winning" the war despite a rapid rise in confirmed cases and deaths.
The move effectively seals off America's largest cities – New York, Los Angeles and Chicago – with New Jersey also preparing to follow and Connecticut shutting.

But Trump insisted there was no need for a national lockdown, arguing that other parts of the US weren't hurting as much as its most populous states.

"We're all in quarantine now," Cuomo told reporters, warning of civil fines and mandatory closures for anyone violating the order, which takes effect on Sunday evening.

The escalation came as Covid-19-linked deaths in the US rose to 216 – more than doubling in three days – with more than 16,600 confirmed infections, according to a tally by Johns Hopkins University.

Despite the surge, Trump said the world's number one power was "winning" and "going to win this war."

"Those are really two hotbeds. Those are probably the two hottest of them all in terms of hotspots," Trump told the daily White House news conference, adding that states in the American Midwest were not registering as many confirmed cases.

"So no, we're working with the governors and I don't think we'll ever find that necessary," he added.

But shortly afterwards Illinois Governor J.B Pritzker announced an immediate stay-at-home order for the state "to avoid the loss of potentially tens of thousands of lives."

The head of the US Army Corps of Engineers, Todd Semonite, said the agency was working on refitting more than 10,000 hotel and dormitory rooms in New York into temporary hospitals to alleviate the burden on health centres.

"We would like to think we can do this in three or four weeks and try to go as fast as we can," he said.

The number of confirmed infections in New York state jumped past 7,000 on Friday, largely because of an increase in testing, Cuomo said, as he announced he would pass an executive order mandating that only essential businesses can remain open from late Sunday.
Add Comment