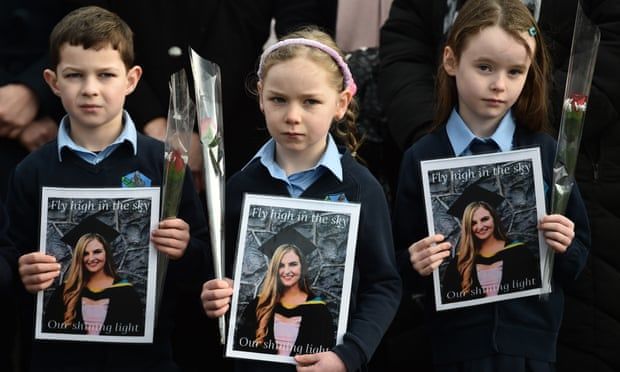 The killing of Ashling Murphy this month has highlighted the lack of progress on promises made after Sarah Everard’s murder
Leading campaign groups that have spent years tackling the growing problem of violence against women and girls are becoming increasingly frustrated with an apparent lack of action from the home secretary six months after the government announced a major strategy designed to tackle the issue.

Despite the promise of a “radical programme of change” announced by Priti Patel in late July last year, campaigners say a number of central pledges have disappeared without trace, or have not been implemented, without proper explanation.
The strategy was announced against a backdrop of widespread calls for urgent and radical change following the murder of Sarah Everard, who was killed while walking home

from a friend’s house in south London several months earlier. These calls were made again this month following the murder of schoolteacher Ashling Murphy in Ireland.

The 23-year-old was attacked and strangled while out jogging on a canal path near Tullamore, County Offaly. Last Wednesday, a week after her death, a 31-year-old man was remanded in custody charged with her murder.

Georgie Laming, campaigns manager at Plan International UK, whose campaign for public sexual harassment to become a specific offence has 500,000 supporters, said: “It has been six months since the home secretary promised a review into the legal gaps on public sexual harassment, and a decision on a new law to criminalise it. But we are yet to see any movement. Women and girls can’t afford to wait any longer.”

Saskia Garner, head of policy and campaigns at the Suzy Lamplugh Trust, said: “We would welcome an update on all commitments made in the violence against women and girls strategy. All these issues urgently need to be addressed to ensure that the voices of women and girls experiencing devastating crimes including stalking and harassment are heard.”

Another source said: “There is deep frustration over the apparent progress over elements of the strategy.

“The fact is women are still being killed in high-profile murders every few months but there does not seem to be any burning desire to actually deliver key parts.”

Chief among their concerns is the outcome of a legal review committed to by the Home Office into gaps in existing law and how a specific offence for public sexual harassment could address those. Sources say there is still no timescale for when the review is complete, or even if it will support calls for a new harassment offence.

Campaigners also point out that a much-hyped information campaign targeting perpetrators of violence against women has yet to be launched despite hopes that it would be up and running before Christmas, a period when domestic abuse traditionally rises.

In addition, women’s groups argue they do not know what has happened to a £5m “safety of women at night fund” or another £3m to “better understand what works to prevent violence against women and girls.”

Questions also surround the StreetSafe app, which allows women to record where they feel unsafe, and which was the focus of a three-month pilot that ended in early December.

More than 180,000 people responded to a consultation on the strategy, the vast majority after it reopened following Everard’s murder.

A Government spokesperson said: “Since the launch of the strategy we have delivered several of its commitments, helping to tackle this horrific crime. For the first time ever there is a national police lead for violence against women and girls, we’ve implemented the landmark domestic abuse act, launched the safety of women at night fund and given out a further £25m for safer streets projects. We are also carefully considering the Law Commission’s recommendations on a specific public sexual harassment offence.”

“We know there is more to do, which is why we continue to work closely with the women’s sector and academics on the national communications campaign, which will launch shortly.”
#Priti Patel
Add Comment