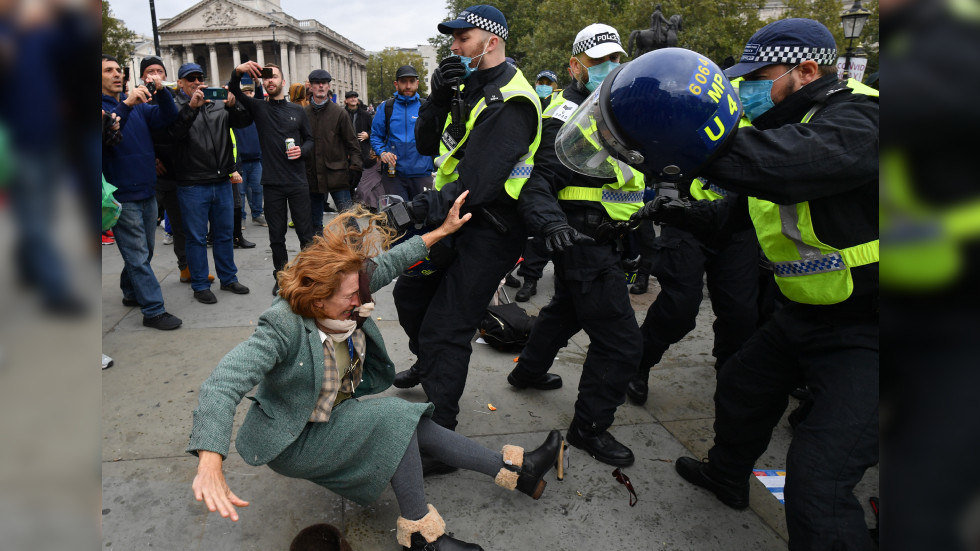 The shocking moment police officers brutally slammed a woman to the ground during a protest against Covid-19 restrictions in London was caught on camera, and the footage is being widely shared online.

The ugly scene unfolded as demonstrators massed in Trafalgar Square on Saturday for a ‘We Do Not Consent’ rally against the UK’s coronavirus guidelines. The video shows the protester standing on a portable chair before police officers arrive and pull the chair from under her feet.

The woman, who appears to be middle-aged, is involved in a tussle with one police officer when the large cop delivers a powerful shove that sends her crashing to the ground. The footage shows the woman in considerable distress on the tarmac as the crowd admonishes the officer.

I mean, you seem intent on calling me a liar or something for some reason https://t.co/mjb1U1yO30 pic.twitter.com/BjypLSglLJ

The footage racked up thousands of views on social media platforms including Twitter and Facebook on Sunday. Several thousand demonstrators attended Saturday’s protest in Trafalgar Square on the second consecutive week of anti-lockdown protests in the UK capital.

London Mayor Sadiq Khan is being blasted for hypocrisy for dubbing the rally “unacceptable,” despite giving his backing to Black Lives Matter protests earlier this year.

Sadiq Khan, June 6 on BLM protest: “I stand with you and share you anger & pain”

Sadiq Khan today on anti-lockdown protest: “ This is not acceptable... leave now”

Once agin, one rule for some... and another for others 🤷🏼‍♂️ https://t.co/GHeE9OBTiy