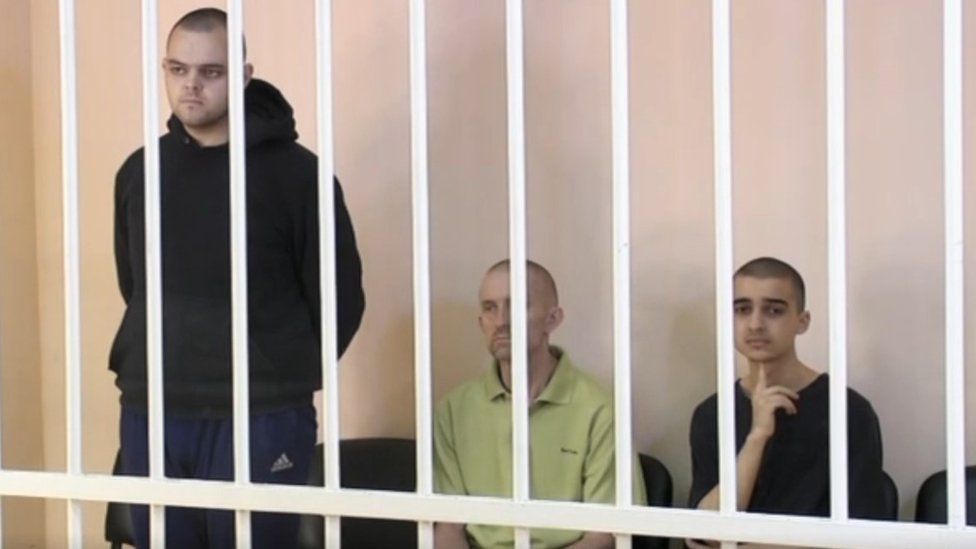 Two Britons captured by Russian forces in Ukraine have appeared in court in territory held by pro-Russian rebels.
Aiden Aslin, 28, from Nottinghamshire, and Shaun Pinner, 48, from Bedfordshire, are being held in the so-called Donetsk People's Republic.

They are reportedly charged with being mercenaries. But their families say they were in Ukraine's military.

It is feared the court, which is not internationally recognised, could pass the death penalty if it convicts them.

A video has emerged of the two Britons attending a court hearing alongside a third man, Moroccan national Saaudun Brahim.

In the footage, Mr Aslin and Mr Pinner spoke only to confirm they knew the charges against them and were happy for their case to proceed without the evidence of witnesses.

Both were able to stand unaided and seemed aware of their surroundings.

They have also been accused of violent seizure of power and undergoing training to carry out terrorist activities.

The self-proclaimed Donetsk People's Republic, or DNR, was set up by pro-Russian separatists in 2014.

According to Russia's Interfax news agency, leader of the DNR Denis Pushilin has said the men will be charged in the region's supreme court.

Footage of Mr Aslin released shortly after his capture in the Ukrainian port city of Mariupol led many to fear for his wellbeing.

The families of both Mr Aslin, from Newark, and Mr Pinner released statements saying that they were long-serving members of the Ukrainian military and not volunteers or mercenaries.

Both men are said to have lived in Ukraine since 2018.

In a statement on Tuesday, Mr Aslin's family said it "was a very sensitive and emotional time for our family, and we would like to say thank you to all that have supported us".

They added: "We are currently working with the Ukrainian government and the Foreign Office to try and bring Aiden home. Aiden is a much-loved man and very much missed, and we hope that he will be released very soon."

Asked about the case earlier, Justice Secretary Dominic Raab told LBC radio: "I don't know all the details, but of course we would expect the laws of armed conflict to be respected, and we will make sure that we will make all the representations.

"I know the Foreign Office will be looking at making sure all those representations are made."
#Dominic Raab  #Raab
Add Comment