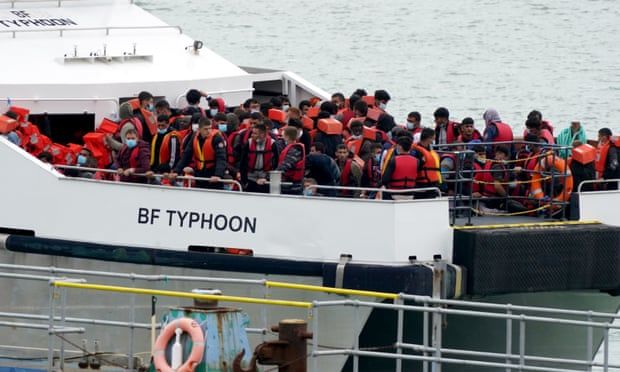 MoD says 696 people made journey in small boats on Monday, as concerns grow over government response

The number of people crossing the Channel in small boats to seek refuge in the UK hit a daily record for the year so far on Monday, as Border Force staff braced themselves for thousands more arrivals this summer.

The Ministry of Defence said 696 made the journey in 14 small boats on Monday. There were 460 arrivals on Saturday and 247 on Friday, with more than 1,000 people crossing last week.

The figures came amid reports of growing concern over plans to stem the number of boats carrying asylum seekers across the Channel.

Critics of the government’s Rwanda policy have seized on the latest figures as evidence that there has been no deterrent effect upon asylum seeker numbers, as claimed by government ministers.

Paul O’Connor, the head of bargaining for the Public and Commercial Services (PCS) union – which represents Border Force staff – said: “These statistics seriously undermine the government’s claim that their policy of deporting people to Rwanda acts as a deterrent. It’s time for the government to drop the scheme and switch to an asylum system based on humanity, not hostility.”

Defence chiefs are also said to be fed up with trying to enact the prime minister and home secretary’s rapidly imploding plan of using the military to control small boats in the Channel.

Home Office sources have admitted the UK could receive up to 60,000 people by small boat this year – double last year’s record – with another 20,000 arriving by different routes.

Both candidates vying to become the next Conservative party leader, Liz Truss and Rishi Sunak, have promised to push ahead with the Rwanda plan if elected.

On Tuesday, large groups of recent arrivals, including young children, were seen being brought ashore in Ramsgate before leaving the Kent port on doubledecker buses.

In April, the government announced plans to send asylum seekers to Rwanda as part of a five-year trial.

Johnson, with the support of the home secretary, Priti Patel, claimed the plan would “over time prove a very considerable deterrent”.

But the deal has been heavily criticised for failing to curb the numbers, as well as being expensive and in breach of human rights laws. Since it was signed, 11,827 asylum seekers have arrived in the UK.

The first deportation flight was blocked after a late intervention by the European court of human rights.

The home affairs committee last month found there was “no clear evidence” that the UK’s plan to send asylum seekers to Rwanda would stop risky Channel crossings.

A recent Home Office report said the Border Force may have made the small boats crisis worse.

Commissioned by Patel, it concluded that the resources required to prevent illegal entry to the UK by small boats crossing the Channel were “not sustainable”.

Alex Downer, the former leader of Australia’s Liberal party, who carried out the review, criticised “a cycle of crisis management” in the final report. Patel welcomed its “constructive recommendations”.

The Rwanda deal cost an initial £120m, much of which the Rwandan government has already spent. The payment does not include the costs of flights, housing for five years or other benefits given to anyone relocated in the central African state.

Several asylum seekers, the PCS union and charities including Care4Calais and Detention Aid are challenging the legality of the policy, with court hearings set for September and October.

A government spokesperson said: “The Nationality and Borders Act makes it a criminal offence to knowingly arrive in the UK illegally and we have introduced life sentences for those who facilitate illegal entry into the country. Since the introduction of the act, 23 people have been arrested.

“Under our migration and economic development partnership with Rwanda, we are continuing preparations to relocate those who are making dangerous, unnecessary and illegal journeys into the UK in order for their claims to be considered, for them to be able to rebuild their lives and deter others from making life-threatening crossings.”