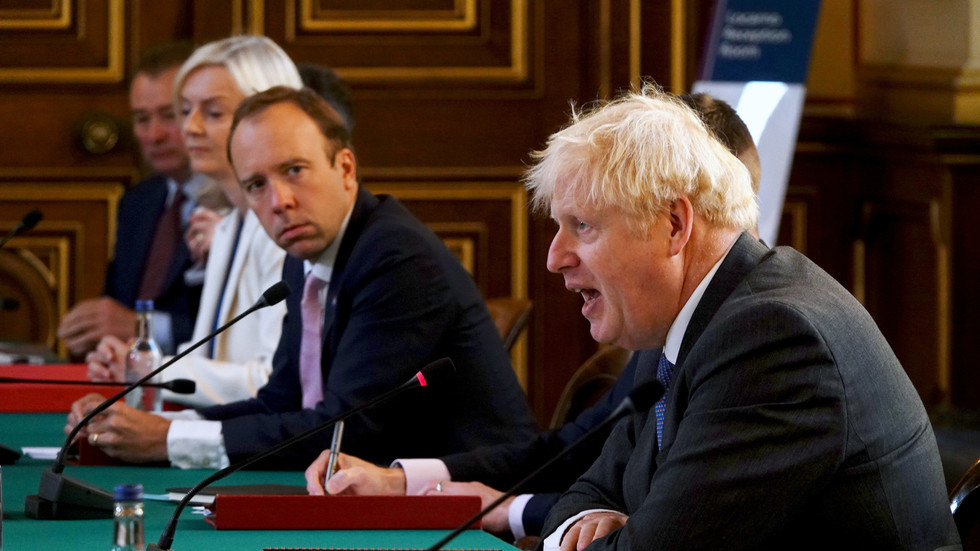 Matt Hancock allegedly failed to inform Boris Johnson about a study that showed Covid-19 jabs are effective against the Delta variant, during a meeting to discuss lifting restrictions. The health department denies the allegation.
A major Public Health England (PHE) study found that the AstraZeneca and Pfizer vaccines were more effective at preventing hospitalisation with the strain than with other Covid variants. The health secretary was aware of the promising results but chose not to tell Johnson about them during a meeting to decide whether to postpone the planned lifting of restrictions on June 21, the Telegraph reported, citing sources familiar with the discussion.

The data was also absent from briefing papers given to Johnson by finance minister Rishi Sunak and cabinet minister Michael Gove ahead of the critical meeting, the outlet said. Had the prime minister been aware of the study’s findings, he may have reconsidered the controversial decision to push back reopening until July 19, the Telegraph claimed.

Senior ministers were reportedly angered by how the decision was ultimately made, and were particularly upset by the fact that SAGE scientists did not provide explanations to back up their claim that lifting restrictions in June would lead to a surge in hospital admissions.

The troubling allegations have prompted frustration within the government. One cabinet minister told the paper that, in light of the allegedly withheld data, businesses should be allowed to reopen, as there appears to be little justification to inflict further harm on the economy.

Tory MP Steve Baker, the deputy chairman of the anti-lockdown Covid Recovery Group, said that he couldn’t understand why Hancock would have kept the data from Johnson, adding that the allegation, if true, will be a “matter of interest” to Parliament.

“If Matt Hancock was deliberately withholding relevant information, what was he trying to gain? Was the Prime Minister bounced?” he asked, when pressed to comment by the Telegraph.

A spokesperson for the health department denied that Hancock had “bounced” the prime minister, and explained that information provided by PHE was “shared across government” ahead of the meeting.

Johnson’s aides allegedly received an email about the results, but the message came just hours before the meeting was set to take place – what sources described as too little too late.

Other government sources denied that SAGE had presented models without providing information about how they were compiled.

One of the sources who spoke with the Telegraph said that “equivalent data” to the PHE study was presented to Johnson by SAGE scientists, and that the ministers “knew that the vaccines work” when they ultimately decided to postpone reopening. Keeping restrictions in place would give the government more time to “get more jabs in arms,” the source said.

After announcing the controversial decision to extend the restrictions, Johnson said he was “confident” that measures would finally be lifted in July. The easing of restrictions would bring an end to social distancing guidelines and allow concert halls and other venues to reopen for the first time since March last year.
#Boris Johnson  #AstraZeneca  #Vaccines  #COVID-19  #Johnson  #vaccine  #Pfizer  #Covid
Add Comment