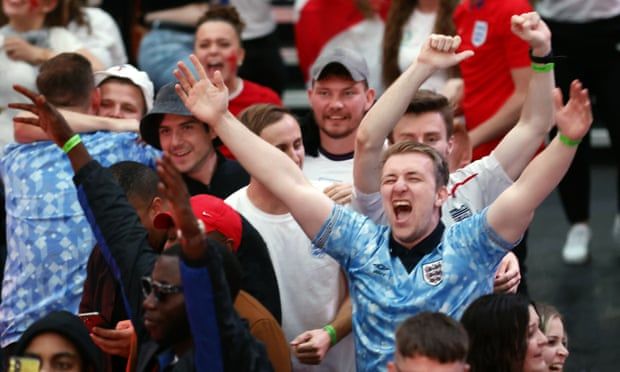 Three Lions by Baddiel, Skinner and the Lightning Seeds has returned to the UK Top Five, leading a wave of football favourites in the charts as excitement builds towards Sunday’s Euro 2020 final between England and Italy.

The song was released ahead of the 1996 European Championship and its central line “football’s coming home” has been revived as the mantra of England’s fanbase in recent years, a statement of national pride and self-belief that has sometimes seemed borderline delusional in the past, but which is now more tantalising to sing than ever.

Three Lions reached No 1 on release, and a rerecorded version topped the chart during the 1998 World Cup. The original returned to the Top 10 for World Cups in 2006 and 2010, before topping the chart once more during the 2018 campaign, powered by England’s success in reaching the semi-finals. It is at No 4 this week.

It was waspishly referenced by Denmark goalkeeper Kaspar Schmeichel ahead of England’s semi-final this week: “Has it ever been home?” he said of the European Championship. “Have you ever won it?” 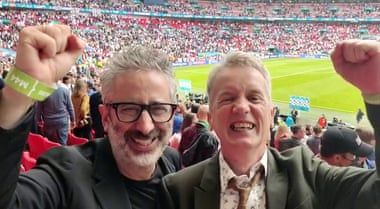 At No 48 in this week’s chart, Neil Diamond’s Sweet Caroline has its highest placing since its original release in 1971 after it was enthusiastically sung by England fans and players following their semi-final victory. “You can’t beat a bit of Sweet Caroline can you?” said Gareth Southgate afterwards. “That’s a belter, really.”

Diamond has said it was “a thill” to hear the fans sing the song, whose hearty chant and “good times never seemed so good” refrain has made it a favourite at sporting events from baseball to rugby league.

Viral fan-created chants have been a major part of recent campaigns, including a twist on Gala’s 1996 dance-pop hit Freed From Desire – in which “mind and senses purified” becomes “your defence is terrified” – and Southgate You’re the One, a loving ode cobbled from Atomic Kitten’s No 1 hit Whole Again and a snatch of Three Lions: “Southgate you’re the one, you still turn me on, football’s coming home again”, runs the new chorus.

The popularity of the latter chant prompted the girl group to perform it live at an appearance in Croydon ahead of England’s 4-0 quarter final win over Ukraine last Sunday. After it went viral, they recorded a studio version that was released on Tuesday. Despite the short run-up, it has managed to reach No 86 in this week’s chart.

The chant was first sung during the 2018 World Cup. “I woke up one day with 20-odd notifications on my phone, videos of lads chanting Whole Again,” says the group’s Liz McClarnon. “I was like: I don’t understand what’s happening.”

Whole Again, released in 2001, was co-written by Andy McCluskey of 80s synth-poppers OMD, and McClarnon credits its uptake to it being “so easy to remember – you feel like you’d be able to come up with it in five minutes. But I bet it took Andy ages to do it.” The rerelease brings singer Jenny Frost – “so protective and lovely and fabulous” – back into the band, but McClarnon says there are “20 million question marks” over what they will do next.

On Southgate, she says: “I love this calmness, this stoic air that he has. We’ve got a lot of managers in the Premier League who are quite fiery and full-on – and that’s great, I do love that passion. But he’s captured the nation’s heart by being cool, yet not super-cool; you can still see the concern on his face. He’s like a cool, safe dad, that kind of fella. He looks like he looks after the boys.”

Vindaloo by Fat Les, the supergroup featuring Keith Allen, Damian Hirst and Blur’s Alex James who debuted in 1998, is at No 36 this week, while New Order’s World in Motion is at No 61.

This year’s official England anthem, Olé (We Are England) by rappers Krept & Konan with guest stars Morrison, S1lva and M1llionz has underperformed – perhaps hamstrung by the difficulty of chanting its quick-fire lyrics – and reaches No 59.