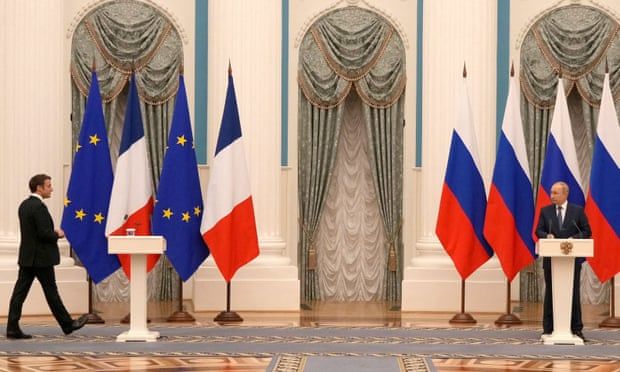 Talks between Macron and Putin fail to produce Ukraine breakthrough

Emmanuel Macron and Vladimir Putin did not appear to reach a breakthrough in marathon talks at the Kremlin on Monday evening aimed at fending off a Russian attack on Ukraine.

After five hours of negotiations, Macron warned that the two sides needed to work quickly to avoid the risk of an escalation.

“Right now the tension is increasing and the risk of destabilisation is increasing,” Macron said, according to a simultaneous translation of his remarks following the talks. “Neither Russia, nor the Europeans want chaos or instability, when nations have already suffered from the [coronavirus] epidemic. So we need to agree on concrete measures.”

Macron is due to travel to Kyiv on Tuesday, where he will hold talks with the president, Volodymyr Zelenskiy. He said he plans to brief Putin on the results of the discussions in a phone call.

It is not clear how Macron’s shuttle diplomacy can satisfy Russia’s demands that Ukraine membership in Nato be ruled out while maintaining that the alliance’s open door policy is “existential for Europe”, as he said in opening remarks.

There were some signs of progress from the talks, which were held over a seven-course dinner that included rebo and chardonnay from a Russian winery.

Without going into specifics, Putin said it was possible to consider “a number of [Macron’s] proposals and ideas … in order to lay a foundation for our further steps.”

But he also blasted Nato’s open door policy, saying it only benefited the United States. He also appeared to be needling Ukraine’s Zelenskiy by saying that Russia was ready to offer political asylum to his rival Petro Poroshenko, who has been charged with treason over his alleged involvement with financing Moscow-backed separatists.

“I believe [Poroshenko’s] made a lot of mistakes,” Putin said. “And yet I believe his prosecution for treason is excessive by the incumbent leadership. We stand ready to grant such people as Mr Poroshenko asylum in Russia.”

As the two met, Pentagon spokesman John Kirby said that Putin had “added to his force capability along that border with Ukraine and in Belarus”. US officials have said that Russia already has more than 70% of the troops it would need to launch an attack on Ukraine, and some analysts have said they believe the Kremlin is buying time for its buildup in its negotiations with western leaders.

Macron had warned against expecting “miracles” in his talks with Vladimir Putin.

The French president had been upbeat about the chances of finding a compromise over European security that would persuade Putin not to order an invasion but, on arrival in Moscow on Monday, Macron sought to play down expectations.

“We can prevent some things in the short term,” he said in Moscow, but added: “I don’t think there are short-term victories.

“I don’t believe in spontaneous miracles. There is lots of tensions, nervousness,” Macron added. 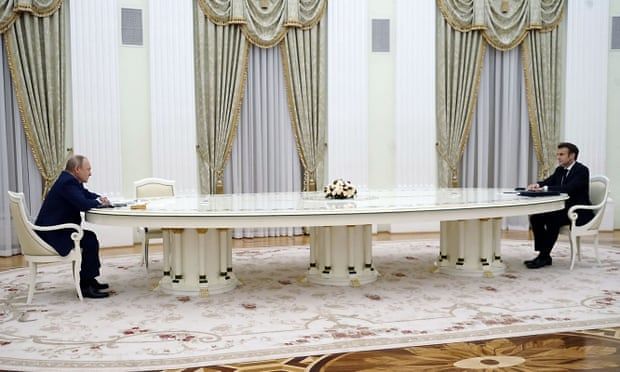 Before the high-stakes meeting, ​Moscow had​ also​ sought to temper expectations.​

​“The situation is too complex to expect decisive breakthroughs in the course of one meeting​,” said Kremlin spokesperson Dmitry Peskov.​ ​“​In recent days there has been nothing new on the topic of security guarantees for Russia, our western interlocutors prefer not to mention this topic.​”

Macron’s meeting with Putin was part of a frenetic day of diplomacy under the shadow of a possible new war in Europe. Germany’s chancellor, Olaf Scholz, was meeting Joe Biden at the White House and the country’s foreign minister, Annalena Baerbock, was in Kyiv, assuring the Ukrainian government of support. Meanwhile, the US and the EU held talks in Washington on how to keep energy supplies flowing to Europe if Russia turned off the flow of natural gas.

After their White House meeting, Biden and Scholz presented a united front in threatening sanctions in the event of a Russian attack. But while Biden was adamant that the Nord Stream 2 gas pipeline from Russia to Germany would be shut down, Scholz would not be so specific.

“If Russia invades – that means tanks or troops crossing the border of Ukraine again – then there will no longer be a Nord Stream 2. We will bring an end to it,” Biden said.

Scholz said that the US and Germany would be “absolutely united” on sanctions, he would not pledge Nord Stream 2 would be closed, insisting on some ambiguity.

“It is part of the process that we do not spell out everything in public, because Russia could understand that there might be even more to come,” the German chancellor said.

Asked about the likelihood of Putin ordering an invasion, Biden replied: “I know that he’s in a position now to be able to invade, almost assuming that the ground is frozen above Kyiv. He has the capacity to do that. What he’s going to do I don’t know.”

The president said that it would be a “gigantic mistake” for Putin to attack, but he advised US civilians to leave Ukraine, saying: “I don’t want them to get caught in the crossfire.”

Josep Borrell, the EU foreign policy chief, led the European delegation to Washington to discuss emergency energy supplies to the continent if the pipeline running through Ukraine was severed.

“We are living by understanding the most dangerous moment for the security in Europe after the end of the cold war,” Borrell said, giving a new estimate of the Russian military buildup.

“Nobody masses 140,000 heavily armed soldiers on the border of a country, at the same time [as questioning] the independence to this country in a way that certainly represents a strong threat,” Borrell said, adding that the Russian troops were not there “to have tea”.

He said that European gas prices were already six to 10 times higher than a year ago, adding urgency to the need to diversify energy sources.

“When Russia halted gas supplies over a dispute with Ukraine in 2009, people died from the cold. And when energy supplies fail, economies falter,” the US secretary of state, Antony Blinken, said.

“We’re determined to prevent that from happening and to mitigate the impact on energy supplies and prices should Russia choose to cut natural gas supplies to Europe more than it already has.”

The US and EU are trying to secure short-notice deliveries of liquified natural gas (LNG) and agreements to pool reserves in the face of limits on the supply for the east, as well as LNG supply and infrastructure constraints that make it very hard to make up the shortfall.

“It’s clear that from the general nature of the comments from secretary Blinken and high commissioner Burrell that they’re still scrambling in terms of their response to this situation,” said Duncan Wood, vice-president for strategy and new initiatives and the Wilson Center thinktank.