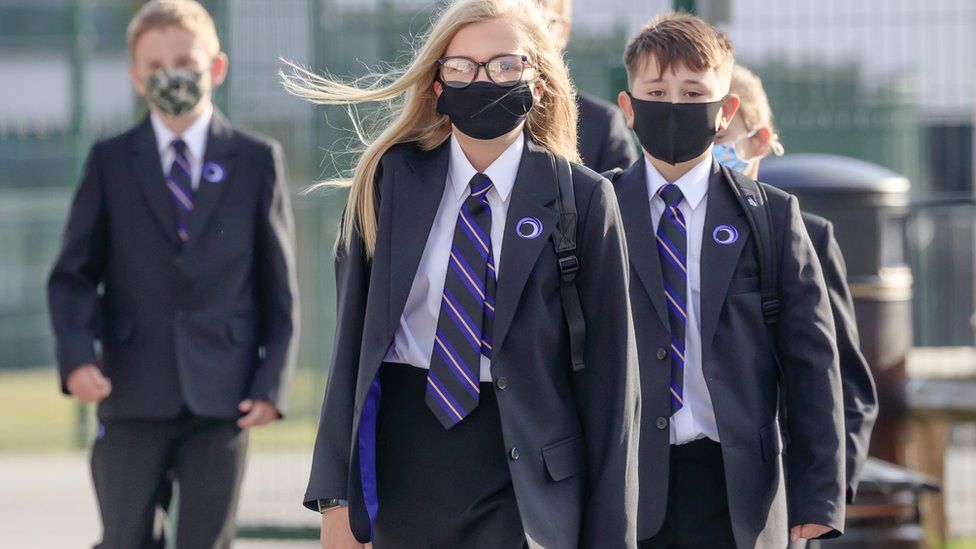 Some schools struggling to stay open as Covid cases rise

Schools in some high infection areas in England are struggling to stay fully open due to rising Covid rates, a head teachers' leader says.

Association of School and College Leaders general secretary Geoff Barton says he knows of schools which have had 25% of staff absent for several weeks.

And there were cases where public health officials were telling schools to switch to remote learning.

Ministers have said they will do everything to keep schools open.

But on Monday, Education Secretary Nadhim Zahawi stopped short of guaranteeing that no schools would be forced to close.

In Scotland, First Minister Nicola Sturgeon has said new measures are needed to stop the spread of Covid, but she is insisting schools will not close early.

In England, the latest data shows 236,000 pupils were out of school for Covid-related reasons on Thursday 9 December.

This is an increase of 13% on the last time the snapshot survey of school attendance was taken, two weeks earlier.

Overall, 2.9% of pupils were out of school last Thursday, compared to 2.6% the last time the figures were published.

Mr Barton told BBC Radio 4's Today Programme: "Listening to the speculation and the news, and certainly the emails I've been getting from members, you are getting some pockets of very severe low attendance, partly young people, partly staff.

"One (school) has emailed me this morning saying 25% of staff have been off for three weeks. You can imagine if you can't then get supply teachers, that becomes very difficult to maintain the quality of education."

He also spoke of a primary school and a secondary in the same academy trust in the Bury St Edmunds area of Suffolk, which has moved to remote learning.

"That wasn't a decision at the whim of a head teacher, that wasn't someone saying; 'We are going to close the school so Christmas can come early'.

"That was on public health advice. What we are getting is a national narrative - quite rightly - that we want to do everything we can to keep young people in school.

"But on the ground in particular areas, such as Bury St Edmunds, public health are saying actually because of infection rates, we are recommending that young people should move to remote learning."

In Anglesey, North Wales, many pupils will end the term with blended learning, as coronavirus levels soar within the county.

On Friday, the island had the highest case rate in Wales. Over the previous seven days, Anglesey's incidence rate had risen to 840.9 per 100,000 people.

And pupils in Denbighshire will end face-to-face lessons on Friday, 17 December and learn from home until term ends officially on 21 December. 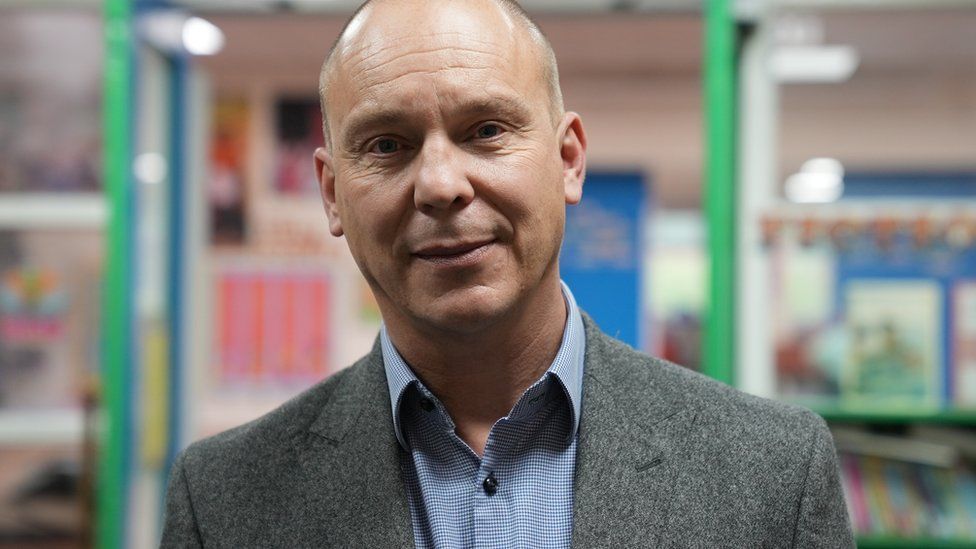 Mongo Sheppard has seen 20% of staff off at times

At Ash Green Community Primary in Halifax, a fifth of staff were absent for Covid-related reasons recently. And this sort of case rate was replicated among the pupils.

In two classes, for two weeks there were only about 60% of the children - due to confirmed or suspected cases, says head teacher Mongo Sheppard

"One of the most difficult things is that you don't know what your staffing structure will be.

"The staffing plan I had in place this morning was different from what I had when I went to bed."

Family support worker at the school, Amber, says she has had a quite a few parents "really frightened" about the new Omicron variant.

Barry Read, head teacher of a school in Essex, says: "We have been hit hard with children and staff off. On top, agencies do not have any staff to cover."

Devon head teacher, Paul Gosling, said it is tough to keep things going, but he is more concerned about January: "If we have more staff falling ill, then it could be difficult to keep the school fully open."

And some parents are concerned about rising case rates and what they see as lack of general mitigations in place to reduce the spread of infection.

A mother from south-west London, Clare, told the BBC how one year-group had 15% off with Covid, and bubble groups had returned in some years.

Mother-of-three, Bernadette Quinn, has one child at St Chad's Catholic Primary in Bishop Auckland, where she says there are fantastic safety procedures in place.

Andy Boyd, who has two children at the school, said he was concerned about the Omicron variant.

"When your kids are in an environment where there are lots of people in a small room, you've got to be concerned haven't you? I know it's a very good school though, and they do all they can to protect them."

Paul Whiteman, general secretary of the National Association of Head Teachers, said schools need clear and consistent advice from central and local government now, so that they can respond appropriately.

"Over the last few days we have heard from our members that there has been a significant jump in Covid cases in schools, amongst both staff and pupils, as the new variant has started to spread. Some have told us that this has been the hardest term of the whole pandemic."

He added: "Everyone is concerned about how this will play out over the next few weeks, and the implications for January. No-one wants to see the sort of disruption to education that we experienced last winter."