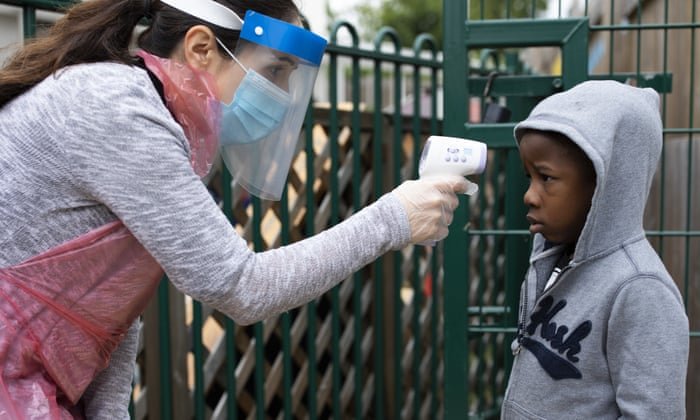 Exclusive: experts say staff and pupils should be screened for virus, possibly by group testing
Scientists have called for routine Covid testing of teachers and pupils alongside a robust test-and-trace system, amid a debate over how to safely reopen schools in England.

On Sunday, the children’s commissioner for England, Anne Longfield, said teachers and pupils should have weekly tests, but Nick Gibb, the schools minister, ruled out the idea, saying instead that those who are symptomatic should be tested.

Now researchers behind a report from Delve, a multidisciplinary group convened by the Royal Society, have said routine testing will be necessary when the majority of children return to school.

Dr Ines Hassan, a researcher in the global health governance programme at the University of Edinburgh and a lead author of the report, said the group were recommending the widespread and regular screening of all staff in schools, including those who are asymptomatic.

“The cost-benefit analysis for the screening of asymptomatic pupils is more complicated, but on balance we recommend this also,” she said.

“We recognise that the health risks to pupils themselves from Covid-19 infection are very low. However, the risks to school staff, parents [or] carers and the wider community are clear, and it is also very important to prevent full or partial school closures or widespread absences arising from transmission within schools, as these will cause further losses of learning, with its associated long-term social and economic effects.”

She said routine testing was important as asymptomatic Covid transmission is estimated to account for 40% of community transmission, and potentially more among school-age children. Young people with coronavirus often have very mild symptoms.

The Delve report also stresses the need for stringent hygiene measures, social distancing and clear guidance for parents on when to keep their child home from school. A robust test-and-trace system and investigation of outbreaks is deemed essential.

However, Devi Sridhar, a professor of global public health at the University of Edinburgh, said there remained debate among experts over whether testing should be widely used in schools, citing the risk of limited testing capacity, a very low coronavirus prevalence and false positives.

The government says daily testing capacity is at nearly 340,000, and 166,000 tests were processed on the latest day for which data was available.

“If you have an area [like the] south-west, where numbers are really low, then I don’t know how much you’ll gain from routine testing,” Sridhar said. “There are other places where you are having substantial transmission – I am thinking the north-west – and so I think there if you want to open schools, you pretty much want to have regular testing in place to catch cases.”

Hassan said work from other countries had shown that group testing – where individuals’ samples are pooled to check for any sign of Covid-19 within a group, followed by tests for each member in the event of a positive result – could provide for regular screening despite supply constraints, though false positives could remain a problem.

“For example, provided the prevalence of Covid-19 infection in the general community in England does not rise too high above the current levels,[group testing algorithms] would enable the testing of all schoolchildren in England once per week, using only approximately 50,000 PCR tests per day, which is well within the UK’s current testing capacity.” She said a cost-benefit analysis should be carried out.

The approach would work well only if there was a low level of spread of Covid-19 in the community. “This [reducing transmission] will be especially important in the winter when, as the children’s commissioner and others have pointed out, flu symptoms can be mistaken for Covid-19 without testing,” she said.

The education secretary, Gavin Williamson, has said a yet-to-be-published study found little transmission of Covid-19 in schools – apparently a reference to a forthcoming report from Public Health England.

A PHE spokesperson said the analysis “appears to show that Sars-CoV-2 infections and outbreaks were uncommon in educational settings during the first month after the easing of national lockdown in England.”

However, some scientists, including Dr William Hanage, a professor of evolution and epidemiology of infectious disease at Harvard University, have said outbreaks or spread in schools could simply be going under the radar.

“When there are statements that there are not outbreaks among schoolchildren, you self-evidently don’t find them if you don’t look for them,” Hanage said, although he said that unlike with flu, younger children might not make a disproportionate contribution to transmission of Covid-19.
Add Comment