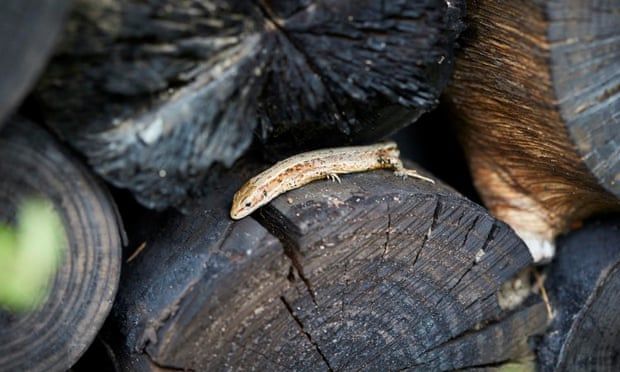 Gardeners at the Yeo Valley Organic display were delighted to find the common brown lizard in pile of logs
Visitors to Chelsea flower show come from all over the country, and range from senior royals to interested gardeners looking for some new plants.

This year, however, there has been a rather special guest – a common brown lizard. Gardeners at the Yeo Valley Organic display were delighted to find him in a pile of logs.

In the past, Chelsea was known as a showcase of perfectly manicured lawns and prize-winning blooms in symmetrical flower beds. But there is now a clear trend towards nature-friendly gardening. This has been somewhat controversial, with veteran gardeners including the Royal Horticultural Society rose expert Charles Quest-Ritson arguing that people do not attend flower shows to see piles of logs and patches of nettles. He believes prizes should not be given for “weeds”.

But Quest-Ritson is in the minority, and this year’s show features multitudes of nature and eco-friendly gardens including a Cop26 garden and a woodland planting supported by Prince Charles, which urges visitors to “plant a tree for the Queen”.

Yeo Valley Organic’s garden is built to attract amphibians and reptiles, as well as pollinators and insects. It seems to have achieved that aim, with the lizard making himself at home in the log pile.

Sarah Mead, who created the Yeo Valley Organic garden, which is a permanent fixture at the company’s farm in Somerset, said there had been a discussion about whether the lizard had hitchhiked from the farm, where materials from the original garden were transported for the mini Chelsea version, or whether had it crawled in as a rare example of a London lizard.

She said: “It’s definitely a common brown lizard – there are lots of them in the West Country so we are sure it came down from Yeo Valley in Somerset among the stone that was transported from the farm, but it’s made itself quite at home here.

“As lizards are cold-blooded, they like the cool stone – it’s Mendip stone they’ve brought up from the dry stone walls on the farm, so a perfect environment for lizards, cool with lots of nooks and crannies. Lizards are just one example of the rich biodiversity at Yeo Valley, where they do everything to encourage wildlife.”

Common lizards are found across the country, but their numbers are declining because of habitat loss. They thrive in grassland and moorland, as well as the edges of woodlands.

The gardeners have enlisted experts from the Wildlife Trusts to help them keep the lizard comfortable at the busy show and teach them more about it.

Features of the Somerset garden recreated at Chelsea include an open perennial meadow with flowering plants and a glade of silver birch. The design also features charred logs used as garden markers and rammed earth walls as boundaries, both highlighting the importance of soil health. The garden is designed to show how to create a beautiful and peaceful space that encourages nature and has soil health in mind.

Tom Massey, who with the help of Mead designed the show garden, said: “The soil plays a pivotal role in our fight to reverse climate change but the world of microscopic activity under our feet is often overlooked. Carbon is the building block of all life and as gardeners we need to be reminded of the role we play in locking carbon into the soil, where it can help sustain life for generations to come. We want to create a beautiful garden that inspires visitors to think about using more sustainable gardening practices.”
Add Comment