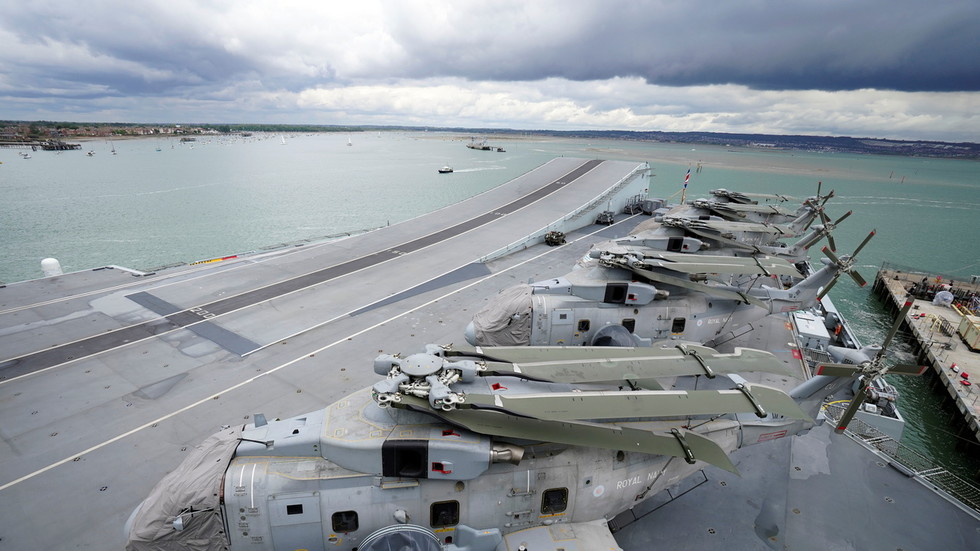 Defence Secretary Ben Wallace touted the UK’s ongoing military build-up while invoking the alleged threat of Russian submarines and ships. Wallace accused Moscow of deliberately targeting Britain with its “operations.”
In an interview with the Telegraph published on Saturday, Wallace praised the new additions to the UK Navy, which he said will put it back on the map as a military powerhouse. In particular, Wallace was referring to the £3 billion aircraft carrier HMS Queen Elizabeth which, along with HMS Prince of Wales, is at the core of the UK Carrier Strike Group.

HMS Queen Elizabeth “is already showing that it’s not just an airfield. It is a convener, it is a projection,” Wallace said, adding that the ship is not headed “to Jersey,” but to Japan on its maiden deployment, ostensibly to project UK power overseas. He appeared to refute reports that the vessel would not sail through the Taiwan Strait to avoid angering Beijing. Noting that the route could change, Wallace said the aircraft carrier would go to the disputed South China Sea, the majority of which is claimed by Beijing, as well as to the equally sensitive waters of the East China Sea.

While these types of maneuvers will not go over well with Beijing, the defence secretary singled out Russia as Britain’s “number one adversary threat.” Wallace, as the Telegraph put it, “attacked Russia for ‘regularly’ sending vessels to Britain,” as well as invoked the 2018 Salisbury scandal.

“We have tried de-escalation, we have tried methods, but at the moment until Russia changes its attitude, it’s quite hard to see where we’re going to go. This is a country that killed someone in Salisbury,” Wallace claimed.

Both former Russian double agent Sergei Skripal and his daughter, who the British government claims were injured by a Russian chemical weapon attack in Salisbury, have recovered. A local woman who came into contact with the nerve agent died in the hospital, while her partner was injured and later recovered. Moscow expressed its deep concern about the incident, while firmly rejecting any allegations of involvement.

Moscow, according to Wallace, has launched “a number of operations, [aimed] deliberately at Britain,” though he did not elaborate on how these purportedly sinister operations have compromised national security.

Beating the drums for the need to counter Moscow, Wallace mentioned the alleged sighting of a Russian Kilo-class submarine in the Irish Sea late last year. The alleged appearance of the sub apparently rattled British military chiefs, as Wallace told the Telegraph he had not seen a Russian submarine in the area “for a very, very long time.”

“It might have been for the first,” he said. The British media, however, is known for going into overdrive over reports of alleged Russian subs roaming the waters along the UK coast.

One such “sighting” gripped the attention of the British media in 2015, when it was reported that a suspected Russian submarine almost capsized a fishing trawler in the Irish Sea. Further investigation, however, determined that it was a British submarine that dragged the trawler by its nets.

In June 2016, the British media declared that the Royal Navy intercepted a Russian “attack” submarine after tracking it off the coast. The Russian Defense Ministry confirmed the passage, noting, however, that the sub had actually surfaced and was travelling with a tugboat to its home base in Crimea with no intention of hiding.

One of the most recent incidents reflecting the growing tensions between Moscow and London involved two Royal Air Force Eurofighter Typhoon jets circling over a Russian submarine off the coast of Scotland in November last year, although it was travelling in neutral waters.
Add Comment