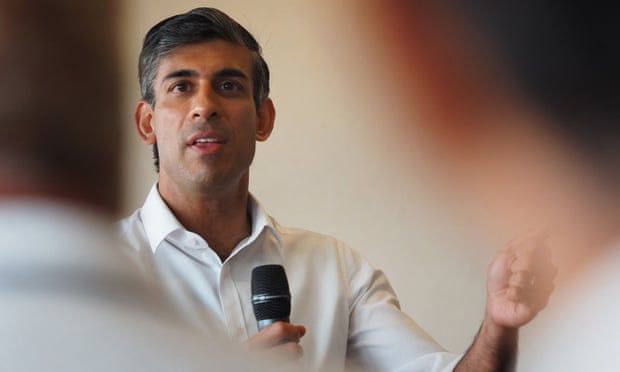 Rishi Sunak rejects claim he has ‘doomster’ attitude to economy

“As chancellor I was very keen to make sure that I started cutting taxes,” Sunak told BBC Radio 4’s Today programme. “What I’ve announced today builds on that, and that’s because I believe in rewarding work and the best way for the government to signal that is to cut people’s income tax.”

The current chancellor, Nadhim Zahawi, announcing his support for Sunak’s rival, Liz Truss, in the Daily Telegraph on Monday, said: “Liz understands that the status quo isn’t an option in times of crisis.

“To quote the excellent economist Sam Bowman, we need a ‘booster’ attitude to the economy, not a ‘doomster’ one, in order to address cost of living woes and the challenges on the world stage. Liz will overturn the stale economic orthodoxy and run our economy in a Conservative way.”

When asked to respond to Zahawi’s remarks, Sunak laughed and said: “As you can tell, I find it rather amusing.” He pointed to his pro-Brexit credentials and economic assistance package during the Covid pandemic, adding: “It’s my opponent in this contest who wants to stick with the failed orthodoxy of having these ultra-low corporation tax rates and, you know what, they don’t work in increasing business investment in this country – we’ve tried it for a decade.

Sunak is under pressure to make inroads into the lead opinion polls suggest Truss enjoys among the Tory members who will decide the next prime minister, as postal ballots begin dropping on Conservative doormats. In the latest YouGov poll, Truss holds the lead among Tory members, while the broader public favour Sunak at 28% to Truss’s 25%, with 47% undecided.

Sunak’s proposed plan to cut income tax to 16p by the end of the next parliament would cost about £6bn a year. As prime minister he said he wanted to cut income tax in a way that was “responsible” by making sure it could be paid for, and is done so alongside economic growth.

“I don’t think embarking on a spree of excessive borrowing at a time when inflation and interest rates are already on a rise would be wise,” he added.

It is the latest policy pledge called “another U-turn” by a Truss campaign source, after Sunak recently promised to cut VAT on energy bills, a policy he rejected in office. And the UK is projected to experience the lowest growth in the G20 – apart from Russia – and have the worst growth in the G7 at about 0.5%.

“The public and Conservative party members can see through these flip-flops and U-turns,” said the source.

When asked to name another country that had raised taxes amid a cost of living squeeze, Sunak said “every country is going to be slightly different in how they deal with it”, while emphasising the UK’s publicly funded healthcare system through tax, and its growing backlogs.

“What she’s suggesting is entirely sticking with the failed orthodoxy of the last 10 years,” Sunak said of Truss’s policy, adding that people were looking at the last months of Boris Johnson’s leadership through rose-tinted spectacles.

Addressing Johnson’s behaviour and citing his resignation along with 60 MPs, Sunak said the government found itself on the “wrong side of an ethical issue”.

In an attempt to regain public momentum, Sunak said: “Today what you saw from me is an exciting, radical but realistic vision to cut taxes over the coming years.”