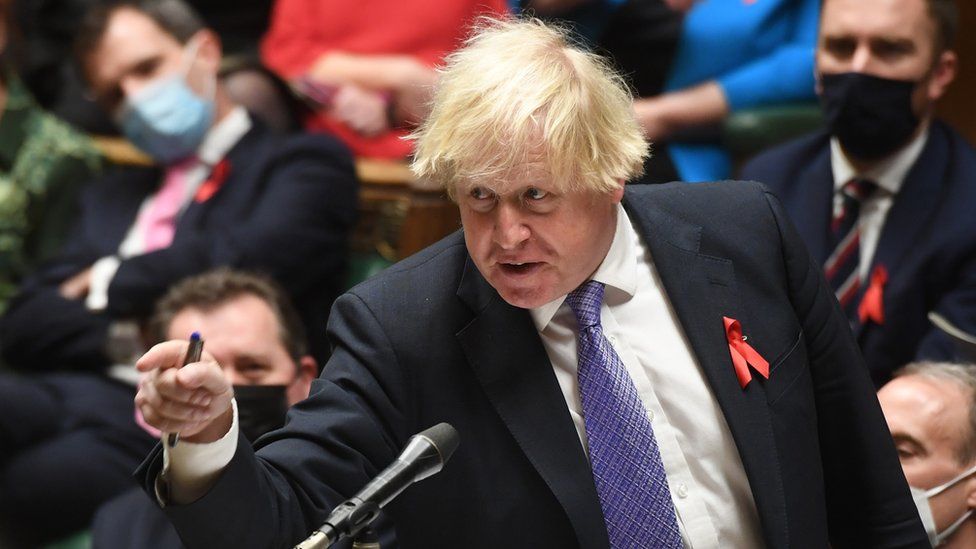 PMQs: PM under fire over No 10 lockdown Christmas parties

Boris Johnson says no Covid rules were broken after reports Christmas parties were held in Downing Street at the height of last year's lockdown.

The BBC has spoken to a source who attended a Downing Street gathering on 18 December, as first reported in the Mirror newspaper.

They said "several dozen" people were at the event, where party games were played and food and drink served.

The PM did not deny parties were held but said "all guidance was followed".

The source at the 18 December gathering said it had gone on past midnight, and that the "mood was down", with concern building about the new Kent variant of coronavirus.

Downing Street was asked for a comment about the source's claim but declined to add to what it had said earlier about all guidelines being followed.

London was placed under Tier 3 lockdown restrictions on 14 December last year, after which time people were not allowed to mix indoors with anyone outside their household or support bubble.

Labour leader Sir Keir Starmer accused the prime minister of hypocrisy for flouting the rules he had ordered the rest of the country to follow.

At Prime Minister's Questions, Sir Keir said: "Does the prime minister really expect the country to believe that while people were banned from seeing their loved ones at Christmas last year, it was fine for him and his friends to throw a boozy party in Downing Street?"

He accused the PM of "taking the British public for fools".

Mr Johnson said all Covid rules had been followed in Downing Street and he took a swipe at Sir Keir's reported disagreements with Labour's deputy leader Angela Rayner.

"Can I recommend to (him) that he does the same with his own Christmas party, which is advertised for 15 December, to which unaccountably he's failed to invite the deputy leader," said the PM.

"The prime minister might be denying it but I've spoken to the Mirror newspaper this morning and they are confirming what happened, and they have legal advice on potential illegality," he said.

"At a time when public health messaging is so vital, how are people possibly expected to trust a prime minister when he thinks it's one rule for him and one rule for everybody else?"

The prime minister said: "He's talking total nonsense. I think he would have been better off, frankly, saying something about the victims of storm Arwen in Scotland."

According to the Mirror, the official No 10 staff Christmas party was cancelled last year, but an unofficial party, which the PM did not attend, took place on 18 December.

The prime minister also gave a speech at a "packed leaving do" for an aide on 27 November, when the country was in its second lockdown and socialising was banned, the paper said.

Mr Johnson has urged people not to cancel their Christmas parties this year, despite the emergence of the Omicron variant of coronavirus.

The PM has urged people to get a booster jab and follow new, tighter restrictions, with face masks once again being required on public transport and in shops in England.

Watch: Keir Starmer asks if No 10 held a Christmas party while the rest of the country was in lockdown
#Boris Johnson  #Coronavirus  #Johnson  #Covid
Add Comment