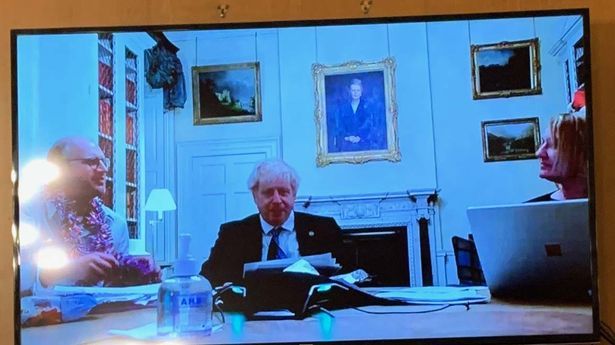 Boris Johnson pictured hosting Number 10 Christmas quiz ‘in breach of Covid laws’, faces more questions over a Downing Street Christmas quiz he hosted while London was under strict Tier 2 "no mixing" restrictions - as staff knocked back Tesco booze.
Boris Johnson has been accused of presiding over a “culture of disregard for the rules” after a picture emerged of him taking part in an online Downing Street quiz flanked by colleagues.

The image, reported by the Sunday Mirror, shows a screen with the sitting in front of a laptop in the No 10 library.

One of his colleagues is draped in tinsel.

Downing Street said the leader had “briefly” taken part “virtually” in the quiz.

The Sunday Mirror reported the event happened on December 15.

The festive event is said to have taken place only three days before an alleged rule-breaking Christmas party in No 10, which is currently being investigated by Cabinet Secretary Simon Case.

Deputy party leader Angela Rayner said: “While the rules said that people shouldn’t have Christmas parties at work and Britons across the country were doing the right thing, Boris Johnson was instead happy to preside over a culture of disregard for the rules at the heart of Government.

“Despite repeated denials of parties in Number 10, it now transpires that there were numerous parties, gatherings and the Prime Minister even took part in a festive quiz.

“Boris Johnson really believes it’s one rule for him, another for everyone else.

“He is a man unfit to lead this country.”

However, Cabinet minister Nadhim Zahawi hit back by saying Labour had taken the “wrong” stance over Boris Johnson’s appearance at the quiz.

The Education Secretary told the BBC’s The Andrew Marr Show: “I think (Sir) Keir Starmer needs to make his mind up.

“One minute he says he does not want to play politics, the next he is, I think, being political and wrong on this.”

He added: “I think in many ways the hype of the past two weeks around parties will quite rightly be investigated by the Cabinet Secretary.

“My email box is full of people thinking that he was sort of at parties with guests and all sorts of things happening.

“Actually, they can now make their mind up when they see this picture of the Prime Minister on a virtual screen, on a Zoom call thanking his team, who are in the building because they have to respond to a national emergency.”
#Boris Johnson  #Johnson  #Covid
Add Comment