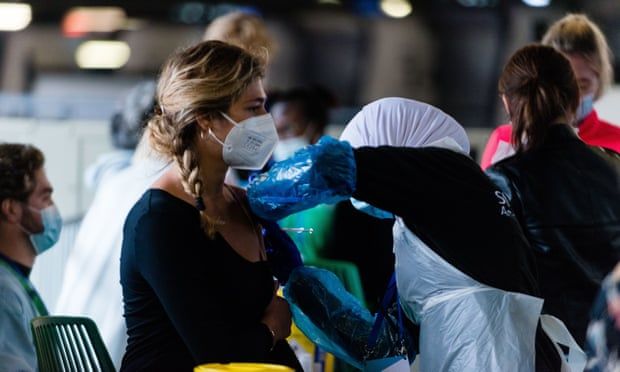 The UK is moving towards a situation where people who have been double-vaccinated could be exempt from quarantine, Public Health England’s chief Covid-19 adviser has said.

Dr Susan Hopkins, one of the key government advisers on the response to the pandemic, said a decision would be made after the results of a study that uses daily lateral flow tests as an alternative to isolation for 10 days after coming into contact with a positive case.

She told the BBC’s Andrew Marr show on Sunday it would give evidence about whether vaccinated people were less likely to transmit the virus. “Then we have an evidence base to derive government policy,” she said.

Hopkins said it was possible it could be used to allow people to travel more freely. “I’m not sure when, but a time in the future I can imagine a situation where we will have alternatives to isolation for people who have two doses of vaccine.”

She said the UK was seeing the impact of vaccination in key infection hotspots, but infections were rising in other areas. 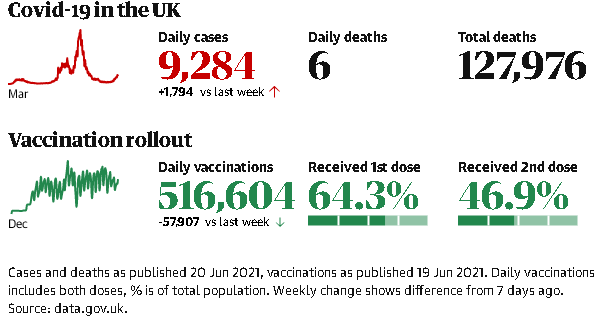 “We are definitely seeing some signals in some areas of cases slowing down. Bolton, for example, has definitely reversed, Blackburn and Darwen has stabilised,” she said. “But there are other parts of the country, particularly in some parts of the north-east, some parts of London, that are still rising quite fast.

“So I think this is not all doing the same thing all over the country, and we’re seeing rises and falls as people go out and get tested and I think we are seeing the impact of vaccination and that is good news.”

Hopkins said the delay of the final stage of lockdown gave more time to vaccinate and could prevent a similar situation to previous waves of the virus. “The extra time to vaccinate more people, get two doses of vaccination in as many people as possible, will hopefully mean that what we’re seeing with this wave won’t look the same as the previous waves that we’ve seen in this country.”

The justice secretary, Robert Buckland, said ministers had not ruled out relaxing restrictions, such as on foreign travel and self-isolation, for those who have received both vaccine doses. “I think experts like Susan Hopkins are absolutely right to remind us the evidence is still developing on double vaccinations,” he said.

“It looks great, it looks really encouraging, we’re trying to be as flexible as we can. We will keep on looking at all these proposals and flexes as appropriate.”