Boris Johnson would win a confidence vote on his leadership, Transport Secretary Grant Shapps has said, as the PM continues to face calls to resign.

Some Tory MPs have told the BBC such a ballot could be triggered this week, but Mr Shapps disagreed.

He also shrugged off crowds booing the PM, saying politicians didn't expect to be "popular all the time".

But Labour leader Sir Keir Starmer said it was a sign voters were "fed up" with the government.

He argued the jeers that greeted the prime minister when he attended a Platinum Jubilee celebration were a response to the government's "inaction" over the cost of living crisis.

However, speaking to the BBC's Sunday Morning programme, Mr Shapps said prime ministers had to make difficult decisions and not everyone would approve.

He also noted that Conservative ministers were booed at the London Olympic games in 2012, but still went on to to win the general election in 2015.

He suggested that at the next general election, voters would judge whether the government had "done a good job as a whole" and that decisions on Brexit, coronavirus and the economy would be what mattered to people.

The transport secretary also insisted Mr Johnson would not lose a confidence vote among his own MPs.

A confidence vote would be triggered if 15% of the Conservative MPs - 54 of them - wrote letters or emails asking for one.

So far 28 Conservative MPs have publicly called on Boris Johnson to step down over revelations of widespread Covid-rule breaking in Downing Street.

However, only MP Sir Graham Brady - chair of the 1922 committee which represents Conservative backbench MPs - knows exactly how many have formally submitted requests for a confidence vote.

Some Conservative MPs have privately told the BBC they believe the threshold for triggering a vote could happen in the coming week.

However, Mr Shapps said he didn't think there would be a vote this week.

Asked if the prime minister could win such a vote he said: "Yes, he will."

All eyes will be on Sir Graham Brady when Parliament returns on Monday.

Only he knows how many letters have been sent in so far. That caveat cannot be overstated; nobody knows for sure what will happen over the next few days.

But, speaking to Conservative MPs this weekend, it seems many rebels think the threshold will be reached within days.

Within government, some concede a vote could be triggered in the coming days "by accident" - not because of a well-organised rebellion from a section of the party, but because enough disparate groups of MPs are fed up enough to submit a no confidence letter.

Others think if a tipping point isn't reached this week, the best opportunity for rebels could come later this month, after the result of two by-elections triggered by Tory MPs standing down from Parliament.

Will June be a moment of truth for the Conservative Party - or another damp squib in the long running leadership psychodrama? Many Tory MPs are weighing that up as the bank holiday draws to a close.

Pressure on Mr Johnson to resign has been increasing since allegations emerged of parties taking place inside Downing Street while coronavirus restrictions were still in place.

During an investigation into rule-breaking events in government buildings, the police issued a total of 126 fines to 83 people.

Mr Johnson himself was fined for attending a birthday party held for him in the Cabinet Room. 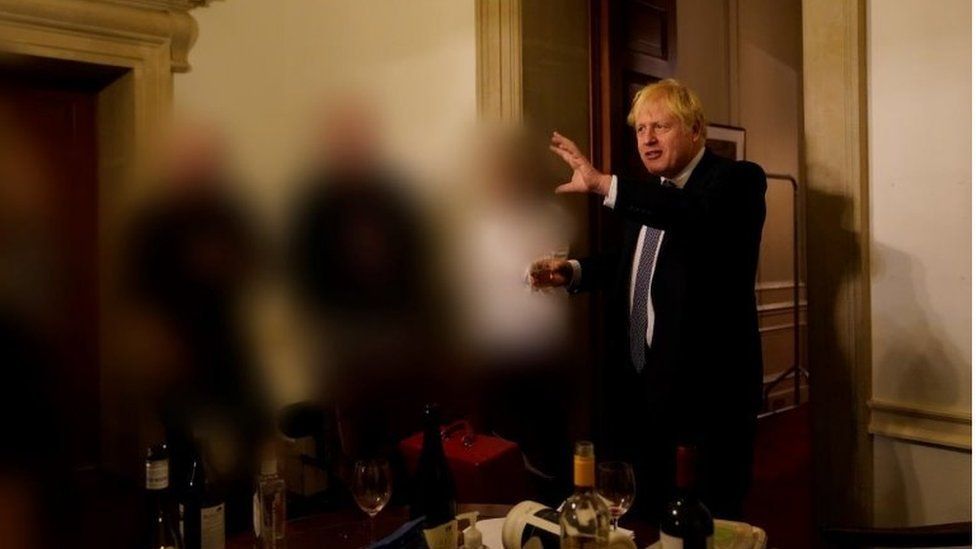 The police's inquiry has been concluded, but the Labour London Mayor Sadiq Khan said their rationale for fining people looks "odd" when taking into consideration photos released in the Sue Gray report.

He suggested a legal challenge of police decisions - launched by the Liberal Democrat politician and former senior police officer Brian Paddick - would ensure the public could see the evidence in relation to each individual case and "resolve" questions about why some people were fined and others not.

Grant Shapps was asked by the BBC's Sophie Raworth if Boris Johnson would win a confidence vote
Watch: There were boos and cheers for the PM as he arrived at the Jubilee thanksgiving service with his wife Carrie
#Boris Johnson  #Coronavirus  #Johnson  #Covid
Add Comment