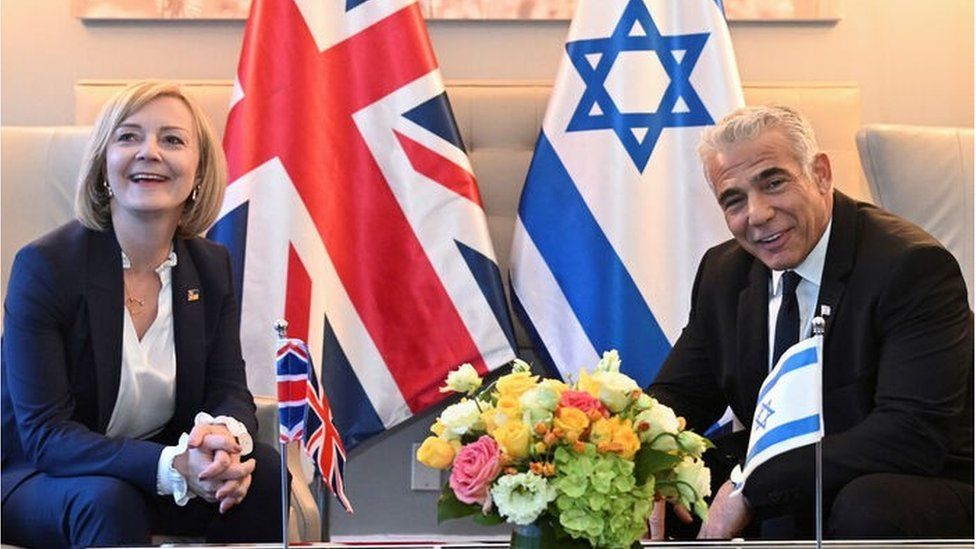 The Palestinians have called a proposal by the UK to move its embassy from Tel Aviv to Jerusalem a "blatant violation of international law".

UK PM Liz Truss is said to have told her Israeli counterpart, Yair Lapid, about the review while at the UN.

Such a move would be highly controversial. The opening of the US embassy in Jerusalem in 2018 was met with outrage across the Arab world.

Mr Lapid tweeted his thanks to Ms Truss for "positively considering" it.

He described Ms Truss as his "good friend", writing in Hebrew after the pair met on the fringes of the UN General Assembly in New York.

Downing Street has not given any indication of timing but has confirmed that a review is under way.

British officials said they would not speculate on the outcome, adding that Ms Truss was aware of the sensitivity and importance of the location of the British embassy in Israel.

The status of Jerusalem is one of the thorniest issues in the decades-old Israel-Palestinian conflict.

Israel sees the entire city as its eternal, undivided capital while Palestinians claim the eastern part as the capital of their hoped-for future state.

East Jerusalem, along with the West Bank and Gaza Strip, were captured by Israel from Jordan and Egypt in the 1967 Middle East war and have since been viewed internationally as occupied Palestinian territory.

On Twitter, the Palestinian ambassador to the UK, Husam Zomlot, wrote that it was "extremely unfortunate" that Ms Truss had used her first appearance at the UN as prime minister to "commit to potentially breaking international law".

He said any embassy move would be "a blatant violation" of "the UK's historic responsibilities", undermining the two-state solution of an independent Palestinian state alongside Israel to the Israel-Palestinian conflict.

"Such promise is immoral, illegal and irresponsible!" he said.

Up until now, the UK - like most other countries - has kept its embassy in Tel Aviv, rather than in bitterly contested Jerusalem, holding that it should only move to the holy city after a final peace deal between Israel and the Palestinians.

Britain has a consulate in East Jerusalem.

Ms Truss reportedly raised the idea of relocating the embassy during the recent Conservative leadership campaign.

When US President Donald Trump recognised Jerusalem as Israel's capital - fulfilling a campaign promise - it brought international condemnation. It also led to a flare-up in violence in which dozens of Palestinians were killed by Israeli forces.

At the time, the British PM, Theresa May, criticised the US action.

The only countries to have since followed Mr Trump's example by moving their embassies from Tel Aviv to Jerusalem have been Honduras, Guatemala and Kosovo.

While US President Joe Biden has renewed Washington's commitment to a two-state solution, he has not gone back on the recognition of Jerusalem as Israel's capital.