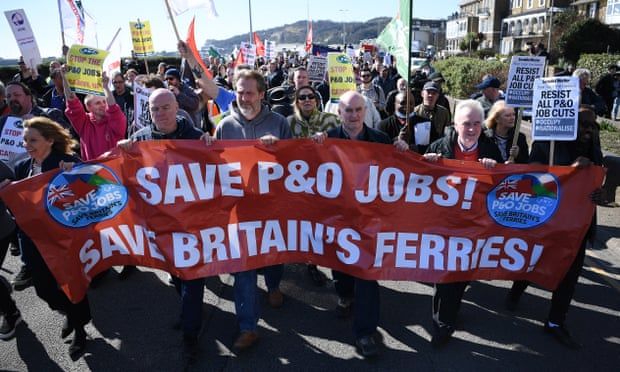 Labour had called on the government to step in and halt any crossings, as ministers confirmed that all government contracts with the company were being reviewed.

The Conservative party co-chair Oliver Dowden said P&O Ferries and its owner, DP World, “should be in no doubt the government is considering very closely its relationship with them”.

“All of us feel, frankly, a revulsion at the kind of sharp practices from P&O. There has been a complete lack of engagement, a lack of prior notice or indeed any empathy whatsoever for the workers,” he told Times Radio.

It came as the Sunday Times newspaper said it received a leaked memo apparently written by a senior Whitehall official that tried to “justify” the mass redundancies, stating that “without these decisions, an estimated 2,200 staff would likely lose their jobs”.

The memo, which is claimed to have been sent before 800 P&O staff were told of their jobs being lost on Thursday, adds the changes “will align them with other companies in the market who have undertaken a large reduction in staff previously”.

The newspaper said it was “widely shared across government” and recipients included the prime minister’s private office while the transport secretary, Grant Shapps, is understood to have received a copy.

After reports the firm intended to resume the Liverpool-Dublin route with its Norbank ship on Saturday, the shadow transport secretary, Louise Haigh, said: “P&O must not be allowed to sail today with replacement agency labour for loyal workers unjustly sacked this week. Strong words from the government are meaningless – they must step in and act.”

After at least one of the company’s ferries was reported to have left Liverpool on Saturday morning, the Labour MP for Sefton Central, Bill Esterson, tweeted: “Looks like one of the P&O ships has left for Dublin. So who is the crew?”

Union calls for a boycott of P&O were also backed by the Labour MP for East Hull, Karl Turner, who said he had for years been raising concerns about legal loopholes that meant the national minimum wage did not apply on international ferry routes, and called on the government to do more to punish the company for its actions.

“The government should be telling every single person to boycott P&O Ferries. That should be the message because we should not be allowing a pariah business to take advantage of British workers,” he said on the BBC’s Today programme, adding they should demand back the £10m furlough money provided to the company during the pandemic.

Labour has also urged the government to publish the legal advice it received on whether P&O broke the law by making so many roles redundant without consultation, and asked if ministers were able to reverse the decision.

“We are demanding the prime minister grants access to the legal advice the Department for Transport received on whether P&O Ferry’s actions constitute a breach of the law, and whether there are legal levers to get the decision reversed,” said Keir Starmer. “Full transparency is vital to prevent anyone else from being subjected to this appalling behaviour.”

In a new statement on Friday, P&O Ferries said its decision was a “last resort” after concluding “the business wouldn’t survive without fundamentally changed crewing arrangements”.

The transport secretary, Grant Shapps, said he had instructed the Maritime and Coastguard Agency (MCA) to carry out inspections of all P&O vessels before they returned to sea to check the new crews the company had “rushed through” were safe.

Protesters were expected to march on the Tory party conference on Saturday for another day of demonstrations against the move, after protests at ports in London, Liverpool, Larne, Hull and Dover on Friday.

The TUC general secretary, Frances O’Grady, said: “If the company has breached the law it must face severe consequences – not just a slap on the wrist.

“What happened at P&O can never, ever be allowed to happen again. Ministers must urgently bring forward an employment bill to stop workers from being treated like disposable labour. The time for excuses is over.”
Add Comment