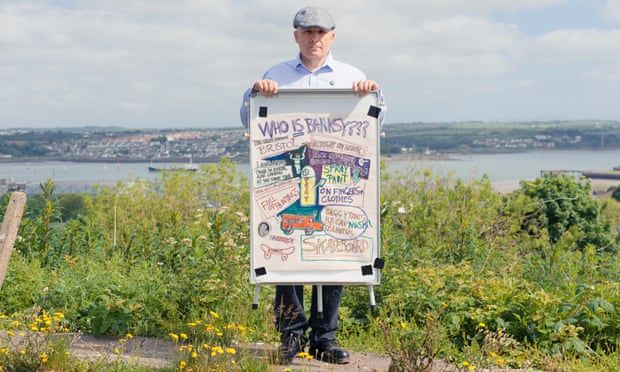 Mr Banksy, I presume: the councillor who quit over claims he has a secret

When rumours went viral, Billy Gannon had ‘an existential crisis’, joining a list of those denying being the enigmatic artist

To be clear, Billy Gannon is not Banksy. Or at least – that’s what he says.

“The problem I have is that when I say to people, ‘I am not Banksy,’ I can see this look in their eyes, and they say, ‘That’s what Banksy would say,’” says the 58-year-old from Pembroke Dock, west Wales. “Every time I deny I am Banksy … a significant number of people in the town [decide] that I am, or could possibly be, Banksy.”

Not being Banksy may appear unremarkable to many people, the overwhelming majority of whom are also not the elusive street artist and activist. But in Gannon’s case his status as Not Banksy plunged him this week into what he describes as “an existential crisis”, after he resigned from his post as a councillor in the small Pembrokeshire town, in response to allegations spread by email and on social media that he has lied about his identity, is 10 years younger than he claims – and is, in fact, Banksy.

The rumours, which Gannon believes were started maliciously by a rival council candidate, were “undermining my ability to do the work of councillor” and tarnishing the town council’s reputation, he wrote in an email to the clerk earlier this week. As a result, he has stepped down as an independent member for Bufferland ward. 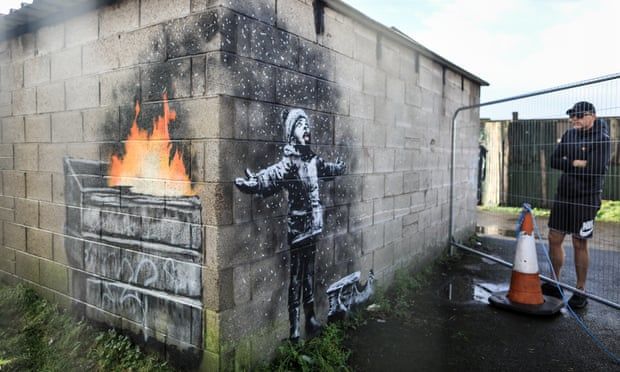 A Banksy artwork that appeared on a garage wall in Port Talbot in 2018.

Watching reports of his resignation, and the reasons for it, spread virally in Britain and far beyond over the past few days has been deeply strange, he says. “You know that Kafka novel, I think it’s The Metamorphosis, where a guy goes to bed as a human being and wakes up as a six foot tall beetle?

For now, he has taken to wearing a small, black badge on his lapel that reads: “I am NOT Banksy.” “I am not Banksy,” he says, “and I have the badge to prove it.”

Part of the problem, Gannon acknowledges, is that there is just enough in his own background to make the rumours at least plausible. An artist himself with a particular interest in community projects, he speaks passionately about working with ordinary people and says he believes art should be available to all.

Originally from Warrington, he moved to Pembroke Dock with his wife and son in 2013, after what he describes as “quite a wild life, living out of the backs of vans and spraying on walls” – though he says he was involved more in legal street art than graffiti. “All the things that Banksy did, I did as well about 10 years earlier, which is why this allegation that I’m Banksy has so much weight to it. I was in the same place doing the same thing at the same time.

“But that doesn’t make me Banksy.”

Plenty of people might consider it a compliment to be compared to the wildly popular artist, and Gannon, as it happens, is among them. “Here’s the thing: I absolutely love him. Or him/her/them. The guy’s a hero. They’re heroes. Just for [Banksy’s interventions in Palestine] alone, he’ll always have a special place in my heart.” He also admires accessibility the artist’s work – “it’s for everyone”.

So why did he feel the need to resign? A spate of vandalism in a local park, just as a number of social media posts and emails appeared accusing Gannon of deceit and a history of illegal graffiti, made him feel his position was untenable, he says. 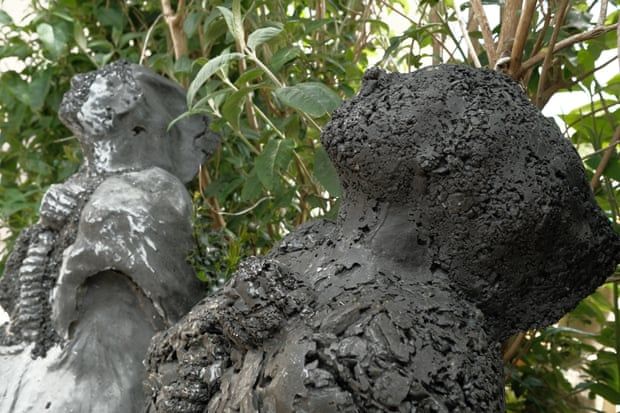 Sculpture of Louisa Calderon, who was the victim of racist torture in the 18th century, a work that William Gannon has done in his own name.

“Having a councillor who has lied about his date of birth, and is operating under a false name – that would be disastrous for the reputation of the town. And suddenly the only thing we would be talking about in Pembroke Dock would not be how to make people’s lives better, we’d just be talking about how you have an impostor sitting on the town council.” The Guardian has seen the original hostile messages and been shown evidence confirming Gannon’s age and identity.

The story may have begun in malice but it is also, the former councillor says, “so ridiculous. It’s just silly.” And so, in response, he has made a number of his “I am NOT Banksy” badges available to others through his website, with the following statement:

Also not Banksy. Or are they?

A member of the band Massive Attack who has long been identified as a possible Banksy alter ego. Del Naja grew up in Bristol, where Banksy’s earliest work appeared, and was a street artist before founding the band. An analysis in 2016 of Massive Attack international tour dates claimed to show that they coincided with Banksy murals appearing, and suggested Del Naja was responsible, perhaps as part of a group. He has called the claim “greatly exaggerated”.

“Neil Buchanan ISN’T Banksy”, the former Children’s TV presenter insisted in 2020, after a Twitter rumour led to a torrent of inquiries. The presenter of Art Attack had been known for creating large-scale outdoor artworks, and there were claims on social media that Banksy artworks had appeared to coincide with gigs by Buchanan’s former heavy metal band Marseille.

A Bristol artist who was first named in 2008 as a possible candidate by the Mail on Sunday, based in part on a photograph said to depict the graffiti artist and claims Gunningham had been particularly good at art in school. Scientists at Queen Mary University in London claimed in 2016 to have used “geoprofiling” to link the two, but the claims have never been confirmed.

An anonymous “forensics expert” claimed in 2018 to have identified the artist and Gorillaz co-founder Jamie Hewlett as Banksy, based on information that showed Hewlett was associated with companies linked to the graffiti artist, while Banksy’s artwork has appeared in Gorillaz videos. A denial by Banksy’s spokesperson notably misspelled the name Hewlett.

Guetta’s emergence as graffiti artist Mr Brainwash was first documented in Banksy’s 2010 Oscar-nominated movie Exit Through the Gift Shop, which led many viewers to wonder if he was Banksy himself. “When you say you are [Banksy] they say, ‘no you’re not’. And when you say, ‘I’m not,’ they say, ‘Yeah, sure you are.’ So you know what, fuck it,” he said last year.