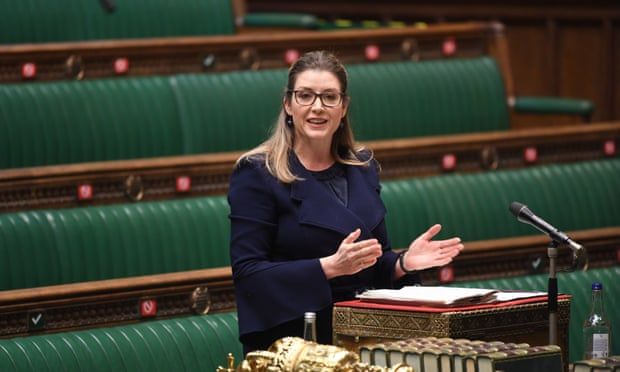 However, the move to give the attorney general, Suella Braverman, six months’ paid leave drew accusations of double standards during the parliamentary debate, including over the omission of any reference to paternity leave and the failure to extend similar benefits to backbenchers.

Some MPs also protested over the language in the bill, which refers to a person, rather than a woman, which minister Penny Mordaunt said was “not a policy decision around language”.

Mordaunt said the bill put an end to the “wholly unacceptable” situation of a minister having to resign in order to take leave. Braverman is expecting her baby at the end of February.

Giving her backing to the bill, Caroline Nokes, the Conservative chair of the women and equalities select committee, said it was a “mess” that the issues had not been resolved in a more considered matter.

“What a mess that it is well into the 21st century before we have had to face this situation. And why oh why did it cross nobody’s mind that we might need to address this prior to it having the urgency it now does?” she said. “Is it really that unthinkable that a secretary of state or one of the law officers could become, heavens above, pregnant?”

Nokes said the legislation does not go far enough as it fails to address adoption leave or shared parental leave, noting that she wanted reassurances that “swift” action would follow to deal with remaining issues.

Two pregnant backbench MPs spoke in the debate raising the disparity. Labour MP Feryal Clark, who is due to give birth at the end of April, said she was “scared about taking informal maternity leave”.

“I’m scared that it will be used against me politically, and most depressing of all, I’m scared that beneath the warm words of ‘good luck’ and ‘congratulations’ some members will take a dim view of my taking of maternity leave at all,” Clark said.

Stella Creasy, who is pregnant with her second child, has said she will consider legal action unless similar benefits are extended to backbenchers. “I want to be clear with the government: they have made some commitments today, but like the Suffragettes said, this has got to be deeds, not words.

“I am early on in my pregnancy, I shouldn’t have to reveal that, but I am doing that today to be very clear to pregnant women around this country that they will find champions in this place, that it is not enough that we only act for that small group of women at the top of our society. We must act for every woman to be able to have maternity leave.”

Labour MP and mother of the house, Harriet Harman, said the bill should be an impetus to address low maternity pay. “The government have done the right thing by the attorney general and women cabinet ministers. Now they need to put right the completely wrong situation for the rest of the women in the country and what they face,” she said.

“Statutory maternity pay is only £152 per week and at that it is less than half of what you would get on the national minimum wage – so her income is clobbered just when she needs to be spending more. Honestly, if men had babies, do we really think that maternity pay would be so insultingly low? Not a chance.”

Some MPs, including Labour’s Tonia Antoniazzi, the Conservatives Sir Edward Leigh and the SNP’s Joanna Cherry, said they did not agree with the language in the bill.

Antoniazzi said: “The fact that it refers to a person who is pregnant and doesn’t mention ‘woman’, ‘women’, ‘she’ at any point is totally at odds with all other maternity rights and protection legislation.”

Mordaunt, the paymaster general, said it had been a “particular drafting issue” but said: “I do understand how offensive the word ‘person’ or ‘persons’ can be in this context and I hope that we can make some changes, if not to the legislation, but to the explanatory notes.”

The ministerial and other maternity allowances bill cleared the House of Commons after receiving an unopposed third reading. It will now undergo further scrutiny in the House of Lords.
Add Comment