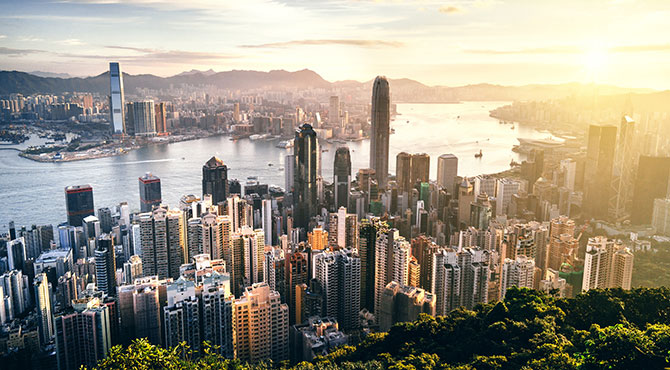 Almost 90,000 Hongkongers applied to come to the UK between February and the end of September under under the BNO - British National (Overseas) - visa scheme.
But senior Conservative MPs are now pressing the government to amend the scheme so that more young people from the former British colony can apply for the BNO visa.

The scheme was introduced on January 31 this year as a government response to Beijing's imposition of strict national security laws on Hong Kong in a bid to end mass, pro-democracy demonstrations.

Those currently eligible for the visa, which entitles successful applicants to come to live and work in the UK for five years and then apply for citizenship, are an estimated 2.9 million who were living in Hong Kong at the time of the 1997 handover to Chinese rule, plus another 2.3 million of their dependants.

Figures from the Home Office last week showed that, to the end of September, 88,800 applications had been made under the scheme, with more than 80 per cent already approved.

However, the total for the third quarter of the year was about 20 per cent down on Q2, mainly because of the opening of new migration routes to Australia and Canada, according to the South China Morning Post, which also reported that about 40,000 families were estimated to have left Hong Kong this year.

Even so, there have been long-running concerns that people born after 1997 and whose parents are entitled to BNO status, were being "left behind" because their parents had opted to remain in Hong Kong.

Now an amendment to the government's Borders Bill is being proposed by Damian Green, a former Tory immigration minister, to extend the visa scheme to Hongkongers aged 18-25 and with at least one parent eligible to BNO status.

If passed, the young people would be entitled to come to the UK on their own, without having to be accompanied by a BNO parent. At present, such individuals' only route to the UK is to claim asylum.

At least a dozen Conservative MPs are supporting the amendment, including former party leader Iain Duncan Smith, and chairman of the House of Commons foreign affairs select committee, Tom Tugendhat.“The BNO scheme is a great success story which the government should take credit for, but sadly the current scheme does not cover many of the brave young activists in Hong Kong,” said Mr Duncan Smith.

“Many of these pro-democracy campaigners are in danger of being prosecuted by the intolerant Chinese Communist party and its representatives in Hong Kong. I urge the government to think carefully about helping these people, too.”

Mr Green added: “My amendment would mandate a simple rule change that would ensure our immigration system offers a lifeline to the young people who need it most.

“If we do not rationalise the policy in this way, many of these people will inevitably end up claiming asylum because they face political prosecution.”
Add Comment