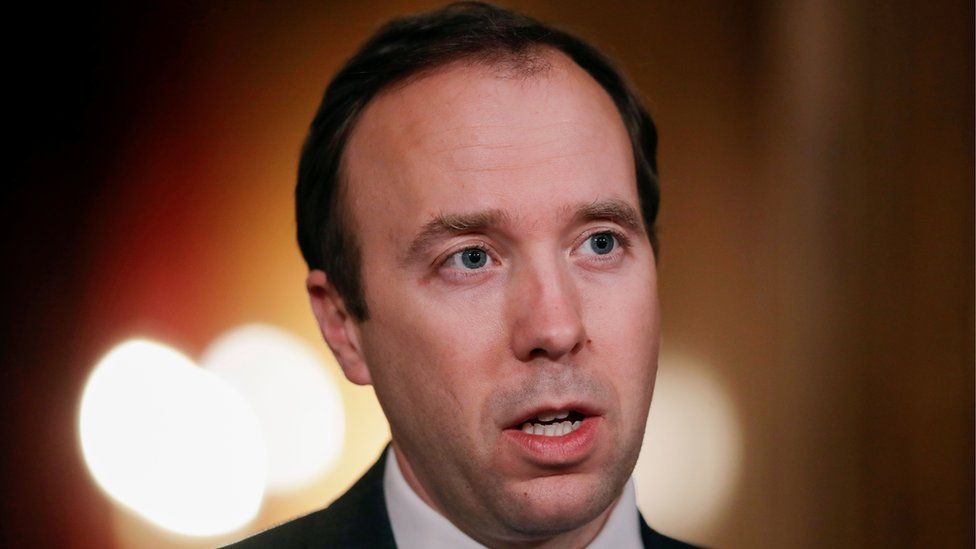 In March, he declared he had acquired more than 15% of Topwood Ltd, which was granted the approved status in 2019.

The firm, which specialises in the secure storage, shredding and scanning of documents, also won £300,000 of business from NHS Wales this year.

A government spokesman said there had been no conflict of interest.

He also said the health secretary had acted "entirely properly".

But Labour said there was "cronyism at the heart of this government" and the party's shadow health secretary Jonathan Ashworth has asked the head of the civil service to investigate whether Mr Hancock breached the ministerial code.

In March this year, Mr Hancock declared in the MPs' register of interests that he had acquired more than 15% of the shares in Topwood, under a "delegated management arrangement".

Public contract records show that the company was awarded a place in the Shared Business Services framework as a potential supplier for NHS local trusts in 2019, the year after Mr Hancock became health secretary.

The MPs' register did not mention that his sister Emily Gilruth - involved in the firm since its foundation in 2002 - owns a larger portion of the shares and is a director, or that Topwood has links to the NHS - as first reported by the Guido Fawkes blog and Health Service Journal.

But he said he was "not suggesting" the health secretary had broken any rules.

But a government spokesperson said: "Mr Hancock has acted entirely properly in these circumstances. All declarations of interest have been made in accordance with the ministerial code. Ministers have no involvement in the awarding of these contracts, and no conflict of interest arises."

A Department of Health source said Mr Hancock had discussed the fact he was to be gifted shares in the firm with civil servants before he accepted them.

They ruled that if any conflicts of interest were to arise, they could be handled in line with the ministerial code, the rulebook setting out the standards of conduct for ministers.

This states that ministers should declare interests of close family if they believe they might give rise to a conflict.

When he was secretary of state for digital, culture, media and sport in 2017, he did declare that his brother Chris Hancock was chief executive of an investment crowdfunding company called Crowd2Fund.

The Department of Health said Mr Hancock had no active role in running Topwood.

As health secretary for England, he does not have responsibility for NHS Wales, which awarded contracts to Topwood earlier this year.

Mr Hancock has not yet commented.