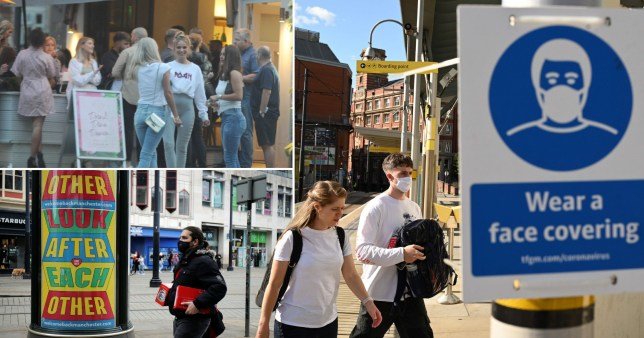 The coronavirus outbreak in Greater Manchester should be a warning to the ‘complacent white middle class’ that Covid-19 is not just spreading in ethnic minority households, one of the region’s health chiefs has said.

Eleanor Roaf, the director of public health in Trafford, said 80% of its infections in the last week were in the white community.

A major incident was declared in Greater Manchester on Sunday after a rise in new cases across ‘multiple localities’. Much of the coverage has focused on Oldham, where officials said two-thirds of infections were in the town’s Pakistani and Bangladeshi communities.

Roaf said this was not the case in Trafford, one of the wealthiest and whitest of Greater Manchester’s 10 boroughs.

She told the Guardian: ‘We are continuing to see more cases than we would like and what’s worrying is our positivity rate is going up. That is the number of people per hundred that test positive. What you want to try to do is keep that to about 1%. We are at 3% at the moment.

‘The Trafford narrative is that it is a very white outbreak in Trafford. In other places the narrative is quite different. One of the anxieties is that we don’t end up with a complacent white middle class thinking it’s not affecting them because they think it’s about overcrowding in ethnic minority families.’

Eighty-one people tested positive in Trafford in the last week of July – the third biggest number in Greater Manchester, after Manchester (178) and Oldham (130).

Ninety-two per cent of cases had ethnicity recorded and of those 80% were white.

Ms Roaf said many of the cases in Trafford were among 17 to 22 year olds but now more people in their 30s, 40s and 50s are testing positive. She suspects young people going out to pubs and bars are getting infected and then passing it on to their parents.

She said blaming the spread on deprived, over crowded areas was damaging because ‘anyone can get it’ – highlighting a rise in cases in Altringham and Hale, where footballers and actors live.

Nine of the Greater Manchester’s 10 local authorities are in the top 20 areas with the highest coronavirus infection rates in England, according to NHS data for the week to Friday 31 July.

On Sunday, a major incident was declared, giving authorities the power to close public parks, pubs and specific places of work if there is deemed to be a ‘serious and imminent threat to public health’ from Covid-19.

Health chiefs had already banned all 2.8 million residents in the region from meeting anyone from different households indoors.

The surprise local lockdown, which also applies to areas of West Yorkshire and Lancashire, was criticised for being announced with just three hours notice on Thursday, the night before the Muslim festival Eid al-Adha began.

A Conservative MP came under fire last week for blaming immigrants, Muslims and ethnic minorities on the north-west’s spike in coronavirus cases.

Craig Whittaker, MP for West Yorkshire’s Calder Valley, said the ‘vast majority’ of people breaking social distancing rules were from the BAME community and that minorities were not taking the pandemic seriously.

Critics were quick to point out photos of crowds of people, many of whom are white, failing to follow social distancing guidelines at pubs and on beaches. Others claimed areas with the highest rates of infection had predominately white populations.