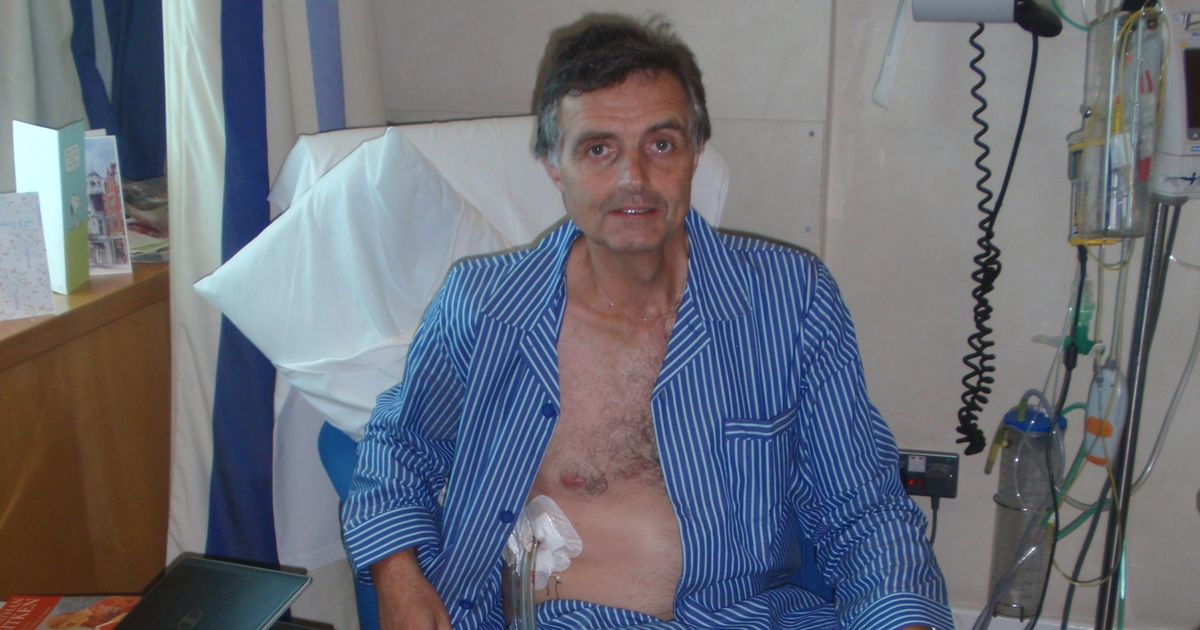 A banker from Kensington has defied all the odds after he was diagnosed with an aggressive form of terminal cancer and told he had just months to live - seven years ago.

Mick May was told in 2013, only aged 54, that he had contracted mesothelioma - a form of lung cancer linked to asbestos exposure.

However, after shocking doctors and surviving the cancer, Mick is now releasing a book seven years on titled, Cancer and Pisces , detailing his remarkable story of survival.

Mick visited his GP in 2013 due to feeling unwell and out of breath.

An X-ray then revealed the extent of his illness and doctors told him he only had months to live with no hope of a cure for his condition.

Mick, a dad-of-six, was at a loss at how he would tell his children the heartbreaking news.

Mick with his six children and wife in 2018

"The realisation following diagnosis comes in a cascade of emotion rather than a bombshell and when the doctor suggested my wife join us, saying something like ‘it’s often better on this sort of occasion’, you think 'good lord, this must really be serious'," Mick said.

He added: “The doctor didn’t beat about the bush and we deduced this was a lung cancer and a serious one.

"Each sentence of his was like a blow to my stomach. You anticipate even more devastating truths to come."

Even though he supposedly he only had a matter of months to live, Mick was still persistent to find out how and where he'd been in contact with the asbestos that caused his cancer.

Although Mick's workplace had undergone extensive workplace in the 1980s which he later found out had exposed him to asbestos, numerous lawyers discouraged him from officially taking his case forward.

However, after coming across a legal asbestos specialist in Joanne Jefferies of Irwin Mitchell, Mick decided to launch an investigation into his asbestos exposure.

“Mesothelioma is a horrible disease and its widespread use in decades previously has left behind a terrible legacy affecting far too many people," Joanne said.

She added: "Mick’s diagnosis was particularly difficult for him to accept given the relatively young age at which he developed the cancer."

With the help of Joanne and her team at Irwin Mitchell, they were able to reach a settlement that brought justice to Mick and proved that his exposure to asbestos was indeed at the investment bank he had joined as a 22-year-old.

With this settlement, Mick was able to afford life saving treatment that defied the devastating prognosis he was originally given.

He was the first mesothelioma patient to receive skin cancer drug, Vismodegib, to treat his condition.

Mick is making sure he lives life to the full

Before his diagnosis, Mick had a life goal of reaching his 60th birthday, a dream that seemed bleak after the life changing diagnosis.

But Mick defied doctors not once but twice when the cancer returned in 2016 to reach his 60th birthday two years later and celebrate with his family.

And now he's releasing his first book detailing his story of survival. It was Mick's friend and cabinet minister, Jonathan Aitken that encouraged him to write the book which will be available on Amazon and all major outlets from August 20.

"Miraculous is a word vastly overused and risks being cheapened in the process, but when you have been called a medical miracle and a miracle man several times to your face, you are forced to ponder a little," Mick said.

Mick, who also runs a social enterprise, Blue Sky, which has helped employ more than 2,000 ex-offenders, will also donate all the proceeds from the book to Cancer Research UK.