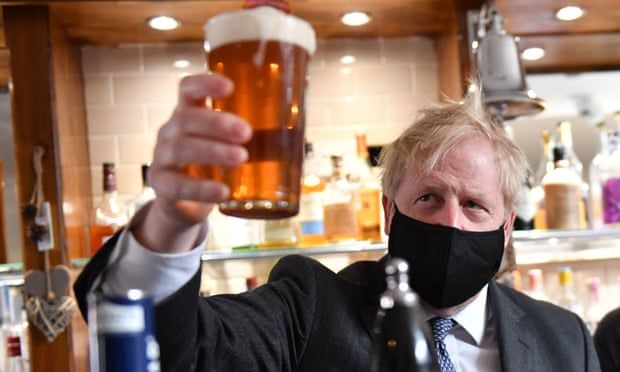 New year message makes no mention of Northern Ireland amid boasts of ‘cutting back on EU red tape’
Boris Johnson has named returning the crown stamps to pint glasses and scrapping a ban on selling goods in pounds and ounces on his list of the “key successes” of Brexit this year.

The prime minister set out his views on the opportunities created by Brexit in 2021 a year after the signing of the UK-EU trade and cooperation agreement.

However, he made no mention of Northern Ireland in his new year’s message about Brexit, where there are still huge trade problems with the operation of the agreement and ongoing talks with the EU about how to proceed. The prime minister also omitted mention of the resignation of David Frost, the Tory peer overseeing Brexit.

Frost is leaving the government after frustrations over Brexit negotiations and broader concerns over the government’s Covid policies and tax increases. His brief will be taken over by Liz Truss, the foreign secretary.

In his anniversary message, Johnson said the UK had “used Brexit freedoms” to create a new immigration system and to strike new trade deals around the world with countries such as Australia.

Johnson also claimed Brexit had helped secure the vaccine rollout, although some have challenged that claim.

On cutting red tape, the prime minister listed ending VAT on sanitary products, simplifying complex EU alcohol duty rates, and forging ahead to remove the ban on selling in pounds and ounces as well as restoring the crown stamp on to the side of pint glasses as successes during the year.

“But that’s not all. From simplifying the EU’s mind-bogglingly complex beer and wine duties to proudly restoring the crown stamp on to the side of pint glasses, we’re cutting back on EU red tape and bureaucracy and restoring common sense to our rulebook.”

Looking ahead to 2022, Johnson pledged the government would go “further and faster” to maximise the opportunities of Brexit.

He said officials were reviewing thousands of individual EU regulations automatically kept on the statute book after Brexit with a view to repealing those that do not act in the best interests of people and businesses.

Johnson also highlighted reviews of the regulatory regimes around artificial intelligence, self-driving vehicles, data rights, genetically modified food and medical devices as areas where the UK could deviate from the EU.

“The job isn’t finished and we must keep up the momentum. In the year ahead my government will go further and faster to deliver on the promise of Brexit and take advantage of the enormous potential that our new freedoms bring,” he said.

Truss held talks with her EU counterpart, Maroš Šefčovič, in the week before Christmas amid renewed calls to rip up the controversial Northern Ireland protocol.

The cabinet minister, who is also the foreign secretary, said she wanted to negotiate “a comprehensive solution” to the agreement, which requires post-Brexit checks on goods arriving in Northern Ireland from Great Britain.
#Boris Johnson  #Johnson  #vaccine  #Covid
Add Comment