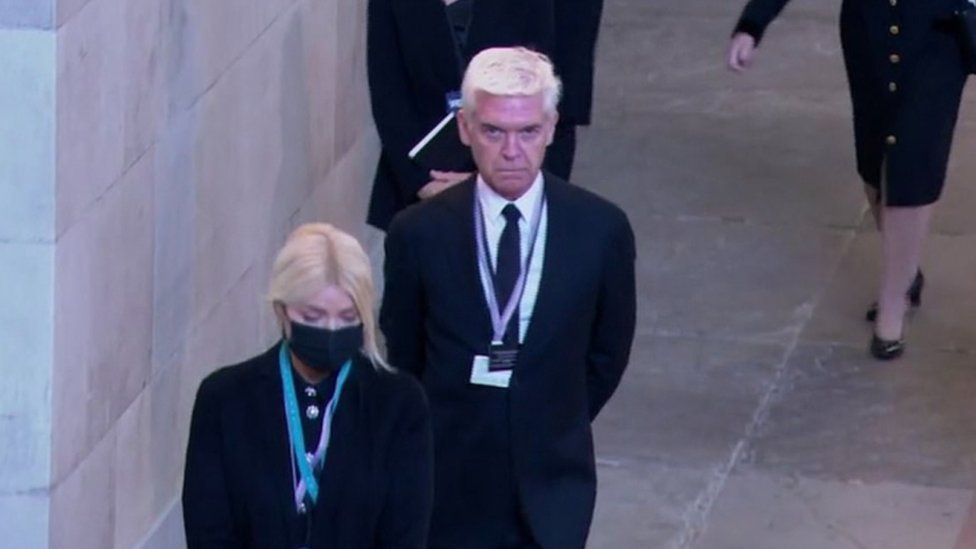 This Morning host Holly Willoughby has said "we would never jump a queue" after being accused of skipping the line for the Queen's lying-in-state.

The ITV presenter and her co-host Phillip Schofield were accused online of avoiding the wait to file past the Queen's coffin in Westminster Hall.

People stood for many hours in a line that stretched miles across London.

In a special This Morning programme on the Queen, Willoughby said their visit was "strictly for reporting".

The social media backlash came after the presenters were spotted on Friday on a live feed that streamed the lying-in-state at Westminster Hall.

Speaking on Tuesday morning during a segment recapping events since the Queen's death, Willoughby said she and her co-host were accredited as broadcasters to be able to enter the hall.

She said: "Like hundreds of accredited broadcasters and journalists we were given official permission to access the hall.

"It was strictly for the purpose of reporting on the event for millions of people in the UK who have not been able to visit Westminster in person.

"The rules were that we would be quickly escorted around the edges to a platform at the back.

"In contrast, those paying respect walked along a carpeted area beside the coffin and were given time to pause.

"None of the broadcasters and journalists there took anyone's place in the queue and no-one filed past the Queen. We of course respected those rules.

"However, we realise that it may have looked like something else, and therefore totally understand the reaction. Please know that we would never jump a queue."

The segment also showed Willoughby and Schofield outside Parliament reflecting on the atmosphere of the lying-in-state they had just witnessed inside Westminster Hall.

Accredited journalists were escorted to an area at the back of that hall where they could gather material for a set time.

In the live stream footage, the presenters were seen wearing lanyards with press passes.

Willoughby's statement comes after people complained on social media that the two presenters appeared to have been "fast-tracked", in contrast to some members of the public who had to wait overnight in long queues.

One person who had waited in line said: "My 12-year-old daughter queued with us for 13 hours overnight...

"I can't believe this sorry excuse for a justification from ITV and that Holly and Phillip have gone along with this."

Comparisons were also made with former England captain David Beckham and fellow ITV presenter Susanna Reid, who queued along with the public for hours.

Schofield did not comment on the backlash during Tuesday's programme but said observing the Queen's lying-in-state was one of the "most profound moments" in his life.

An ITV spokesperson said: "Any allegations of improper behaviour are categorically untrue."

In a statement a UK Parliament spokesperson confirmed they did give media accreditation to journalists who requested access to Westminster Hall "for the purpose of reporting on the event for the millions of people in the UK and globally who haven't been able to visit Westminster in person".