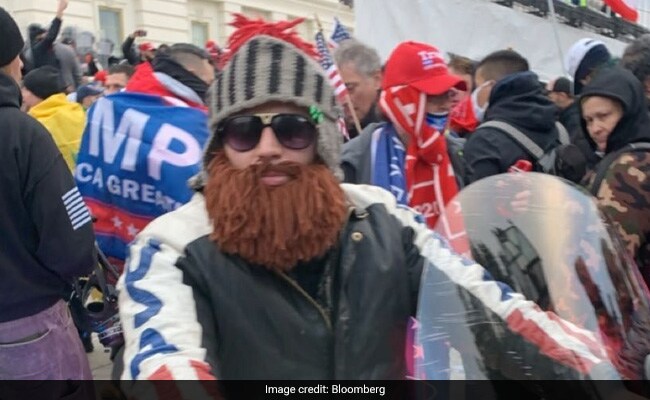 He Came To See Trump Speech, Ended Up In Senator's Office, Smoking Joint

But within hours of watching Trump's speech, Fellows had his feet propped up on a table in the office of a U.S. Senator, smoking a joint. He roamed the halls of the Capitol, heckled police officers and posted videos along the way on Snapchat.
Brandon Fellows had never attended a Trump rally before last week. He said he was motivated to drive to Washington after seeing a tweet from the president. "Big protest in D.C. on January 6th," President Donald Trump wrote on Dec. 19. "Be there, will be wild!"

Fellows didn't know about a planned march that would eventually overtake the U.S. Capitol. He said he had simply come to see Trump give a speech.

But within hours of watching Trump's speech, Fellows had his feet propped up on a table in the office of a U.S. Senator, smoking a joint. He roamed the halls of the Capitol, heckled police officers and posted videos along the way on Snapchat.

"I have no regrets," said Fellows, a 26-year-old former grocery store worker from upstate New York who now makes money cutting trees and repairing chimneys. "I didn't hurt anyone, I didn't break anything. I did trespass though, I guess."

Indeed, in the days since the upheaval, Fellows said his profile on the dating app Bumble is "blowing up" after he posted pictures of himself at the Capitol.

Fellows was among hundreds of Trump supporters who broke into the Capitol on Jan. 6, forcing Vice President Michael Pence, members of Congress and their staffs into hiding. Five people died in the melee, including a rioter who was shot by police and a Capitol Police officer from unspecified injuries suffered during an altercation with the intruders.

Fellows's story provides a detailed account of how one Trump supporter ended up participating in the Capitol riot, an event that has spawned mass condemnation and prompted House Democrats to pursue impeachment for a second time in less than two years.

His story also offers a real-world example of a Trump supporter who absorbed false information on social media and heeded the president's call to take action. It's an illustration of why so many technology companies have taken steps since the Capitol riot to crack down on conspiracies that have proliferated on its platforms, including Twitter's ban on Trump's account.

Fellows, who lives in a converted school bus, said he stopped working last spring because of fears of Covid-19. But he said he became disillusioned when New York state denied him unemployment benefits. "For a while, in early March and April, I was super poor," he said.

Fellows said he gets much of his news from conservative commentators on YouTube, including Ben Shapiro and Steven Crowder. He said he has also started watching Newsmax and One America News, which have both promoted false claims of a rigged election.

He said his political views have created friction with his family, so much so that on Christmas Day only his grandparents invited him to dinner. They asked him to eat on his bus because he didn't take Covid-19 seriously enough, he said.

At the Capitol, he said, even though many of the rioters were people he wouldn't normally get along with, it "felt like family."

"We were there for one common cause, which is making a statement that the government is crushing down on us," he said.

His stepfather of 14 years, Timothy Monroe, said he wasn't surprised when he learned that Fellows was inside the Capitol. "He knows what he believes," Monroe said. "You can't really change it with any kind of reality."

Fellows said he came to D.C. in part because he believes that the election was rigged. But his primary motivation was his anger at government measures to prevent Covid-19, such as lockdowns of restaurants and gyms.

On Jan. 6, Fellows said he arrived outside of the Ellipse, a park adjacent to the White House, just after 1 a.m. He was one of the first people in line to get into Trump's rally and sat just five rows away from where the president spoke, video shows. Fellows came prepared for the cold weather, wearing snow pants, a leather jacket with an American flag emblazoned on the back and a knit hat that resembles a knight's helmet and beard.

"This is the last stand," Fellows said, in an interview with a Bloomberg News reporter prior to Trump's speech. "I feel like I've seen a lot of the election fraud evidence, and I don't understand why nothing is being done." Trump's claims of election fraud in the Nov. 3 election have been rejected by state and federal courts, as well as some members of his own party.

Following the conclusion of Trump's speech, Fellows joined in on the march on Pennsylvania Avenue, headed toward the Capitol. "I was like 'Oh cool, there's gonna be a march,'" he said. "I've never been in a march."

By the time he arrived, he said the barriers protecting the perimeter had already been overrun. As he was scaling a wall to reach the Senate side of the Capitol, he said he was thinking, "I'm not missing this, this is history." Fellows helped others climb over the wall, videos show.

Fellows said he watched a fellow Trump supporter bashing in a door at the Capitol with a cane and eventually break through the door. A crowd of rioters pushed through only to be pushed back outside by police officers. Once the building was overrun, he said he initially hesitated before going in but did so after hearing that people inside weren't being arrested. He got in through a broken window.

In the 30 minutes or so he was in the Capitol, he filmed dozens of videos and posted them on Snapchat.

In one of them, which was reviewed by Bloomberg News, he heckled Capitol Police officers who weren't wearing helmets.

"Where's your helmet, bro?" Fellows asked an officer. "I wasn't issued one, because they ran out," the officer replied.

"They don't care about you? Are you guys rookies, is that why?" Fellows shot back. "I've been here eight years," the officer said. "Pretty cool what happened here today," Fellows replied.

In a video posted to Twitter, Merkley surveyed the damage in his office in which a door was smashed "off its hinges" and artwork was torn from the wall. "It was unlocked, they could have simply opened the door," Merkley said. "So count this office trashed."

After leaving Merkley's office, Fellows said he wandered the Capitol and asked a police officer for directions to the National Statuary Hall. The police officer explained that the statues represent each state and provided directions on how to get there, according to Fellows's video of the encounter. "Dude, you're super cool," Fellows said.

Fellows's interactions with police officers inside the Capitol led him to believe there wouldn't be consequences for going inside. "Did I think I was going to get in trouble?" Fellows said. "Uh, no."

After leaving the Capitol, Fellows posed for pictures next to a line of police officers in riot gear and on an abandoned police motorcycle.

He said he is planning to return to Washington for more protests surrounding President-Elect Joe Biden's inauguration on Jan. 20, and he predicted there would be more violence. The FBI issued a warning that there are plans for armed protests in D.C. and at all 50 state capitals in the days leading up to the inauguration.

"Obviously Trump started a movement in a way, but I think we started something even bigger by doing this," Fellows said. But now the law enforcement is rounding up others who participated in the Capitol intrusion, he believes he too may be arrested.

"Do you think I'm going to go to federal prison?" Fellows asked. "I was told federal prison is not fun."
#Donald Trump  #COVID-19  #Joe Biden  #Covid

General Butler 12 days ago
If this guy had been BLM or Antifa and the capitol intrusion was in protest of election theft by Trump, this fellow would be lauded by the mainstream press, and probably by Congress itself, as representing the best of American values, a lover of freedom, and protector of the republic. If Obama were president he would be considered for the American Medal of Freedom.
View all comments (1)Add comment