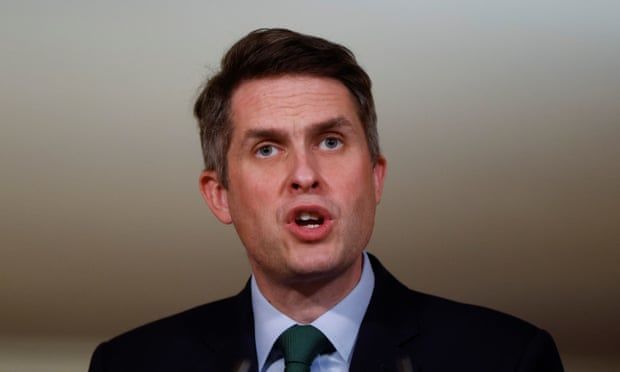 Williamson nominated his policy adviser at the Department for Education (DfE), Jo Saxton, to be the next chief regulator of Ofqual, despite Saxton’s lack of experience in contrast to recent appointees with distinguished careers running regulatory agencies.

Saxton joined the DfE in March 2020 and was a ministerial policy adviser to Williamson throughout the A-level and GCSE grading chaos last summer that saw Ofqual’s then chief regulator, Sally Collier, resign amid controversy.

Kate Green, the shadow education secretary, said: “During Dr Saxton’s time as his close adviser, Gavin Williamson oversaw last summer’s exams fiasco and U-turned on holding exams this year. But once again we see the Conservatives handing a plum role to a close adviser who lacks the track record for the job.

“Thousands of students rely on Ofqual for the successful running of exams each year. Without the heavyweight experience of her predecessors, the DfE has serious questions to answer about Dr Saxton’s selection before the public can have confidence in her ability to take on the responsibilities of this office.”

Students in England will receive A-level and GCSE grades assessed by their teachers for the second year in a row, after Williamson cancelled formal exams in January. The government was heavily criticised for failing to draw up contingency plans in the event of a second lockdown, with Williamson insisting that exams would go ahead.

Saxton faces a confirmation hearing by the education select committee of MPs on Tuesday, and if appointed will be in Ofqual’s hot seat when A-level and GCSE results are announced in August.

A DfE spokesperson said: “Dr Jo Saxton is a qualifications expert who has made a significant contribution to education, including as a multi-academy trust leader, Ofqual board member and now government adviser on education policy – including work on qualifications and the regulation of schools.

“The department ran an open recruitment competition and assessment process, led by a panel and conducted in accordance with the governance code on public appointments.”

But Labour says Saxton’s nomination is part of a disturbing trend of allies and supporters being appointed to independent oversight posts. Williamson has recently appointed James Wharton, the former Conservative MP who sits as a Tory peer in the House of Lords, as chair of the Office for Students, the higher education regulator, and Rachel de Souza, the former head of an academy chain founded by a Conservative peer and donor, as children’s commissioner for England.

Saxton’s CV shows that in 2012 she was appointed chief executive of Future Academies, a chain of schools founded by Lord Nash, the Conservative party donor who served as schools minister in the House of Lords under Michael Gove. In 2013 Saxton’s trust was embroiled in controversy when it appointed an unqualified 27-year-old with no experience as a headteacher, who resigned four weeks later.

In 2016 Saxton left to start Turner Schools, a multi-academy trust in Kent that administers five schools, including three primaries, before leaving in early 2020 to join the DfE as policy adviser.

Saxton has also been a director of the New Schools Network, the DfE-backed advocate for free schools, and was an adviser to the pro-academy lobbying group Parents and Teachers for Excellence.

Saxton earned the title of doctor after completing a PhD in art history from New York University, after an undergraduate degree in the subject from the University of Cambridge. She was previously a pupil at St Paul’s Girls, the independent school in London.

Previous Ofqual chief regulators had significant legal or regulatory experience: Sally Collier, the previous chief regulator, had been head of the Government Procurement Service, while Glenys Stacey held a string of senior roles, including the establishment of the Criminal Cases Review Commission.

One senior exam board official said Saxton was experienced in “making things happen” in Whitehall and that her choice of priorities and advisers would be important. But another official was more dismissive: “Either Saxton’s advice to Williamson last summer was good and he ignored it, or it was bad advice and he followed it. Neither bodes well for Ofqual.”
Add Comment