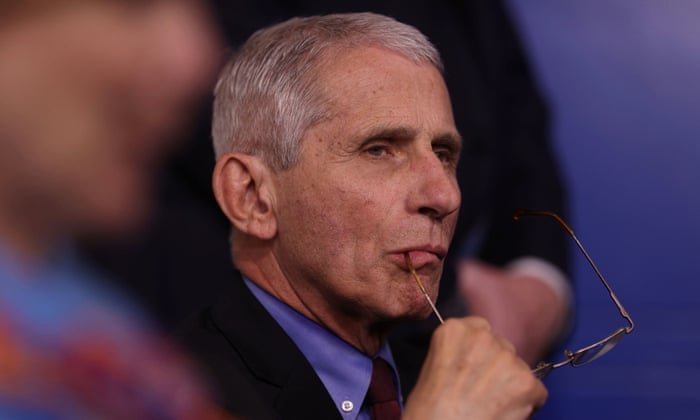 Fauci warns coronavirus could kill as many as 200,000 Americans

“I mean, looking at what we’re seeing now, I would say between 100,000 and 200,000 … deaths,” Fauci told CNN’s State of the Union, though he added: “I just don’t think that we really need to make a projection, when it’s such a moving target that you can so easily be wrong and mislead people.”

According to researchers at Johns Hopkins University, by Sunday morning the US had confirmed nearly 125,000 cases of Covid-19, a respiratory illness especially dangerous to older people and those with health problems, and 2,188 deaths. In New York, the state worst hit, Governor Andrew Cuomo on Sunday announced a death toll of 965, 237 up on the figure the day before.

The US has the most confirmed cases of any country. Nearly 700,000 cases have been confirmed worldwide and about 32,000 people have died.

CNN’s Jake Tapper asked Fauci about Trump’s suggestion on Saturday of quarantining New York, New Jersey, and Connecticut, an idea ultimately abandoned in favor of a strong advisory urging residents not to engage in non-essential travel.

“We had very intensive discussions last night at the White House with the president,” Fauci said.

“As you know, the original proposal was to consider seriously an enforceable quarantine. After discussions with the president, we made it clear, and he agreed, that it would be much better to do what’s called a strong advisory.

“And the reason for that is that you don’t want to get to the point where you’re … enforcing things that would create a bigger difficulty, morale and otherwise, when you could probably accomplish the same goal.

“One of the issues is that the infection rate in New York City, in the New York City area, is about 56% of all of the new infections in the country are coming from that area. That’s terrible suffering for the people of New York, which I feel myself personally, as a New Yorker.

“So what was trying to be done is to get people, unless there’s necessary travel, so, all nonessential travel, to just hold off, because what you don’t want is people traveling from that area to other areas of the country, and inadvertently and innocently infecting other individuals.

“We felt the better part of – way to do this would be an advisory, as opposed to a very strict quarantine. And the president agreed. And that’s why he made that determination last night. And I believe he tweeted it out last night.”

Trump did so after New York’s governor, Andrew Cuomo, told CNN it would lead to “chaos and mayhem” and amount to a “federal declaration of war”.

Also on Sunday morning, Dr Deborah Birx, the White House coronavirus taskforce coordinator, said on NBC’s Meet The Press that Covid-19 would affect the entire US.

“We’ve been raising the alert in all metro areas and in all states,” she said. “No state, no metro area will be spared.

“The sooner we react, and the sooner the states and the metro areas react and ensure that they put in full mitigation, at the same time understanding exactly what their hospitals need, then we’ll be able to move forward together and protect the most Americans.”

Fauci and Birx’s comments stood in contrast with Trump’s expressions of optimism.

The president’s statements suggesting that parts of the US could reopen by Easter were opposed by public health officials, as well as state and local authorities, who have repeatedly emphasized that things are poised to get far worse, not better, in the near future.
#COVID-19  #Covid  #Coronavirus
Add Comment