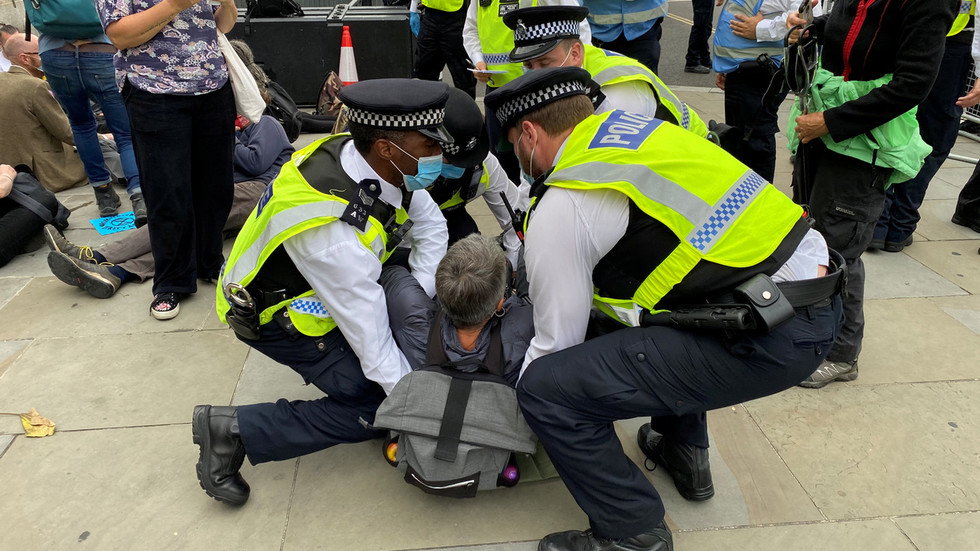 Eco-activists from the Extinction Rebellion group glued themselves to the street, blocking several entrances to the British parliament in London, to pressure MPs to support an “emergency” climate bill.

Dozens of the activists were filmed sitting on the pavement and holding hands. A large police contingent was deployed to the scene to unglue them, with the numbers of the officers soon exceeding those of the demonstrators.

Breaking: Extinction Rebellion activists have blocked off at least two entrances to Parliament by gluing themselves to the ground. @LBC pic.twitter.com/Zq663ecfsh

Several people were arrested, according to Reuters.

It’s a similar scene up by carriage gate as well pic.twitter.com/3fmfYM9eS9

The climate activists also parked a livestock truck outside the Department of Health. The vehicle had pink signs reading, “Animal Farming = Pandemics and Climate Crisis,” attached to its sides.

We have a slaughter truck blockading the road outside the Department of Health and Social Care.

A message on each side of the truck reads: “ANIMAL FARMING = PANDEMICS & CLIMATE CRISIS”#Covid19 #Pandemics #ClimateCrisis #AnimalRebellion #ExtinctionRebellion @XRebellionUK pic.twitter.com/U9DtIwZSny

The theatrical acts of civil disobedience are part of 10 days of protests to “peacefully disrupt the UK Parliament in London,” earlier announced by Extinction Rebellion. The group is pushing for lawmakers to back the ‘Climate and Ecological Emergency Bill’ which, the activists insist, would force the British government to “[account] for our entire carbon footprint while actively conserving nature here and overseas.”

Specialist officers are working to remove protesters who have glued themselves to a vehicle in central London.

They are highly trained to carry out removals whilst ensuring the safety of the those involved.

Dozens of arrests linked to the protests have been made so far today pic.twitter.com/KYMiQz1K6P