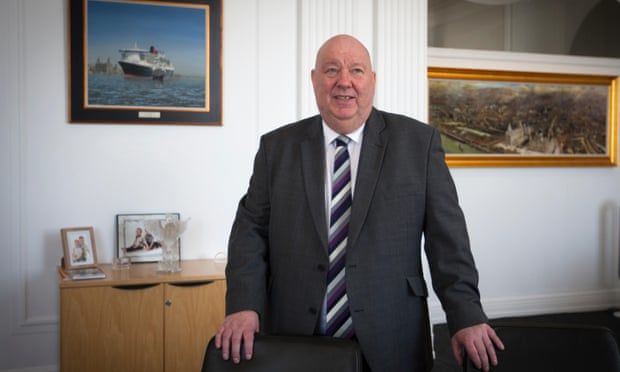 Force launched inquiry in 2013 after allegations of financial irregularity over fleet maintenance contract
Joe Anderson, the former mayor of Liverpool, has been told he is no longer under investigation by Lancashire police.

Anderson was interviewed under caution towards the end of 2017 as part of Operation Sheridan, an investigation launched in 2013 after financial irregularity concerns were raised over the awarding of a fleet maintenance contract.

A separate investigation by Merseyside police into allegations of bribery and witness intimidation is ongoing.

Over the weekend, Anderson tweeted that Lancashire police had “discontinued” their interest in him and would be taking no action.

The force said it had written to four men and informed them they were no longer under investigation as part of Operation Sheridan. “The four, aged 64, 68, 66 and 62, were contacted last month and told they would face no further action,” it said.

“Operation Sheridan was launched in 2013 following allegations of financial irregularity made to the constabulary by Lancashire county council. On completion of the investigation, we referred the matter to the Crown Prosecution Service, who are currently considering potential offences in relation to four other individuals.

“We would like to remind all concerned that criminal proceedings in this matter remain active. It is extremely important there should be no reporting, commentary or sharing of information online which could in any way prejudice any future proceedings.”

Anderson, 64, was first elected as a Liverpool city councillor in 1998, becoming leader in 2010. He became Liverpool’s first directly elected mayor in 2012, and had been reselected as Labour’s candidate to fight the local election in May 2021, a vote that was postponed from 2020 because of Covid.

He was arrested by Merseyside police in December 2020 as part of a different inquiry, Operation Aloft, investigating allegations of bribery and witness intimidation linked to building deals in Liverpool. That investigation is ongoing.

His arrest led to Anderson stepping aside as mayor and announcing he would not be seeking re-election. At the time he said the police investigation would “confirm I have done nothing wrong, and my name and reputation will be exonerated”.

Anderson said he would continue to fight to prove his innocence and to protect his legacy as mayor of his home city.

He wrote: “It has been a great privilege to represent the Labour party and be part of a collective movement that represents people like me growing up in, and trying to find a way out of, poverty.”
#Covid
Add Comment