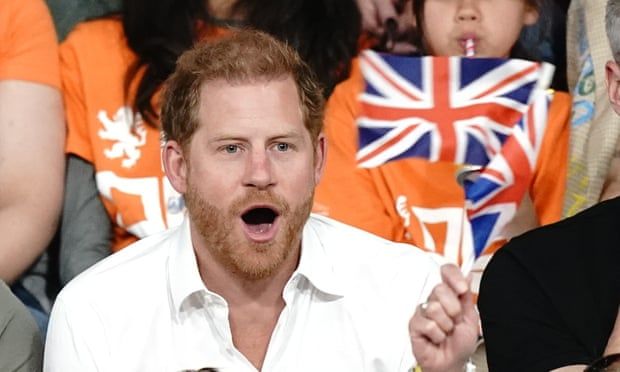 Everyone knows the Queen hates a fuss – except, strangely, her most loyal defenders

Prince Harry’s comments about visiting his grandmother have provoked uncontrollable fury among Elizabeth II superfans
Like all truly patriotic Britons, I hugely enjoy how mad Prince Harry makes some people. Mad in both the British and American senses of the word. More than two years after he stepped back from royal duties to become yet another boring Californian, seemingly every utterance of Harry’s induces proper steam-out-of-the-ears stuff in a whole demographic of British people who insist they never want to hear another word from him – yet absolutely refuse to simply stop reading about him.

Is HRH doing it on purpose, like some clever, extremely high-status troll? That’s a nice idea, but feels unlikely. The Windsors have never exactly been fabled for their intellects. It’s possible the situation is actually extremely uncomplicated: Prince Harry just wibbles out some stuff every now and then, at which point millions of grownups are completely unable to handle it.

Either way, the Duke of Sussex’s latest act of treason seems to have been calling in on the Queen on the way to his Invictus Games for disabled former soldiers, held this week in the Netherlands. Not only did Harry later reveal that he and his grandmother had had a good-humoured tea – decried as oversharing by the sort of former aides who lucratively betrayed all his mother’s secrets – but he explained he’d been “making sure that she’s protected and got the right people around her”. Can’t be sure what he’s on about. Perhaps he saw the Queen being walked to her Westminster Abbey seat at Prince Philip’s memorial by the Duke of York, about 10 minutes after she’d forked out for some of his multimillion-dollar sex assault case settlement, and wondered if she was being advised by some kind of paedo Oliver Cromwell.

Whatever the import of Harry’s comment, though, it has caused a huge number of pants to be wet, and whole fleets of prams to be emptied of toys. You cannot move for corpulent royal experts hissing about it all as they bank another appearance fee, while Britain’s leading body language authority wheels herself out to explain that Kate and William look “subdued” because of the “emotional exhaustion” she reckons was caused either by Harry, or by the fact they were visiting a Ukraine charity. (What a huge amount the rigorous science of body language can tell us.)

However, in a country where millions act as if they know the Queen socially, people were always going to claim their chief concern was for the monarch, who celebrated her 96th birthday this week. “How CAN he do this to the Queen?” they always demand, apparently unwilling to realise that anyone who really cared about the Queen’s supposed feelings would simply avoid making it worse by ranting about the situation on every available airwave. That would surely be the most civilised course of action. After all, if a real-life friend of ours has an irksome relative we regard as potentially upsetting to them, we don’t spend their birthday wanging on about him.

So the logic escapes me. If newspapers and TV pundits were simply trying to sell clickbaity content to be consumed by messy bitches who live for the drama, that would be one thing. But nothing – nothing! – could be further from the noble truth. As they never tire of telling us, they utterly REVERE the Queen. In which case, surely they should conduct themselves with a baseline level of social tact? The true, committed royalist would ignore Harry’s pronouncements completely. We ignore most of the other Californians; it can’t be beyond our famous British reserve. As close personal strangers to the Queen, we know the one thing of which we can be absolutely sure is that she wouldn’t want a fuss about it all.

Yet a fuss is endlessly made. No snowflake in an avalanche ever feels responsible, as the saying goes, but maybe the provisional wing of the Elizabeth II fandom ought to suppress the urge to call in furiously to a phone-in, or post furiously online, in order to spare this 96-year-old woman the endless drama? If not, I’m not sure how much longer we can keep taking lectures in duty and service from people too emotionally incontinent to prevent themselves being exercised by a Dan Wootton article.

If they can’t commit to ignoring Prince Harry’s supposedly incendiary pronouncements, it’s past time for every single one of them to admit to themselves the truth: that they love the drama of the royal soap opera, and relish every new half-baked opportunity to re-enter the outrage cycle. As I say, I myself adore it. I am completely with the Bloomsbury group diarist Frances Partridge, who characterised people’s reaction to the death of George VI as “richly revelled-in emotional unbuttoning”. “What the public is feeling is a sense of great drama,” she noted, “not at all unpleasant.”

Well quite. What a sadness, then, that the great British public remains too repressed to acknowledge this as far as Prince Harry is concerned. Instead, many feel more comfortable using the feelings of the Queen as a figleaf, at the same time as taking none of those feelings into account. So as she enters her 97th year, one of the greatest public services Her Majesty performs is serving as the proxy for all sorts of desires and impulses that her people lack the honesty and self-awareness to admit. What an exhausting job that must be at her age – but of course her heartless “fans” will never permit her to retire.
Add Comment